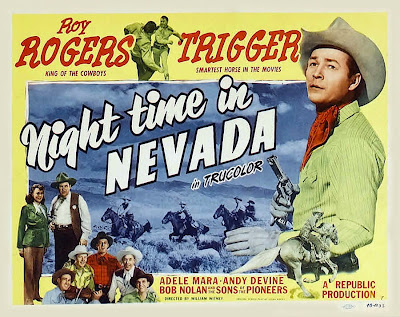 Because the ‘rents were nice enough to bestow upon me a wonderful Christmas gift of two honkin’ big DVD collections of B-westerns (America’s Greatest Westerns Volume 3 & 4) last December, I’ve been wanting to watch some of the content and write up some of these nifty little oaters for the blog for quite a while now.  And then my muse whispered into my ear: “Why not do this every Hump Day and call the feature ‘B-Western Wednesdays’?”  (Okay…maybe not the most clever or inspirational of muses…but all the good ones were taken.) 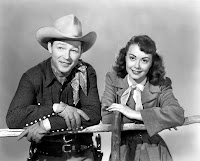 So I decided to inaugurate this feature with a film starring my favorite of the B-western heroes—none other than the “King of the Cowboys” hizownself, Roy Rogers.  I’m on the record as saying that while I certainly can enjoy an oater starring “’s favorite cowboy,” Gene Autry…I always preferred because he was a better actor (and better singer, to be honest).  And yet Autry played an important role in jump-starting ’ film career; (billed alternately as “Dick Weston” and his real name, Leonard Slye, at the time) made his earliest movie appearances in several Autry films as a member of the Sons of the Pioneers.  When Autry got into a tiff with his movie studio, Republic Pictures, and walked out on his contract the studio went auditioning for replacements…and lo and behold, Roy Rogers was born.

My favorite Roy Rogers pictures are the ones he made toward the end of his stay at Republic; together with ace serial director William Witney, he appeared in a series of action-oriented westerns that appealed both to adults and his loyal Saturday matinee fan base…and yet retained many of the elements of the oaters he appeared in since his starring debut, Under Western Stars (1938)—songs, comedy relief, etc.  Night Time in Nevada (1948) is a superb example of the kind of vehicle I enjoy—it would be among my first choices of movies to show any individual who’s not normally a fan of the genre. 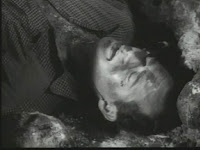 Ran Farrell (Grant Withers) has been corrupted by the shiny precious metal known as gold—and he’s hatched a plan to dispose of his partner, Jim Andrews (James Nolan), by dynamiting the mine at which the two men are working (banking on Andrews being killed in a cave-in).  Andrews doesn’t immediately draw his rations, however…with his dying breath, he asks Farrell to keep an eye on a trust fund that consists of the money from the gold he’s saved, and to make certain his young daughter Joan gets the inheritance when she turns 18.  (Farrell then demonstrates that he’s just the man for the job by concealing Andrews’ body in a mine that has turned out to be utterly worthless…carelessly leaving not only a lucky money piece bearing Jim’s name but an article of his clothing hanging on a tree.  We will return to this, by the way) 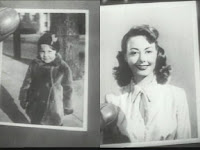 With the passage of time, we learn that Ran has been dipping into Joan’s account—which shouldn’t come as any huge surprise, since a guy what croaked her pa is probably not someone you’d entrust to keep watch over a tidy sum—and that Joan is headed to Nevada claim her inheritance.  Farrell tells a panicky (and oh-so-very-crooked) lawyer named Jason Howley (George M. Carleton) that he has everything under control—he knows that a gi-normous herd of cattle to be sold will be traveling by train and that all he has to do is hijack the bovines, sell them and replenish the missing trust fund with the ready cash.  Farrell and his henchmen succeed with their illegal cattle acquisition…but during the hi-jacking, a beloved train engineer named Casey (Joseph Crehan) is rubbed out.

Casey was a pal to retired state policeman Roy Rogers…who is also the owner of the cattle, along with his ranch hands, The Sons of the Pioneers (Bob Nolan, Pat Brady, Tim Spencer, Lloyd Perryman, Karl and Hugh Farr).  rides into town, looking for information on his friend’s death…and in doing so, gets himself reinstated into the agency by Sheriff Cookie Bullfincher (Andy Devine), who for the purposes of this film provides the comic relief.  and Cookie, disguised as tramps, travel out to a hobo’s camp to ask some of its inhabitants what they know about Casey’s murder, but they are unable to help.  (However, it’s not a total loss—one of the tramps is played by Hank “Fred Ziffel” Patterson, who does a little shuffling footwork to ’s rendition of Big Rock Candy Mountain.)  Our heroes then run into Joan Andrews (Adele Mara) on their way back to town; Joan and her gal pal Toni Borden (Marie Harmon) are on their way to claim Joan’s inheritance, traveling by trailer.  (Toni is Joan’s comedy relief—because why shouldn’t the leading lady get the same perks as ?)  and Cookie surreptitiously hitch a ride with the two women after first being refused a lift by sneaking into the trailer, and a wildly comic action sequence results with them being bounced around when the girls get wise to their shenanigans.
After explaining to Roy how she and Toni happen to be so far west, Joan pays lawyer Howley a visit to set in motion receiving her fundage…and the wily shyster stalls her by telling her that there is much paperwork to be filled out (I’s crossed, T’s dotted) because in actuality—there are insufficient monies to replace what that rat bastard Farrell has swiped out of her trust fund.  Joan goes on her merry way, but the treacherous Ran has decided that he wants all of the money…and makes plans to eliminate Joan and Toni while they sleep peacefully in their trailer.  He just so happens to spot this outside the rig: 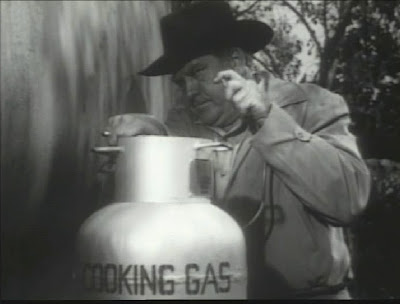 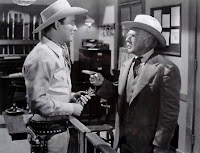 Subtle it is not.  But fortunately for the girls, rides out to deliver a telegram to Joan and catches Farrell doing his deviltry…and gives him a right pummeling in the process.  Then, he instructs his trusty golden palomino Trigger to keep an eye on Farrell (“Watch him, Trigger!”) while he checks on the girls (I swear I’m not making that up)…so Farrell decides to make tracks for the horizon.  He’s just wasting his time—Roy and “the smartest horse in the movies” easily catch up to the evil Farrell, and Ran is locked up in the town pokey, over the strenuous protests of lawyer Howley.

Howley can do nothing for his client until after Roy and the Pioneers serenade the ladies with the title tune.  By morning, however, the devious Howley has hit upon a surefire way of springing his client: they inform and Cookie that Farrell is not who he says he is—he’s actually Jim Andrews, Joan’s father!  (Suffering synopsis, Batman!)  Farrell gives the two lawmen a cock-and-bull story about how he concealed his identity because he had once served a stretch in the pen, and had promised Mrs. Andrews that he would keep his jailbird past a secret from his daughter.  releases “Andrews” (knowing full well Ran is full of it) but goes out to the location of the gold mine with Joan to see if he can find out what happened to “Farrell.”  Once there, Roy and Joan the previously mentioned discarded objects that had belonged to her father and conclude that Farrell is responsible for murdering her pa.

Roy and Joan were trailed to the mine by a weaselly henchman named Mort (Holly Bane), and Mort rides back to Howley’s office to report on their activities.  As Roy and Cookie make plans to ship out the last of Roy’s cattle, Farrell, Howley and Mort dupe Joan into thinking Roy has been killed (this is accomplished by her being held prisoner in an adjoining room while Farrell and his goons do a little “play acting”—but it becomes a little too real when Farrell dispatches Howley with his shootin’ iron) and that they’re planning to hijack the cattle train at station called Devil’s Pass.  Roy hides in the cattle car to surprise Farrell and Company—but Farrell and his men are actually planning to jump the locomotive at a different junction, and carry out their nefarious bad guy work while Cookie, Joan and the SOP (Sons of the Pioneers) are waiting at the wrong place.  It looks hairy for our hero—particularly when he would appear to be outgunned—but his friends come to his rescue in the nick of time, and that no-goodnik Farrell gets his comeuppance falling into a crevasse (where he is presumably devoured by pumas) after an exciting knock-down, drag-out fight with Roy behind the wheel of a fleeing truck.

Despite its occasional plot contrivances and coincidences (the screenplay was penned by Sloan Nibley, who also authored such classic Rogers westerns as The Far Frontier and Quentin Tarantino fave The Golden Stallion), Night Time in Nevada is a most entertaining western—an artifact of a bygone era when the good guys and bad guys were easily delineated, and a hero cared more for his horse than he did his lady friend.  The print of Night Time is even in fairly good shape for a public domain offering, though it’s presented here in black-and-white because the original Trucolor (an inexpensive alternative to Technicolor owned by Republic) print wasn’t available (there are a number of Rogers’ Trucolor films that only exist today in black-and-white versions).  The movie is for the most part intact—I clocked the running time at about 67 minutes, which seems to jibe with the info at the always reliable IMDb.  (There is also a truncated 54-minute version of this movie floating around; so it’s nice to have the full version even in its monochromatic form.)  The dark tone of Night Time is considerably lightened by some great musical numbers (my favorite is Over Nevada, written by Pioneer Tim Spencer and performed by the group as they make repairs to a fence on the ranch) and reliable comedy relief (Devine, Harmon and Pioneer Pat Brady—a few years before he became Roy’s TV sidekick).  If you can find the 2003 DVD release of this film at a good price I’d recommend it—Oldies.com also has a version that they released in 2009 (paired with Roy’s The Man from Colorado) at a tariff that’s easier on the wallet.
Posted by Ivan G Shreve Jr at 5:00 PM

An excellent review of one of my favorite Rogers films. If you have a copy of "Eyes of Texas" (1948), check it out someday. It's a good one!

Way to go there Ivan.I sent your the link to our Western Trails so all the fans can enjoy your writing skills and insights into the B- Westerns Your pal ... Fuzzy

That's a great idea for a weekly feature. I enjoy this kind of Western too - my favorite period of Roy's career is the early '40s (1942 was a particularly good year), but I also like some of the Witney films. The musical numbers are the highlights for me!

Not a fan of B-westerns, but I enjoyed reading your review. I like Andy Devine, too.