“Not too heavy, not too light, eat more fish, sits just right...”

The underrated screwball comedy classic Theodora Goes Wild (1936) turns 75 today, and in honor of its diamond anniversary I was asked to commemorate the occasion at Edward Copeland on Film…and More.  The film stars Irene Dunne as a small-town girl whose secret—she’s penned a scandalously risqué novel—is exposed by the book’s illustrator (played by Melvyn Douglas), who falls in love with her after the usual set of complications so common to screwball comedies, of course.  Theodora is an exhilaratingly entertaining film (even Douglas isn’t too annoying) written by Sidney Buchman (from Mary McCarthy’s story) and directed by one of the fathers of “the Method,” Richard Boleslawski…and features a first-rate supporting cast including Thomas Mitchell, Thurston Hall, Rosalind Keith, Elisabeth Risdon, Margaret McWade, Spring Byington and Robert Greig.  (He’s not credited, but TDOY’s favorite Bowery Boy, William “Whitey” Benedict is also in this one as Mitchell’s sidekick at the newspaper.) 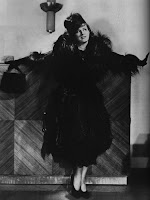 On a list of actresses who never won competitive Academy Awards for their emoting (I’m leaving out Honorary Oscars, of course), Irene Dunne would surely rank near the top—despite being nominated five times (Theodora was her second) she never took home a trophy for her mantle.  She should have got one for The Awful Truth (1937), but you could also make a strong argument that she got robbed for this movie as well because, quite honestly, every moment she’s onscreen it’s impossible to take your eyes off of her.  And the clothes she models in the second half of the film—simply amazing.  If you haven’t seen this movie, get thee to a video rental outlet posthaste…and if you have, why not spend some time this evening revisiting it.  You won’t be sorry.

Ivan, I'm not as up on my screwball comedies as I'd like to be, but your review of THEODORA GOES WILD has encouraged me to catch up with it as soon as I can! Excellent blog post!