By Philip Schweier
Allow me to say up front that this review is spoiler-filled, so if you’d rather not have the movie ending ruined for you, it’s best to move along. I normally don’t do that, being a mystery fan myself, but in this instance, I’m taking my cue from the filmmakers themselves, who show little regard for us armchair detectives.
For those who may not recall, the climax of The Thin Man (1934) took place over Christmas, and ended with Nick and Nora Charles (William Powell and Myrna Loy) bound for home. Its sequel begins with their arrival in the morning of New Year’s Eve, where Mr. And Mrs. Charles (and Asta) encounter a number of Nick’s pals – guys with names like Fingers and Lefty. Later, when they pass another open touring car, Nora acknowledges another couple, explaining to her husband, “You wouldn’t know them. They’re respectable.”
Well, respectable and high society don’t necessarily go hand in hand, as we learn from Selma Landis (Elissa Landi), Nora’s cousin. Her philandering husband Robert (Alan Marshal) has been on a bender, drinking and whoring his way along the . Everyone tells her to dump the S.O.B., especially David Graham (James Stewart; yes, that James Stewart), who’s been carrying the torch for for years.

Robert, for reasons that aren’t fully explained, decides it’s time he blew town, accompanied by his latest a fling, Polly Byrnes (Penny Singleton), a nightclub floozy. For $25,000 from David, Robert agrees to give the divorce everyone wants her to have, allowing David free reign to mend her broken heart. However, as the clock strikes , Robert receives a kiss from a .45, by persons unknown. David, devoted to the now widow Mrs. Landis, steps in to protect her from the eventual suspicion that she bumped off her husband. 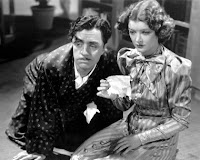 The murder mystery is simple enough, but the writing of the movie sparkles, as we are introduced to Nora’s aristocratic family. To say her Aunt Katherine (Jessie Ralph) has Victorian sensibilities is kinder than the old broad deserves. While the family looks upon “poor Nora’s” marriage to Nick with extreme pity, Nick is eager to trade barbed comments with anyone who cares to stand in the way of his low opinion of high society. Meanwhile, Nora charms Nick’s less-than-reputable pals – except for one who shall remain nameless.
Nick refuses to get involved in the case, but nevertheless finds himself doing a little digging at Nora’s behest. As the case wraps up, Nick gathers all the suspects at Polly’s apartment, revealing that Polly and her no-goodnik brother (Paul Fix) had their hooks into Robert pretty good. It is also demonstrated the suspected murderer has been eavesdropping on the woman, and what follows is an eventual finger pointed at David. 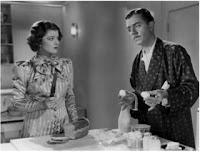 Killing the louse provided him not only with the opportunity to get even for stealing his girl, but also lay the murder at ’s doorstep. It seems David never truly forgave for throwing him over for Robert. Stewart presents a David Graham whose raging jealousy has driven him to the edge of madness, playing against type for the future star.
But what steers the fickle hand of justice in his direction to begin with is he seems privy to information that is revealed in a photograph. Nick Charles, as the detective, has the opportunity to see the photo, but it is never shared with the audience until the very end, denying us viewers a critical clue that would help us solve the mystery. 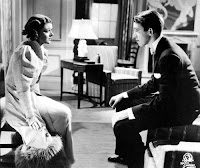 Screenwriters Frances Goodrich and Albert Hackett and director W.S. Van Dyke capitalize on the growing chemistry between Powell and Loy, who are at the top of their game in wit and wonder. In this second installment of the Thin Man series, all the contributors have refined their parts to perfection, offering what I feel is the strongest entry in the entire series.
As for beloved James Stewart turning out to be the murderer, well, he can’t always play the lovable schlemiel George Bailey. After the Christmas treat that is It’s a Wonderful Life, it’s nice to see him spend his New Years exacting a little revenge on the cruel, cruel world.
Posted by Ivan G Shreve Jr at 8:00 AM

I've only seen the first two installments of The Thin Man series, but I think both are highly entertaining. I always enjoy listening to Nick and Nora's conversations...plus, there is always Asta as well.

I watched THE THIN MAN on New Year's Eve and loved it even more than I remember. I guess I'd forgotten just how good it really is. I'm going to watch it several more times before it has to go back to the Big N.

In the meantime, I'm adding AFTER THE THIN MAN to my queue.

I'm not crazy about Stewart being the killer here, it is SO AGAINST TYPE. But what the heck, it's clever.

Thanks for a great review.

Philip and Ivan, I adore all the THIN MAN movies, but the first two are still my all-time favorites in the series! I felt that James Stewart's character was terrific foreshadowing for the darker, more intense roles he played in VERTIGO (don't forget to check out The Lady Eve's A MONTH OF VERTIGO!) and Anthony Mann's Westerns, among others.

I enjoyed this review very much, fellas. If you're interested, I also wrote a review of AFTER THE THIN MAN in 2010. Mine doesn't have spoilers, but I hope you'll enjoy it anyway! :-)

I'm going to watch it several more times before it has to go back to the Big N.

Maybe it's the Jack Webb in me, but in honor of Yvette the DVD behemoth formerly known as "Netflix" will herewith be referred to on this blog as "The Big N."