Children should be seen and not heard 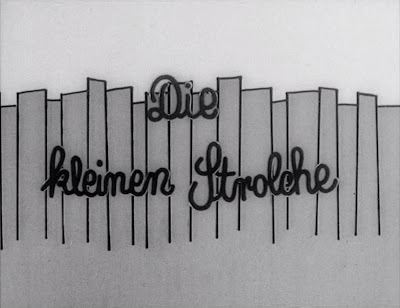 For those of you who passed on taking the German elective, the “Die Kleinen Strolche” in the above screen capture is what the Hal Roach Studios’ Our Gang comedies were called in Deutschland.  On this side of the pond, the famed series is referred to as either “The Little Rascals” or “Our Gang”—though this last appellation usually applies to the fifty-two MGM one-reelers produced from 1938 to 1944; Roach sold the series to Metro-Goldwyn-Mayer and although he eventually bought it back from the mega-studio they kept the rights to the name.  During the original run of Our Gang, beginning in 1922, title cards of the comedies were usually adorned as “Hal Roach presents His Rascals.” 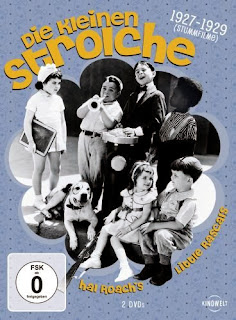 This dissertation on Our Gang is being presented today because I recently purchased a 2-DVD set (yes, at the same time I bought the Max Davidson and Female Comedy Teams collections, thanks for noticing) of fourteen silent Our Gang comedies from 1927-29 (a smattering of the surviving shorts that Hal Roach produced under his new contract with MGM) released by Kinowelt.  While the Roach Our Gang sound comedies have been made available on DVD through RHI/Genius Entertainment, and the MGM one-reelers from Warner Archive, a good set of the silent shorts is often hard to locate.  For instance, the silent Gang comedies that Roach produced for Pathé (1922-28) wound up being sold to National Telepix and other distributors for television, and these people went at the shorts with a chainsaw, removing their main titles and substituting their own (they were televised under various names like The Mischief Makers and Those Loveable Scalawags and Their Gangs).  I’ve bought a set or two of these shorts from various mom-and-pop places and some of them are just a downright mess. 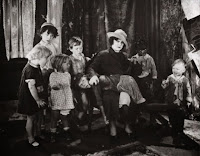 So it’s nice to be able to own a DVD of some of these comedies…the only problem is, they’re from the period when the Our Gang franchise was at a particularly low ebb, in a creative sense.  The series really wouldn’t pick up again until the sound era with additions like Jackie Cooper, Matthew “Stymie” Beard and of course, George “Spanky” McFarland and Carl “Alfalfa” Switzer.  The comedies in this DVD collection feature veteran members like Joe Cobb and Allen “Farina” Hoskins, but you also have kids like Harry Spear and Jay R. Smith (hired apparently because he had more freckles than the departing Mickey Daniels) who really didn’t add too much to the proceedings.  Still, the series continued to be popular with moviegoers…and there are one or two entries that generate some mirth (and a couple that are just flat-out-bizarre), plus the viewer also becomes acquainted with some members who transitioned to the sound era like Jean Darling, Mary Ann Jackson and Bobby “Wheezer” Hutchins. 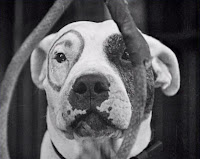 It’s a toss-up between two shorts in this collection for the coveted “What the…front yard?” award.  In Dog Heaven (1927), the Gang’s beloved dog Pete is planning to commit suicide by hanging himself.  (I swear I am not making this up.)  The dog feels betrayed by his owner, Joe, whose attention to his best friend has been diverted to a girl named Clarabelle (it’s always a dame)—he’s even spent the money he was saving to buy Pete a new collar on that fickle female.  The event that buries the camel in a big straw stack is when Pete, having saved Clarabelle from a possible drowning, is accused by several individuals of having pushed the gal into the drink in the first place…fortunately, an eyewitness who viewed the incident from the get-go is able to clear the canine, and Joe and his pals rush back to save his mutt from the rope in the nick of time.  Now…you can’t argue that this isn’t an offbeat short (and its humor is definitely of the jet-black variety, which appealed to me)—and unusual in that it was directed by Robert A. McGowan (a.k.a. “Anthony Mack”), the nephew of frequent Our Gang helmer Robert F. McGowan, who’s considered the least-inspired of the franchise’s directors—but you sort of have to wonder what effect it had on the kids in the audience when it was released in 1927.  (I imagine more than a few wound up in therapy.) 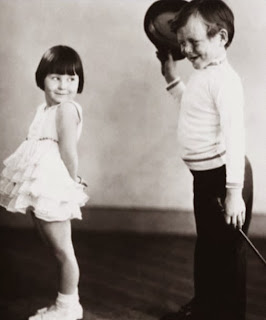 Wiggle Your Ears (1929) is the other two-reeler that will have you scratching your head in wonderment.  Mary Ann Jackson is in love with young Harry Spear, who is able to perform the titular task for her delight…alas, poor Joe is unable to so his love for Mary Ann is continually rebuffed.  But Mary Ann finds herself having to compete with a rival in the form of Jean Darling, who is also captivated by Mr. Spear’s charms.  Harry has Jean in the palm of his hand…until he experiences a cramping of the ears and is unable to per…look, you don’t need the Enigma Machine to decipher the Freudian overtones of this short.  It was also filmed in extreme close-up for some odd reason; my memory may be a little rusty but I seem to recall that Leonard Maltin and Richard Bann speculated in their invaluable reference book Our Gang: The Life and Times of the Little Rascals it was either a technical error (the wrong camera lens was used) or was done on purpose for parody’s sake (I’m convinced it was the latter).  Interestingly on this DVD, you can watch the short in its original presentation or see it as it was shown on German television (the screen cap at the beginning of this essay is from the animated introduction of the show)… 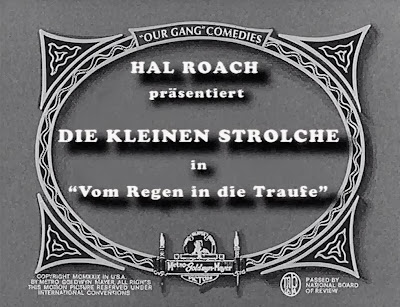 …which is accompanied by a bit of narration and voices representing the kids (all in German, of course). 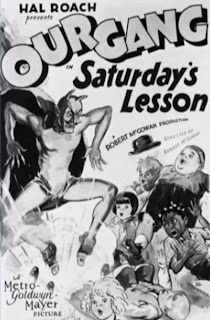 I found myself amused by the last short on the collection, Saturday’s Lesson (1929)—which was the final Our Gang silent comedy (though it was released in between two of their newer sound shorts, Bouncing Babies and Moan & Groan, Inc.).  The kids are grumbling because it’s Saturday and their mothers have loaded them up with chores (Farina has rugs to beat, Joe wood to chop, etc.), with the moms warning them that lazy kids will soon answer to “the old devil man.”  Fortuitously, a man (John B. O’Brian) dressed as Beelzebub himself (he’s carrying a sandwich board touting Mephisto heaters) overhears the kids and decides to pose as Satan with the help of a few smoke pellets.  Scared sh*tless at being confronted by Mephistopheles, the kids race home and begin Project Chores in earnest, thanks to some speeded-up action via the cameraman.  This is the highlight of the two-reeler; Joe, in particular, is so rattled that he chops wood with the fury of a kid possessed, and when his mom (Orpha Alba) is convinced there’s something wrong with him she orders him to bed…prompting him to leap out when she’s not looking and haul ass and elbows back to the woodpile.  (She insists on giving him a dose of castor oil and when he complains, Devil Guy appears at his window…prompting Joe to grab the bottle and chug down its contents.)  Okay, it’s way too heavy on the moralizing (at the end, the Gang addresses the audience to tell the youngsters to mind their mothers…oh, and stay in school, kids!) which wouldn’t become prevalent until MGM got hold of the series…but the gags involving the kids’ new work ethic are pretty hooty.

There are also good moments in another silent comedy released at the time when Our Gang was transitioning to sound—Cat, Dog & Co (1929), in which yet another lesson is handed down to the kids that they should be kind to animals.  This is the woman who imparts that lesson, by the way: 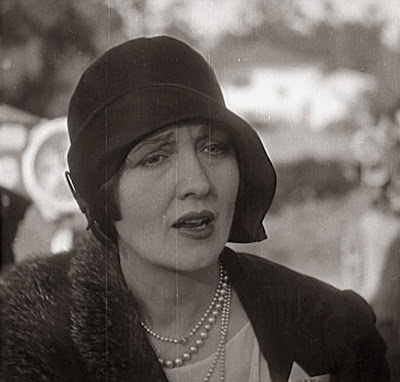 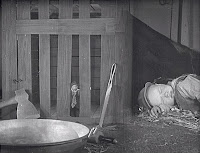 You might recognize her as Hedda Hopper, and it is a shame that she did not practice this same kindness when she embarked on her later career as one of the truly monstrous people of Hollywood.  There’s a running gag in Cat that finds Joe bothered by a pesky flea; he keeps picking him off his person and depositing him on the ground (because kindness to animals) and the flea (animated) keeps hopping back on Joe for a ride.  The highlight of the short is an entertaining sequence where Wheezer dreams that he’s been put on trial, charged with cruelty to animals (the special effects in this one are a lot of fun) who have become his judge and jury. 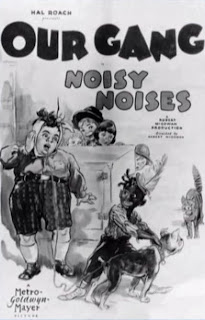 As for the rest of the material…the entries range from amusing (Noisy Noises) to just plain time-passers (Crazy House).  The Spanking Age (1928) utilizes an interesting storytelling technique in that none of the adults are seen from the waist up—it’s not unlike a Tom and Jerry cartoon.  Oliver Hardy has a cameo in Barnum & Ringling, Inc. (1928) as does Eugene Pallette (Babe is a tipsy guest, Pallette a hotel dick).  The nadir of this set is Spook Spoofing (1928), in which the audience learns not only are scared kids uproariously funny but African-American kids being frightened generates twice as many laughs.  The Our Gang shorts have their defenders and detractors; the latter group pointing out that there’s a lot of uncomfortable racial insensitivity in some of the comedies.  Spook Spoofing is enough to give the franchise a bad name (the gang takes sadistic delight in playing practical jokes on Farina, portrayed as a kid who carries a lucky “mumbo-jumbo” charm to ward off evil); it’s presented on the set in its two-reel form although it apparently was released originally as a three-reeler…but believe me, two reels of this nonsense is plenty.

The Our Gang set also features some promos for DVDs also offered by Kinowelt…one of which is several collections of Get Smart released under its German title, Mini-Max.  I kind of giggled at this because there’s footage from the episode “The Groovy Guru” and it’s funny watching Larry Storch being dubbed by a German actor.
Posted by Ivan G Shreve Jr at 8:00 AM