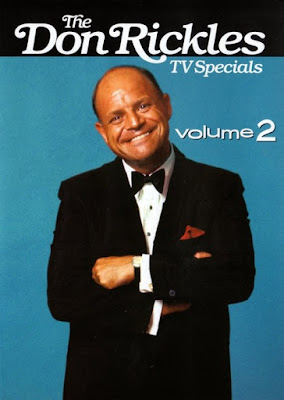 Well, it was a long time getting here—the screener was sent to my and Los Parentes Yesteryear’s old Athens address—but I found myself the recipient of a copy of the Time Life box set Mr. Warmth! Don Rickles: The Ultimate TV Collection, courtesy of Michael Krause at Foundry Communications.  This compendium—released on October 20th—contains the entire series run of CPO Sharkey (Seasons 1 and 2), and two collections of The Don Rickles TV Specials (Volumes 1 and 2).  Since I already had copies of three of these titles, I packed them up and sent them to members of the Thrilling Days of Yesteryear faithful who are wild about Rickles.  But I hung onto The Don Rickles TV Specials, Volume 2 in order to give it a proper review. 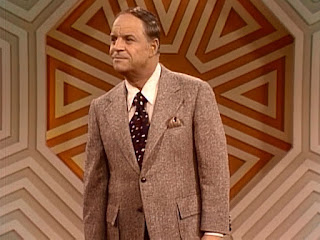 Like Volume 1, Volume 2 contains two specials originally telecast over CBS-TV back in the 1970s.  The odd thing is—the first, Mr. Warmth (01/18/75), doesn’t even rate a mention at the IMDb; I’m starting to have serious doubts about that reference site’s reliability, he said in a voice laced with sarcasm.  (It shouldn’t be mistaken for the 2007 HBO presentation Mr. Warmth: The Don Rickles Project, by the way.)  A few people have suggested that Warmth might have possibly been a pilot for a variety hour featuring the Merchant of Venom…and I have to say, I would have been on board with that if they would have allowed Rickles to just insult the audience for fifty minutes and then called it a wrap.

That’s the strongest part of Warmth: letting Rickles be Rickles.  The sketches really aren’t much to write home about; there’s a parody of lame sitcoms that features this guy: 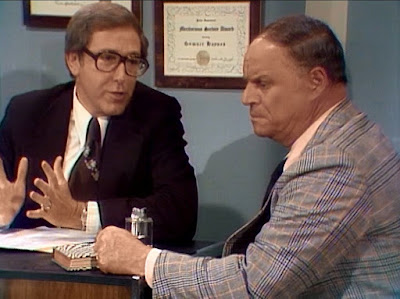 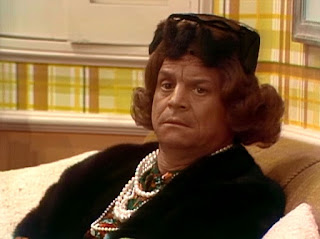 That’s Ken Sansom as a psychiatrist—I mention Sansom only because there may be one or two of you who’ll remember Ken’s brief appearances as “Clarence Demarest” in a pair of Mayberry R.F.D. episodes (“Millie, the Best-Dressed Woman,” “Goober the Elder”)—who gives Don much-needed advice when our hero learns at his father’s funeral that his brother (Jim Connell) puts on women’s clothing and hangs around in bars, as the song goes.  Popular 50s vocalist and later Gong Show exhibitionist Jaye P. Morgan plays Don’s wife; she’s peculiarly introduced in the opening credits as simply “Morgan,” and I don’t know if she was going for some sort of “Garbo” thing or announcer George Fenneman’s mike got cut off at the “Jaye P.”

The best of the sketches—you can probably understand the appeal, me being an old-time radio fan and all—features Jack Klugman, Bob Newhart and Loretta Swit reading straight lines from a radio script and when it comes to Don’s part, he ad-libs something wacky and/or insulting…the gimmick is that Jack, Bob and Loretta must continue reading their straight script lines.  The oddest of the show’s sketches is set in an airport lounge, where Don plays a customer relations representative dealing with some really odd passengers…who include: 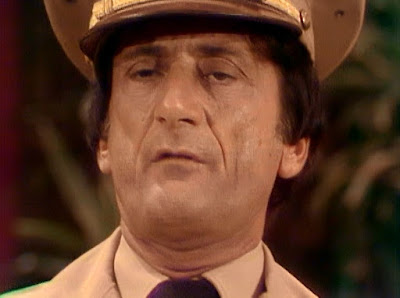 Charlie Callas…and I never thought I write this, but I didn’t laugh once at him… 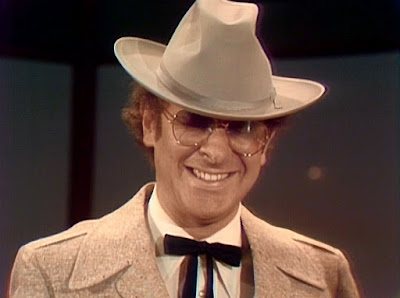 Andrew “Grover” Leal fave Steve Landesberg—who laughed more than I did, though it was mostly at himself (very Carol Burnett Show of you, sir)… 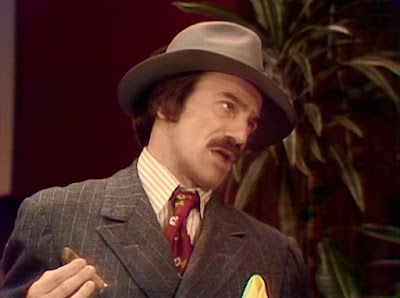 …and Bill Saluga, the man who inspired the age-old unanswerable query: “Why did anyone ever think this guy was funny?”


Don welcomes some big names to his special: he does a segment with John Wayne, who is supposed to be getting pointers in stand-up comedy from the host but utilizes the time to promote Brannigan (1975) instead.  And getting back to the old-time radio thing: there are some wonderful surviving broadcasts that demonstrate how hilarious Frank Sinatra could be at times.  By this point in the 1970s, however, The Chairman of the Bored was phoning it in. 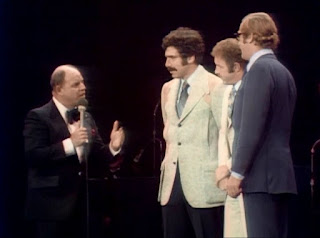 Because the second special, Rickles (11/19/75), features a good portion of Don on location at Caesar’s Palace in Las Vegas, I’d say it’s the stronger of the two telecasts on the set.  Don does a musical number at the beginning—his signature tune I’m a Nice Guy—and is joined on stage by other “nice guys”: Jack Palance, Bobby Riggs, Otto Preminger, Larry Linville & Loretta Swit (as their M*A*S*H characters, Majors Burns and Houlihan) and Bruce the Shark from Jaws.  (You have to see this to believe it, folks.)  A later portion of the show has Don welcoming Elliott Gould, James Caan and Michael Caine (all promoting Harry and Walter Go to New York) and an identified audience member for a funny bit of improv.  (Don also gives the legendary Joe Louis a shout-out; the Brown Bomber is sitting in the audience, enjoying the show.) 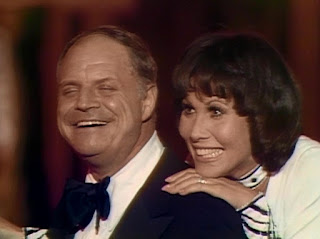 There are also some genuine “What the…front yard?” moments in Rickles: for reasons unexplained, Don and guest Jack Klugman perform the Matthew Harrison Brady-Henry Drummond roles from Inherit the Wind.  It shows that Don wasn’t too shabby when it came to demonstrating his acting chops…but it also brings the proceedings to a screeching halt.  Rickles is pure Las Vegas cheesiness; Michele Lee and Don do a showy production number (along with the Argentinian Gauchos and the Royal Scots Guards) that Rickles describes in an intro to the special thusly: “She was a great lady…we marched downtown, singing, dancing…wow…and having the best time of our life…trying to get a drink someplace.  As soon as we got a drink, the parade ended.” 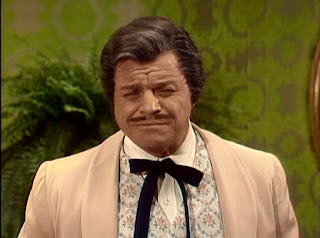 Though the Mr. Warmth/Rickles sketches aren’t quite as well-written as those in the previous shows contained in The Don Rickles TV Specials, Volume 1, Volume 2 is choc-a-bloc with those wonderful moments that show biz aficionados eat with a spoon: the bonus features include elongated versions of some of the segments from Mr. Warmth, and a sincere tribute from Don to Jimmy Cagney (his Cagney’s not bad—I’ve seen worse), which allows him to belt out Yankee Doodle Dandy.  If you’re lying awake at night wondering: “I wonder if there’s a TV special that lets Don Rickles sing with Helen ‘I Am Woman’ Reddy?” then you will definitely want to put The Don Rickles TV Specials, Volume 2 in your shopping cart.
Posted by Ivan G Shreve Jr at 7:00 AM

Shut it, Rip. It's none of your business.

P.S. Steve Landesberg is also one of my faves!

That last pic of Don had me doing a double take. Could've been mistaken for Ross Martin, for all we know.

The Rickles collection is also available through Movies Unlimited, though I can't quote their price right now (I'm at work, and the tiny catalogue they sent is on my kitchen table).

That last pic of Don had me doing a double take. Could've been mistaken for Ross Martin, for all we know.

That's Don channeling Clark-Gable-as-Rhett-Butler in a funny sketch that you can see the punchline from a mile away. I'm impressed with his mimicry, though.