“This is the story of a plaid overnight bag…”

So begins the opening shot of What’s Up, Doc?, a 1972 screwball comedy starring Barbra Streisand and Ryan O’Neal. I chose this movie for a number of reasons, which include Randy Quaid, who is featured in a bit part, and Madeline Kahn who made her film debut in this movie.

Actually, it’s the story of four identical plaid overnight bags, and how they somehow miraculously end up in separate rooms on the same hallway of the same hotel in . The first bag, in the possession of a reporter, Mr. Smith (Michael Murphy), contains top-secret government. Smith is being followed by a government agent Mr. Jones (Philip Roth).

Bag #2 is owned by Mrs. Van Hoskins (Mabel Albertson), stuffed with jewels (the bag, not Mrs. Van Hoskins). It is being cased (no pun intended) by desk clerk Fritz (Stefan Gierasch and Harry, the house detective (Sorrel Brooke).

Bag #3 is in the possession of Howard Bannister (O’Neal), a mild-mannered musicologist from , visiting for the Congress of American Musicologists convention. He is competing for the Larrabee Grant with his research on primitive music of igneous rocks. With him is his domineering fiancé Eunice Burns.

Eunice is played by Madeline Khan in her screen debut, as she introduces the shrewish demanding wife/fiancé/girlfriend she would portray in so many other movies.

In the hotel lobby, Howard runs into Bag #4, Judy Maxwell (no pun intended) played by Streisand, a brilliant but directionless young woman. Smitten with the nerdy scholar at first sight, she makes it a point to insinuate herself into Howard’s big weekend, first crashing his hotel room and later the awards dinner posing as his fiancé.

She deflates Howard’s pompous rival, High Simon (Kenneth Mars) and charms Frederick Larrabee (Austin Pendleton), who tells Howard that thanks to his fiancé, the $20,000 award is practically in the bag (no pun intended). However, love goes out the door when money comes innuendo, and in fear of blowing the $20k award, Howard denies Eunice upon her arrival at the convention dinner.

Of course, this is the first fragment of many as the mortar of Howard and Eunice’s relationship begins to crumble. Judy certainly doesn’t help when she is discovered taking a bubble bath in Howard’s room. In an effort to hide her from Eunice, Howard sends her out onto the ledge wearing only a towel, but as Howard’s efforts to keep Judy under wraps (no pun intended) only results in more chaos.

As the night progresses, it becomes a game of four-bag monty, as bag #1 is stashed in Mrs. Van Hoskin’s room, whose bag (bag #2) is stolen by the house detective and hidden under Howard’s bed, amazingly right next to Judy’s bag (bag #4). With all the bags being shuffled around from one room to another, inevitably everyone ends up with the wrong bag.

The next morning, Howard wakes up in what’s left of his hotel room, and the manager (John Hillerman) asks that he leave. On his way out, he runs into Judy, who informs him that he’s been invited to Larrabee’s home for brunch. Meanwhile, Judy overhears Harry and Fritz discussing their plans for their jewel heist, and the address as to where the exchange is to take place. She takes the opportunity to send Eunice to that location so she can accompany Howard to brunch.

Of course, the would-be thieves’ partners are none to happy to discover they’ve been handed a bag full of seemingly ordinary stones, and even less so when Eunice arrives demanding the return of Howard’s igneous rocks. Under duress, she reveals the location of Larrabee’s brunch and the other bags.

Following a free-for-all, Judy and Howard take it on the lam with all four bags. Chased through the city streets, all the major players end up in . Fished from the sea, they appear before Judge Maxwell (Liam Dunn), where Howard tries to explain what happened in his usual clumsy fashion.

It is here that the revelation that Judy is the judge’s daughter saves the day. A quick screen wipe and we’re back at the airport where everything started. Howard has his igneous rocks back, Mrs. Van Hoksins has her jewels back and is willing to split the reward for their return evenly between Howard and Judy. However, with all the property damage that has been incurred, it leaves a total of only $25 each.

The damage is done to Howard’s betrothal, and Eunice has taken up with Larrabee, who arrives with Simon, the designee of the $20,000 grant. But because Judy is brilliant, she recognizes he’s cribbed the research from a 60-year-old paper never translated into English. Howard wins. 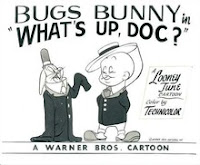 It is on the plane back to that Howard discovers Judy in the row behind him, and as the classic 1950 Looney Tunes cartoon What’s Up, Doc? plays in the background, the two of them share a sweet reunion, complete with a not so subtle reference to another of Ryan O’Neal’s better known movies.

The film was directed by Peter Bogdanovich from a script by Buck Henry, David Newman and Robert Benton. It is a pleasantly enjoyable update of the classic screwball comedies of the 1930s and ‘40s, even going so far as to sub-reference Bringing Up Baby (1938).

I’m no fan of Streisand, but I found her con artistry ways charming in so many ways, sort of a blend between Bugs Bunny and Rufus T. Firefly. I might’ve enjoyed more roles like this from her.

O’Neal is only passably believable as the nerdy professor; too good looking to be that socially awkward. A less handsome actor might’ve worked better, but O’Neal was a hot property at the time.  (Ivan’s note: O’Neal was also chosen because of his strong resemblance to director Bogdanovich.)  And to no great surprise, Madeline Kahn was in high demand soon after, appearing in high Madeline mode in such films as Paper Moon (1973), Blazing Saddles (1974) and Young Frankenstein (1974).

Saw this in the theater all those years ago and enjoyed it hugely. Also liked Streisand in THE OWL AND THE PUSSYCAT.

I'm not a big Ryan O'Neal fan, but I enjoyed his performance in this. I don't buy the "too good looking to be that socially awkward" arguement. You could say the same thing about Cary Grant in BRINGING UP BABY. I think O'Neil does a fine job. It's a fun film with a great cast and a great car chase. Plus Madeline Kahn's "Howard! Howard Bannister!" line still echos in my soggy mind from time to time.

This worked well enough that several years later Streisand and O'Neal were paired up for another movie, "The Main Event" which was nowhere near as good or as palatable as "What's Up Doc?" Which shows that the reason why the earlier movie worked wasn't because of the chemistry between the stars but because of the writing. And since "What's Up Doc?" takes a huge amount from "Bringing Up Baby" it goes to show that if you're going to steal, steal from the best.

I'm not a huge Streisand fan, particularly in her later films where she was also directing. I frequently find her pretentious and hard to watch. However in looking at her films, there is a period in the early '70s when I not only find her tolerable as an actress but also more than a little bit sexy. It's there in "The Owl and The Pussycat" and I think it's gone forever by the time she did "A Star Is Born." In "What's Up Doc?" she has it in spades.

I remember this film mainly as the first time I ever saw John Hillerman in anything.
I understand Hillerman was in a few films before this, but that hotel manager set the tone for his entire subsequent career (he had no name, but might just as well have been Simon Brimmer or Jonathan Q. Higgins).
Also remembering Mabel Albertson's hilariously age-inappropriate wardrobe, miles away from her usual stuffy-mom wear on so many sitcoms.
Most of all, Ryan O'Neal's deer-in-the-headlights portrayal, which I later came to understand was in fact the real O'Neal.

Irrelevant anecdote:
I remember seeing O'Neal on a talk-show special hosted by Burt Reynolds, one of a short-lived series he did for NBC for use in the SNL timeslot.
This particular show was done in London, with several British actors (Michael Caine wasone, can't recall the others), in adition to O'Neal.
The group spent much time recalling various bad reviews the'de recieveed over the years, and at the end Reynolds announced that he'd booked a "well-respected critic" to respond.
This turned out to be Sir Stanley Unwin, Britain's great doubletalk comedian, who was seated on stage next to O'Neal - the only one on the panel who didn't know who he really was.
I'll never forget Sir Stanley, a kindly-looking old gentleman, warbling on in "Unwinese", then turning to an increasingly terrified O'Neal and asking "Don't you think so?" or some such.
I don't know if O'Neal ever forgave Reynolds for this.

Well, you kind of missed the point - the film is an hommage to 1930's screwball comedies, not Bugs Bunny - the mentions of Bringing Up Baby are apt here. And it's rather tiresome to read a "review" that is 90% rehash of the plot, followed by an uninformed opinion. I think we can do better than this.