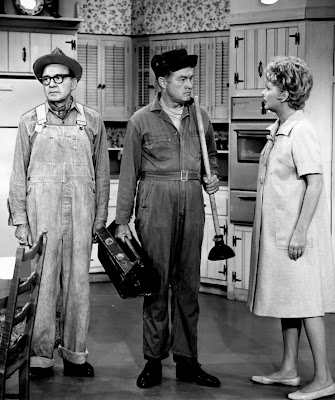 While in the process of writing over at the Radio Spirits blog a special valentine to the funniest man who ever walked this planet, I came across this great picture on the Internets…and while I wouldn’t be completely comfortable placing my hand on a stack of bibles, I’m pretty sure this classic Lucy Show outing from September 28, 1964 (“Lucy and the Plumber”) was my introduction to Jack Benny.  I didn’t see the episode first-run, of course (I would’ve only been a year old and I didn’t become a prodigy until I was three); I caught it in reruns because growing up, The Lucy Show was in perpetual reruns on WCHS-TV, Channel 8 in Charleston, WV and practically everywhere else.  (I’m serious about this.  If you turned the toaster to a higher setting you’d probably pick it up on that.)

I remember asking my mother who the gentleman was and she told me (I’m surprised she knew), and I guess the name just lodged itself in my childhood cranium, only to be brought up later in the 1970s when the nostalgia boom was in high gear and you could hear Benny’s classic radio broadcasts on clear channel stations if you had the manual dexterity of a safecracker (I could catch him early Sunday evenings on St. Louis’ KMOX-AM).  The episode—in case there’s someone out there who hasn’t seen it—also features Willard Waterman and another big-name comedian as Benny’s assistant.  (I wasn’t planning on giving it away...but the picture above does, so...)

Valentine’s Day means many things to many people—candy…flowers…a thoughtful card—but here at Rancho Yesteryear, we honor the holiday knowing that on this date in 1894, Jack Benny was born and gave us the gift of laughter, a present we cherish like no other.  In the meantime, I’m working on some things for the blog, so don’t wander too far out of the yard.  (And look both ways when you’re in the crosswalk.)
Posted by Ivan G Shreve Jr at 8:00 AM

That picture is comedy royalty, no doubt about it.

Happy 39th birthday to Jack Benny! I first encountered him in the comedy specials he did in the early Seventies. It would be a little later than I had the pleasure of seeing his TV show in reruns and still later his radio show. I am still convinced he is the funniest man to ever live!