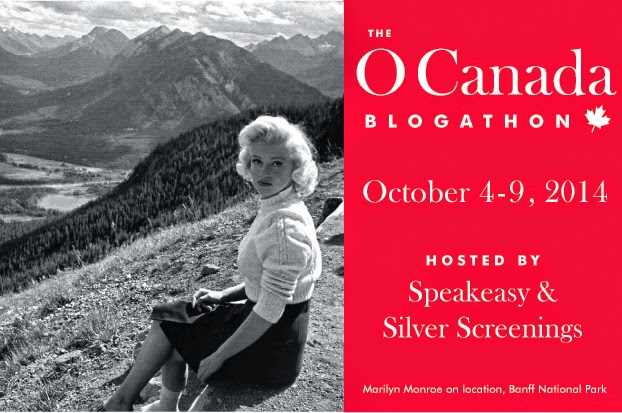 The following essay is Thrilling Days of Yesteryear’s contribution to The O Canada Blogathon, a salute to films whose content centers on our neighbor to the north.  Underway from October 4-9 and hosted by Kristina at Speakeasy and Ruth at Silver Screenings, a list of the participants and the films discussed can be found here, here, here, here, here and here.  (No, I don’t know why they didn’t put together a post with all the info—must be a Canadian thing.)  Warning: because the movie chosen by TDOY is a suspense thriller, I will do my darndest not to spoil it for you—but I make no promise that you can sue me for later in a court of my choice (damn Canadian jurisprudence). 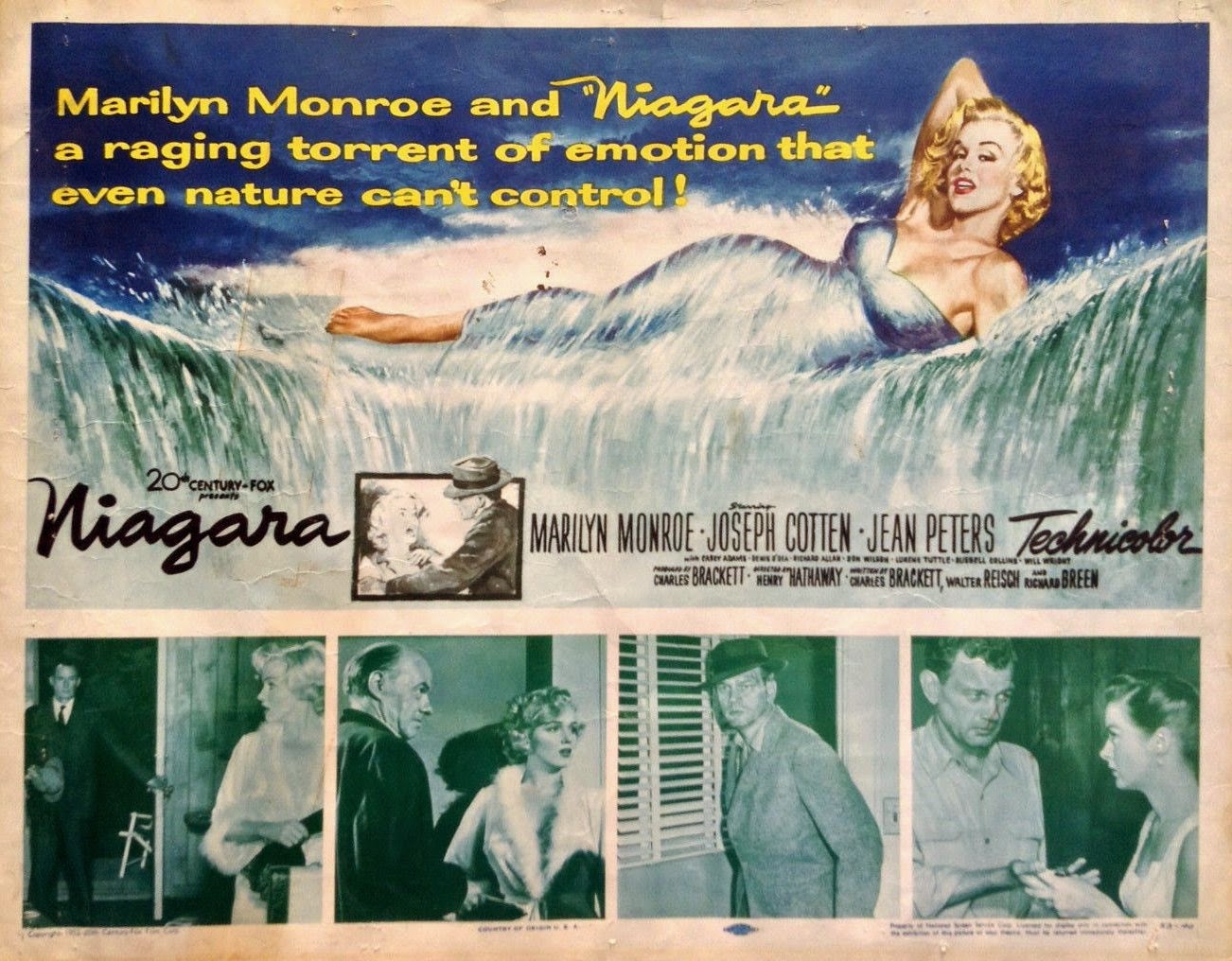 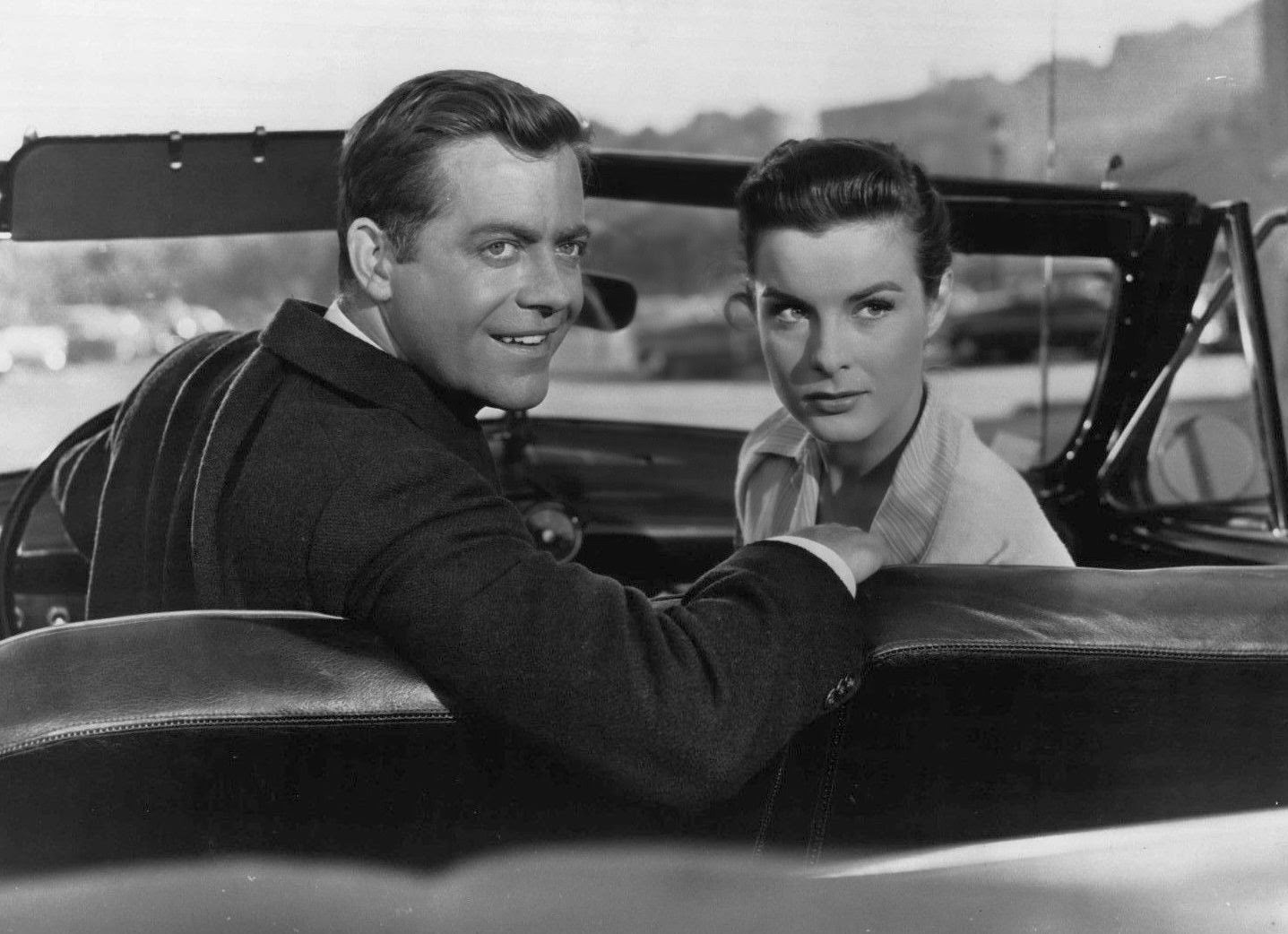 Newlyweds Ray and Polly Cutler (Casey Adams, Jean Peters) have succumbed to the time-honored tradition of spending their honeymoon in Niagara Falls.  Their acquiescence to this custom has actually been three years in the making; though the Cutlers have been married that long (never having a “proper” honeymoon), their trip comes courtesy of a sales competition at the shredded wheat company at which he’s employed.  Ray hopes to meet with one of the company’s veeps, J.C. Kettering (Don Wilson), but learns upon his and Polly’s arrival that J.C. won’t be due for another week. 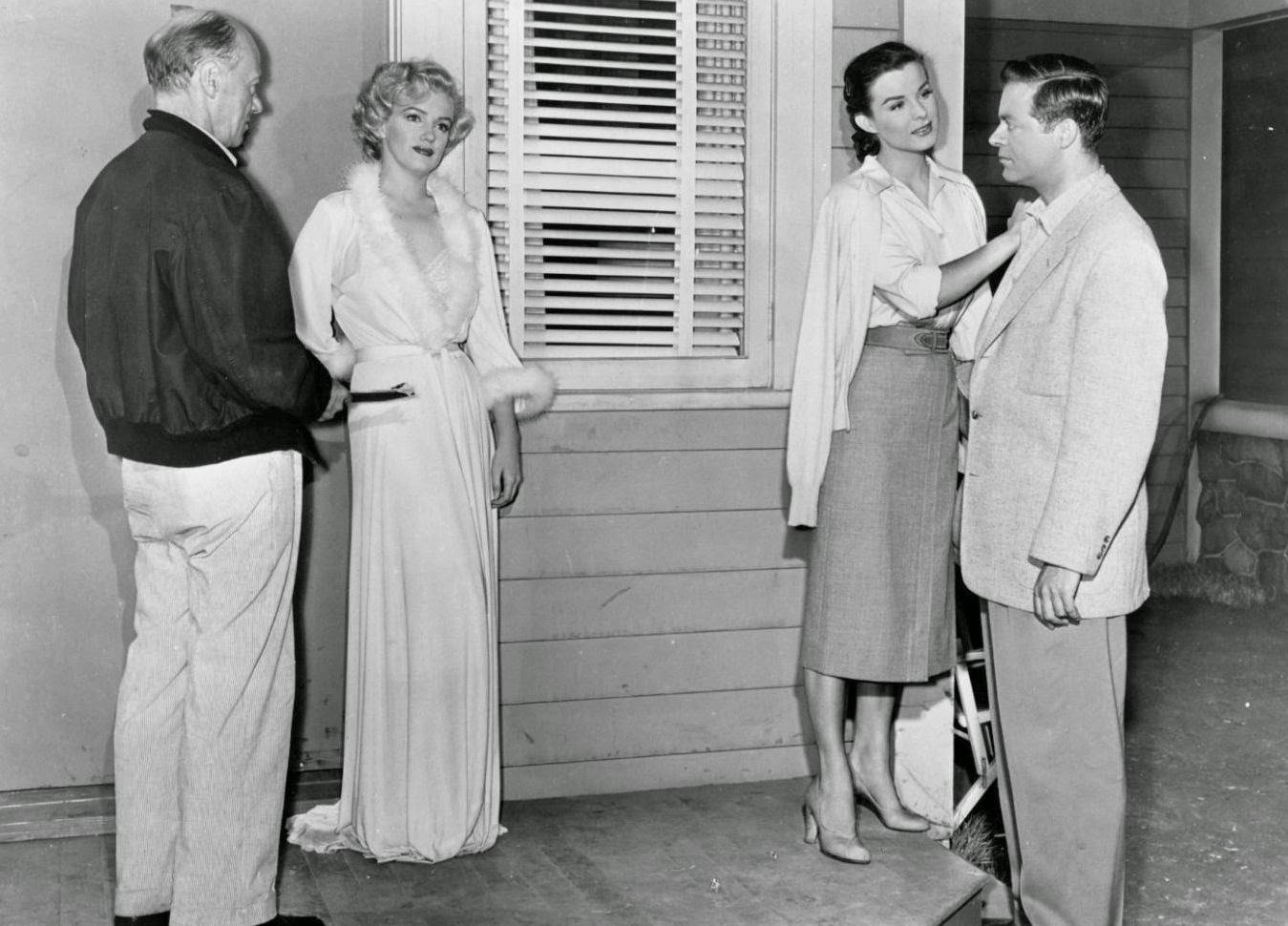 The Cutlers are renting a cabin during their Niagara sojourn, and manager Qua (Russell Collins) has chosen for them lovely accommodations that overlook the falls.  The problem is: the cabin is currently occupied by another couple, George and Rose Loomis (Joseph Cotten, Marilyn Monroe).  Though Qua was told by Rose that they would be vacating soon, Mrs. Loomis asks him for a little leeway because husband George is ill.  Qua and the Cutlers learn from Rose that George is a Korean War veteran who spent a little time in a military psychiatric hospital, and the Cutlers agree that there shouldn’t be any further fuss made about displacing the Loomises; they’ll settle for another cabin. 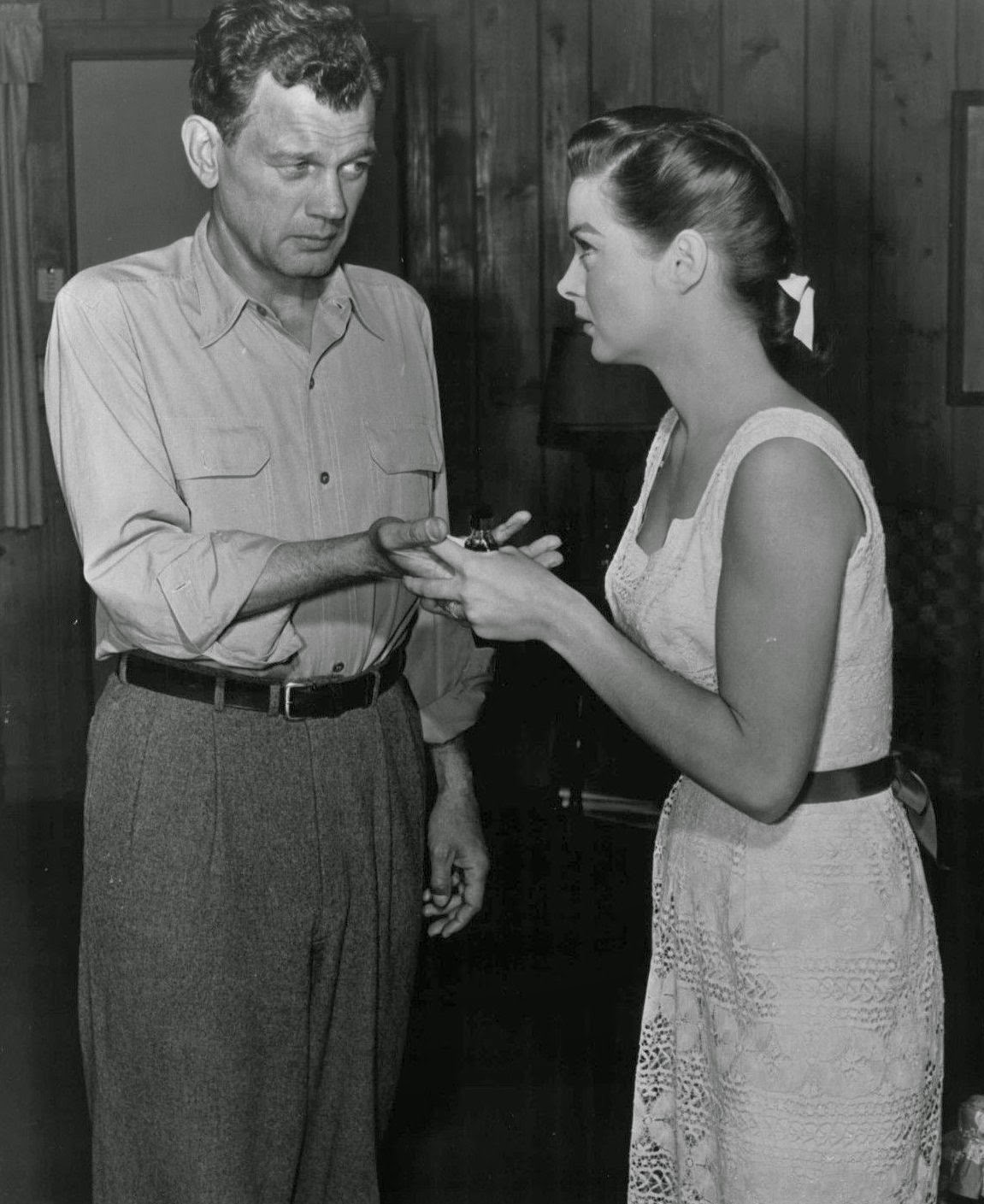 Taking in such touristy Niagara sites as the Maid of the Mist and the scenic tunnel at Horseshoe Falls, Ray and Polly are at the latter when Polly, having her photo taken by her husband, spots Rose in an impassionate embrace with her lover, Ted Patrick (Richard Allan).  The Cutlers gradually learn that marriage isn’t particularly a bed of Rose’s (apologies for the pun) as far as George is concerned; he reveals to Polly after an ugly incident during a party with other cabin members that he suspects his wife is having an affair.  Technically, that’s the least of his worries: Rose and her lover are planning to murder him—but as poet Robert Frost famously observed: “The best-laid schemes o' mice an' men/Gang aft agley…”

Much was made of Marilyn Monroe’s decision in March of 1955 to study with Lee Strasberg at the Actors Studio, a collaboration that would later lead to many critical plaudits for the actress’ work the following year in the movie Bus Stop.  But in my opinion, Marilyn had already demonstrated she had formidable thespic chops much earlier in her career, and the 1953 suspense thriller Niagara is ample proof of this.  With the possible exception of Some Like it Hot (1959), a genuine comedy classic, Niagara is my favorite Monroe film…and I’ll even go as far to say that she certainly gives a better performance in Niagara that Hot (she often seems like she’s phoning it in in the Billy Wilder-directed farce, and she pretty much was). 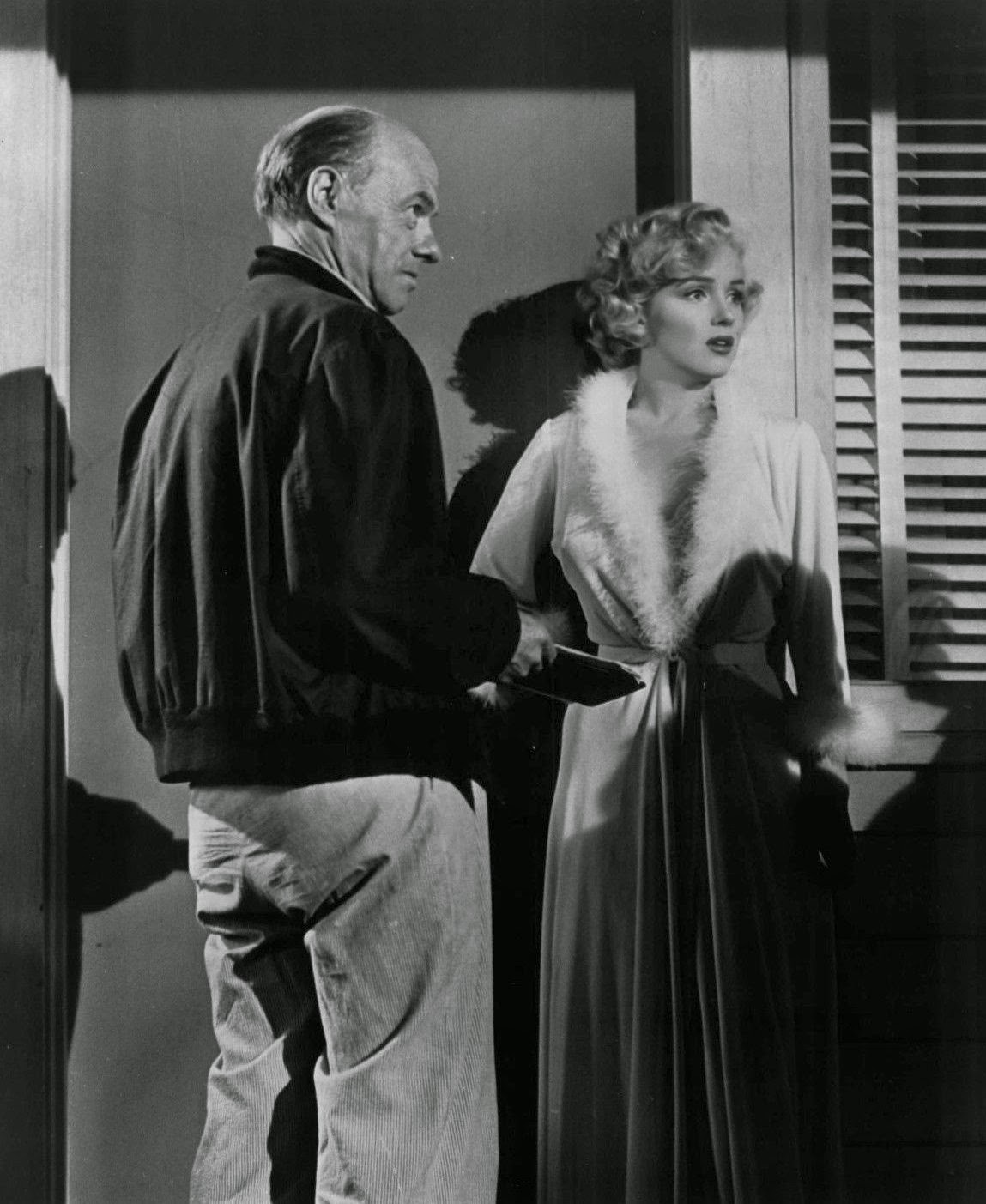 The role of Rose Loomis was re-written and enlarged to accommodate Marilyn after Anne Baxter, who was originally cast as Polly Cutler, bowed out (maybe Baxter learned something from All About Eve?).  It’s a marvelous showcase for MM, a splendid concoction of her seductive appeal and dramatic talent in what would be her first Technicolor outing.  In the beginning, Rose Loomis is presented as an unfaithful conniver (she’s bored with husband George, who explains to Polly Rose is the reason he lost his prosperous farm) but as events unfold she’s transformed into a sympathetic victim.   Marilyn does such an amazing job that at the time of the movie’s release, she attracted the ire of a number of women’s groups for her “frank characterization,” according to Variety and L.A. Mirror.  (Despite her star status, Monroe was still being paid as a 20th Century-Fox “stock player,” and so she actually earned less than make-up man Allan Snyder.) 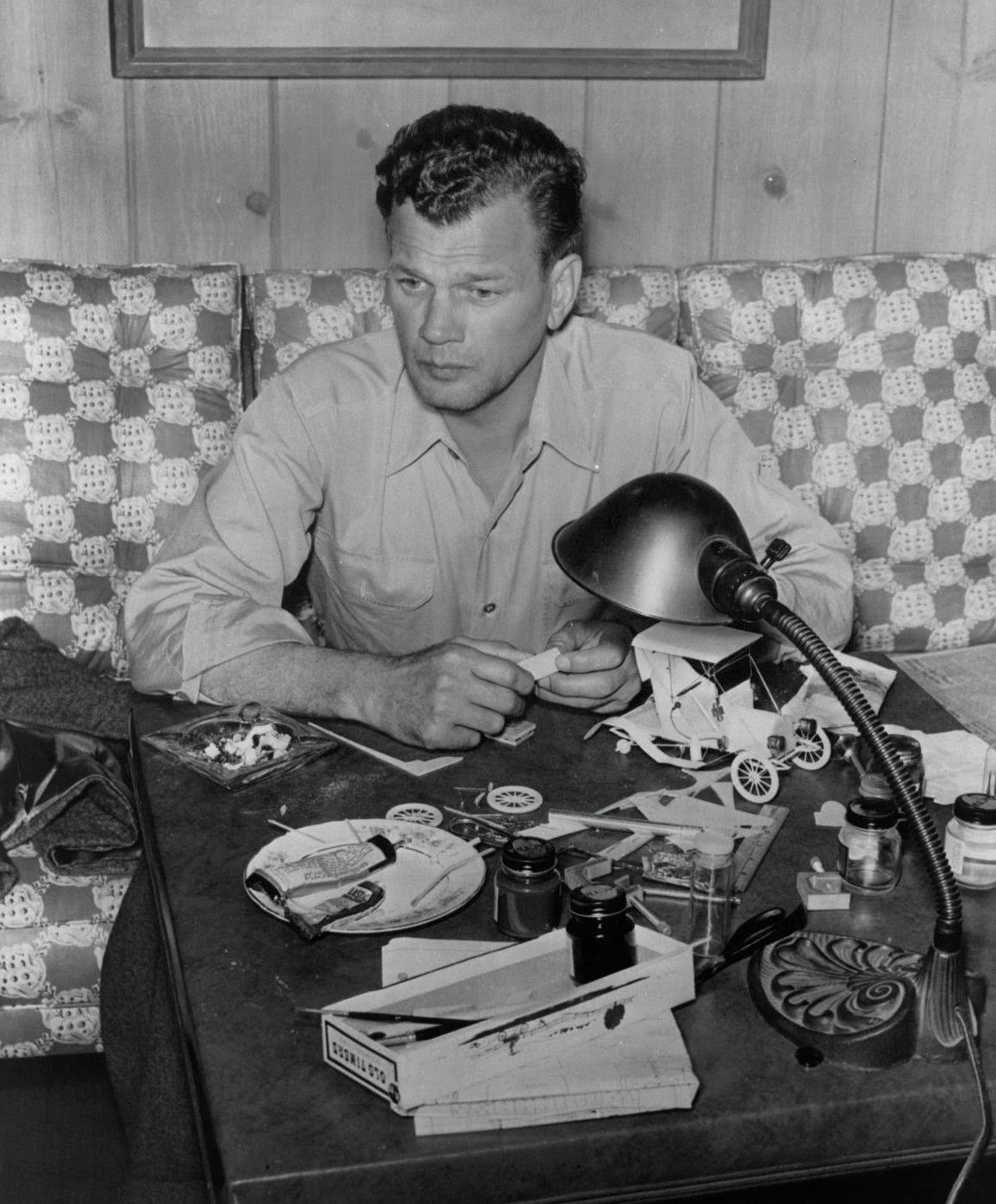 James Mason had originally been assigned to play George Loomis, yet Joseph Cotten’s performance as the battle fatigued war veteran is one of his very best; Cotten’s vulnerability masks a cold, calculating manner that harkens back to one of his best remembered screen showcases, that of “Uncle” Charlie Oakley in Shadow of a Doubt (1943).  In fact, I’m often amazed at how Hitchcockian Niagara is (I was surprised when no one snagged it in The Best Hitchcock Films…That Hitchcock Never Made Blogathon back in 2012); director Henry Hathaway apes The Master of Suspense by creating palpable tension throughout (as well as placing proper emphasis on the twists and turns in the script courtesy of Charles Brockett, Walter Reisch & Jack Webb collaborator Richard Breen).  One scene in particular, in which Polly is menaced by George at the Cave of the Winds and is nearly killed when a rail splinters on one of the walkways is right out of Hitch’s playbook.  To give credit where credit is due, however, Hathaway wasn’t exactly a novice when it came to directing thrillers: he had The Dark Corner (1946), Kiss of Death (1947) and Call Northside 777 (1948) on his resume, among many others. 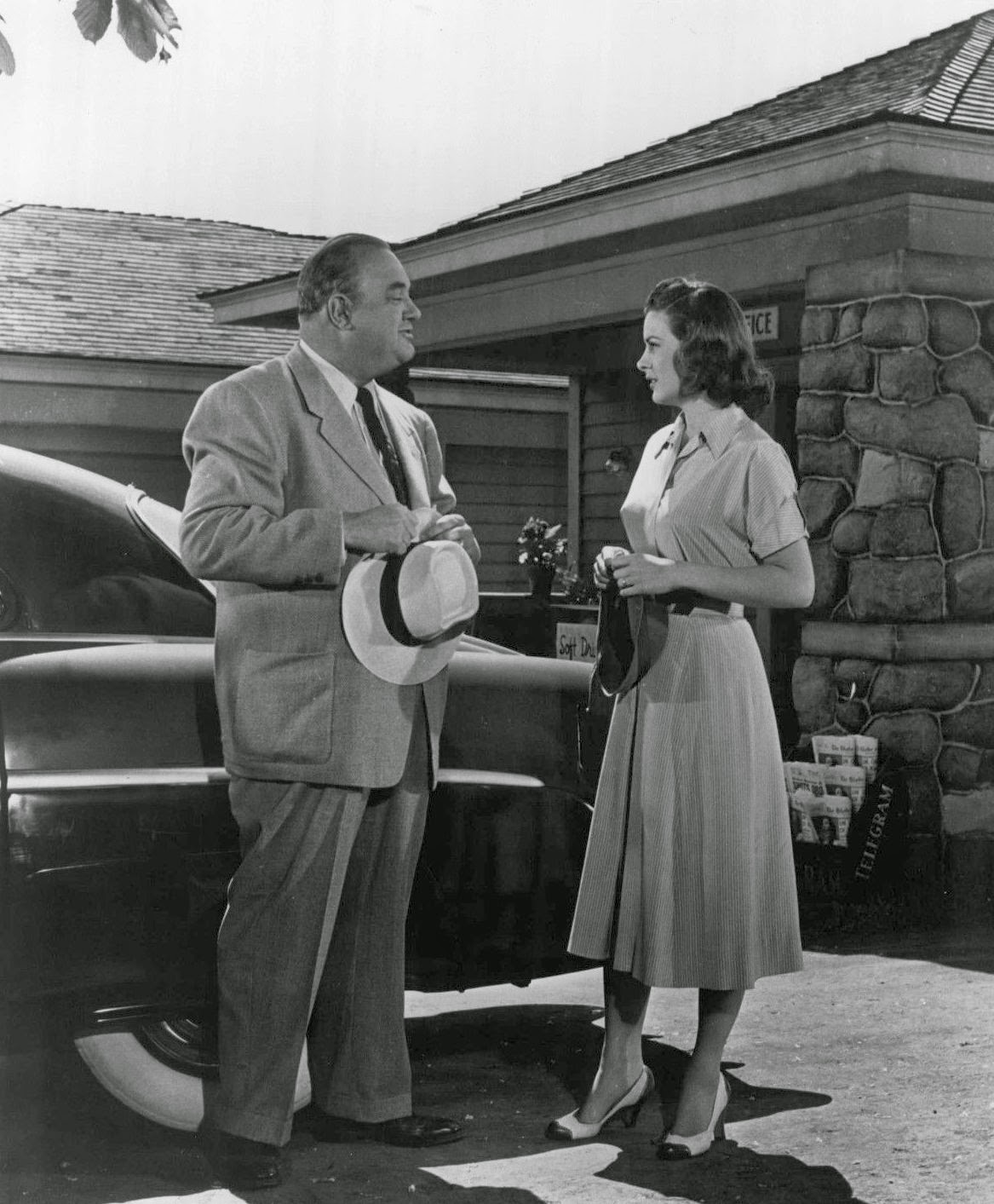 Jean Peters does quite well as the damsel-in-distress; I’ve never been a huge fan of Casey Adams (a.k.a. Max Showalter) but hey, he was already on the Fox payroll and he doesn’t screw things up too badly.  I always forget that Harry Carey, Jr. turns up uncredited as a cab driver, and there are other great character turns from Russell Collins, Denis O’Dea (as the detective investigating Loomis’ death) and Minerva Urecal in addition to familiar TV faces like Henry Beckman and Arch Johnson (his film debut).  The nicest surprise in Niagara is the presence of Don Wilson, best remembered as Jack Benny’s longtime announcer on radio and television.  Donsy was no slouch in movies but most of his roles (like Sailor Beware, for example) either featured him as an announcer or master of ceremonies—so his emoting as J.C. Kettering, Ray’s gregarious boss, is a nice change of pace.  (George’s therapeutic building of a model of a 1907 Maxwell is a little in-joke commenting on Don’s Benny employment.)  Two other OTR veterans also acquit themselves nicely in Niagara: TDOY fave Lurene Tuttle plays Mrs. Kettering, and Will Wright a boat renter who figures heavily in the last section of the film. 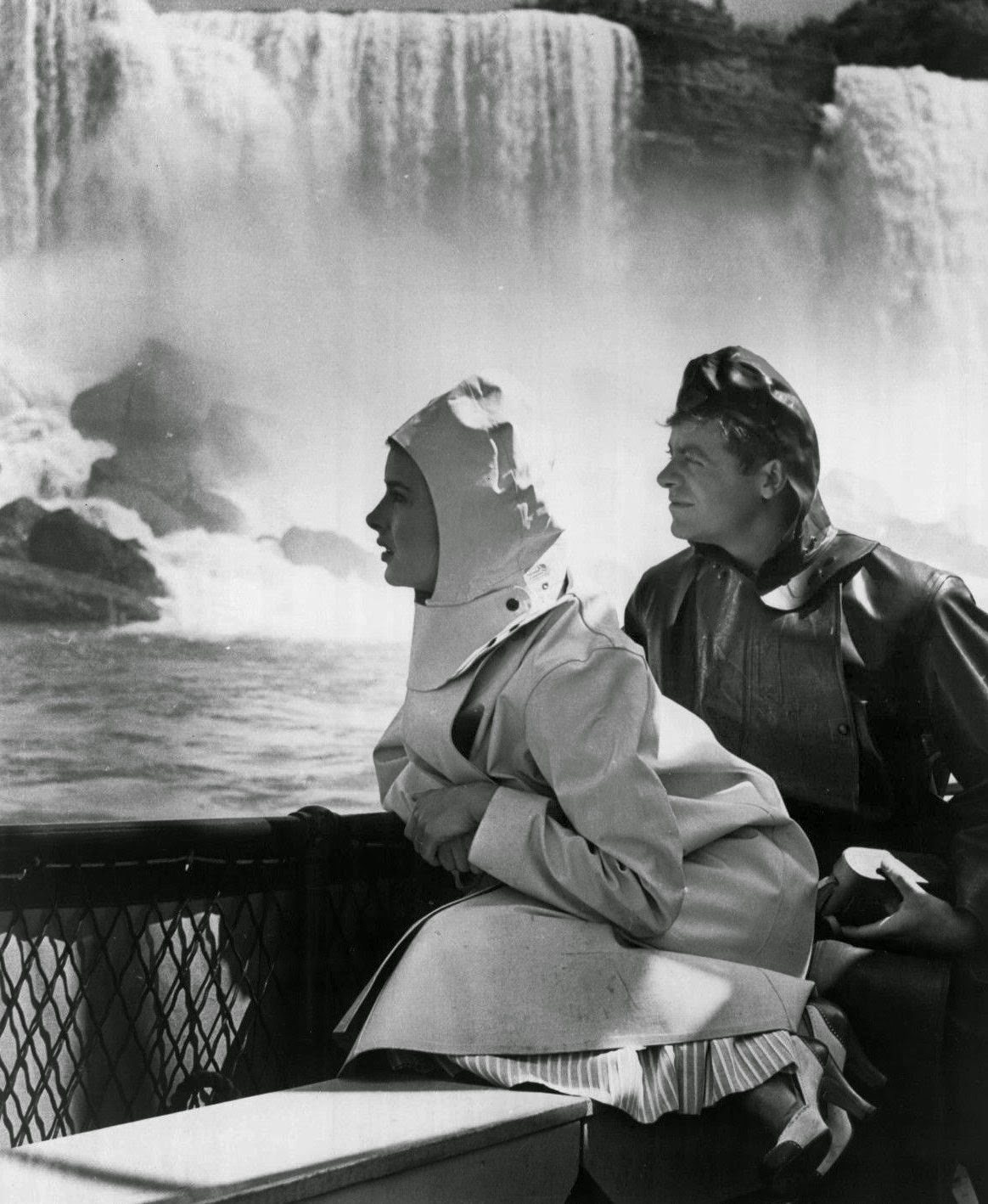 So much for the acting—it’s important to note that in keeping with this blogathon, Niagara Falls itself is a prominent character in this movie; its magnificence offers a silent commentary on the insignificance of humanity while at the same time demonstrating that while it often symbolizes marriage and other happy-ever-afters it doesn’t always work out that way (George and Rose Loomis, for example…and the nameless couple trapped in the bus terminal complaining that they can’t get back to the U.S. side due to the roadblock).  A good deal of Niagara was lensed on a 20th Century-Fox soundstage, that’s a given—but the location shooting in Ontario is positively breathtaking (I think the Technicolor hurts the film’s “noir” reputation a bit) and functions as an effective travelogue.  Not everyone was on board with my last observation: the Niagara Falls representative for the Ontario legislature was quoted in an April 1953 Los Angeles Herald Express edition that the movie “did the honeymoon capital nothing but harm”—giving the popular tourist spot “murder and suicide and seamy lives.”  Well, there’s no pleasing some people.  But Niagara is a crackerjack thriller, and if I haven’t given too much away you should check it out at your convenience.
Posted by Ivan G Shreve Jr at 12:00 AM

(Carson-like) I did not know that! It's good to learn something new everyday.

I agree that MM was excellent here, and that technicolor did make her look fabulous, it was in this movie the stylists perfected her "look." Love that line of Peters: "for a dress like that you have to lay plans when you're 13." Kind of surprising that the actor who played MM's guy here, Richard Allen never got very far did he? Cheers and thanks for being a part of this blogathon.

I love Joseph Cotten in this film, and Marilyn M. too. This film should be more well known than it is, and not just for Marilyn's appearance. It is one terrific film, and the shots of Niagara falls are beautiful.

Thanks for joining the O Canada blogathon!

Great post - I think this is one of Marilyn's strongest roles, and it's always refreshing to see her femme fatale, rather than in a comic/romantic role. I think that pink dress caused the film to be banned in some more conservative US states, such was the concern about its threat to society.

Nice wruite-up! This is the only movie that I think that Marilyn actually acts! I generally avoid her as best I can, but in this one she actually plays a person...not just a cartoonish sex object!

I enjoyed reading your post about this movie, and know after reading it that I would love this movie. Thank you for not giving away the plot. So interesting how you said Niagra Falls itself is a character. I had never thought of scenery in this way.