The British Empire in Film Blogathon: Carry On… Up the Khyber (1968) 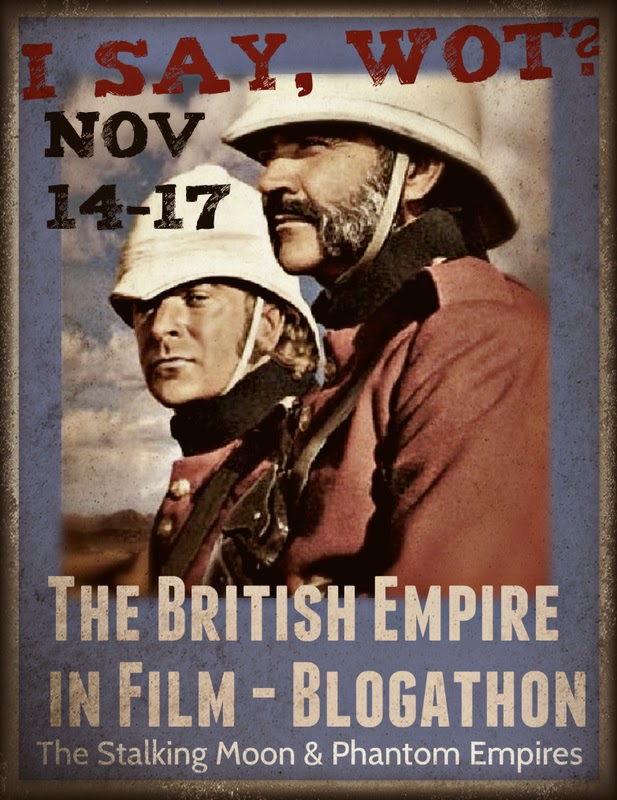 The following essay is Thrilling Days of Yesteryear’s contribution to The British Empire in Film Blogathon, currently underway from November 14-17 and hosted by Clayton at Phantom Empires and Jeff at The Stalking Moon.  For a complete list of participants and the films/topics discussed, click here, here, here and here. 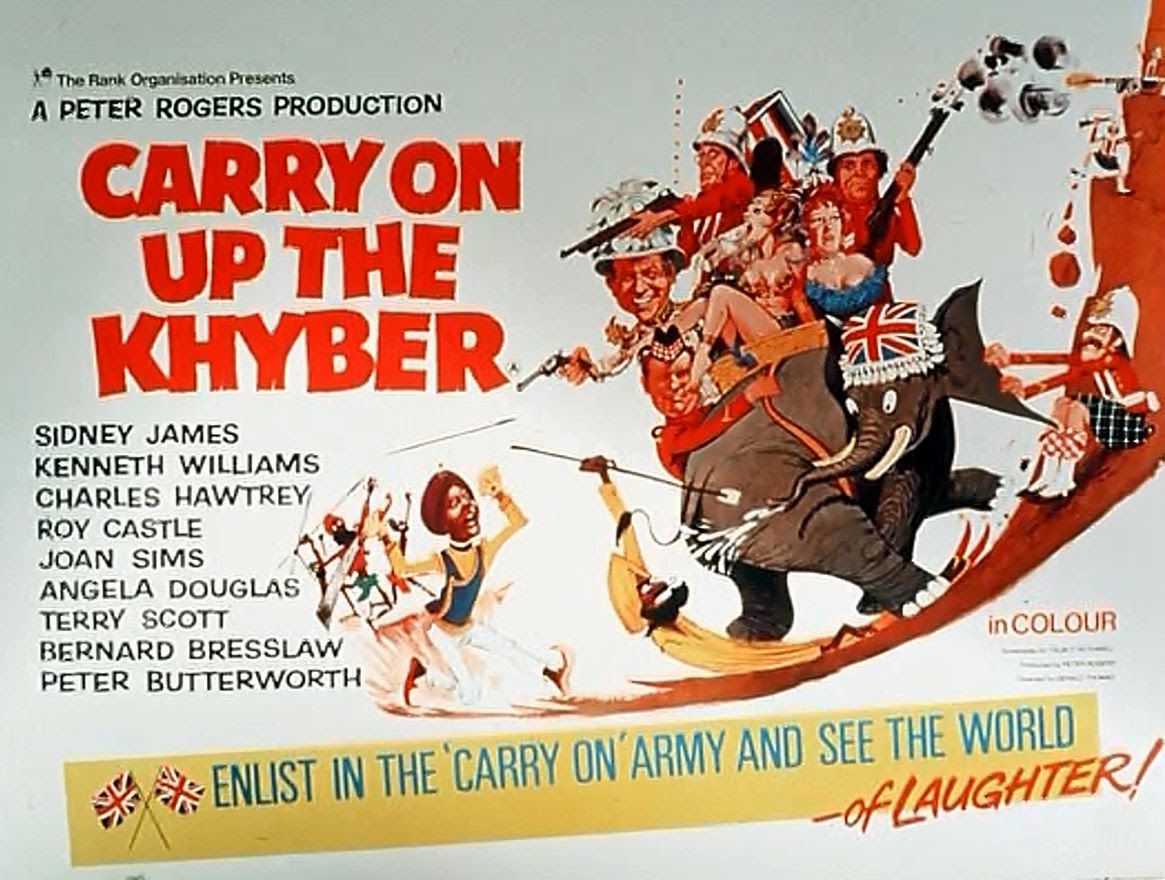 India: 1895.  The Northwest Frontier Province of Kalabar is governed by Her Majesty’s representative, Sir Sidney Ruff-Diamond (Sidney James).  Ruff-Diamond and his wife, Lady Joan (Joan Sims), live a life of luxury and ease matched only by the true rulers of that country—in this case, Randy Lal, The Khasi of Kalabar (Kenneth Williams).  Relations between the two men are cordial, but there is an undeniable element of hostility between them—to make matters worse, Lady Joan has taken a fancy to the Khasi because her husband is a little inattentive in the marital responsibilities department…if you know what I mean, and I think you do. 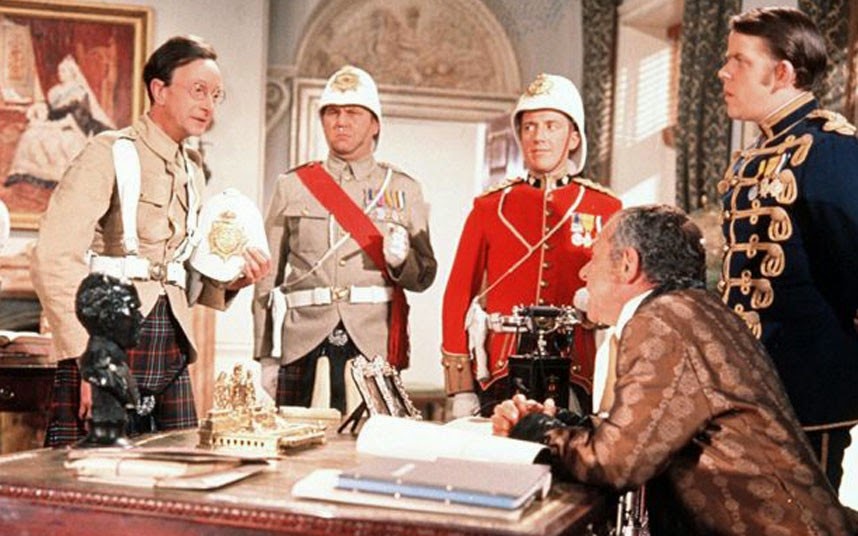 The British governance of Kalabar is threatened, however, when Burpa warlord Bungdit Din (Bernard Bresslaw) discovers a horrible secret as he is attacking the famed Khyber Pass.  The sentry on duty, PFC Jimmy Widdle (Charles Hawtrey) of the 3rd Foot and Mouth Regiment, is found to be wearing underwear underneath his kilt.  The Indian tribes believe that the Regiment, to whom they refer as “The Devils in Skirts,” are invincible in battle because they choose to go commando—so if the news were to get out, anti-British rebellion is almost certain to foment.  Lady Joan doesn’t help the situation any when she snaps a photograph of the Regiment on parade, revealing that all of them wear undergarments underneath. 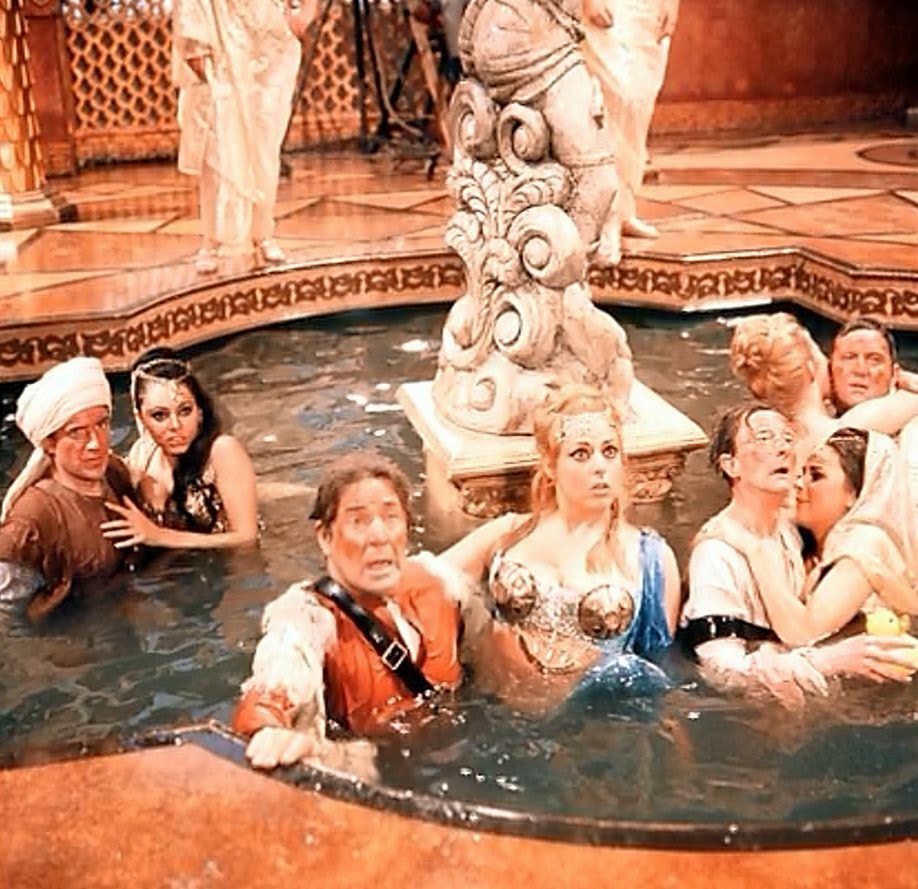 So Widdle, Captain Keene (Roy Castle) and Sergeant Major MacNutt (Terry Scott)—with the reluctant help of missionary Brother Belcher (Peter Buttersworth)—make an attempt to infiltrate the Khasi’s palace and retrieve that photo before the sun sets on the British Empire.  In the meantime, Sir Sidney—clearly devastated that his wife is in the clutches of the Khasi—is comforted by the ruler’s many wives (fifty-one in all)…who must “right the wrong” that has been done to him.  (It’s nice work if you can get it, mate.)

I’m sure after reading the above description—or even glancing at the cast members—that you’ve surmised Carry On… Up the Khyber (1968) is a comedic farce that sends up life in the British Raj.  The “Carry On” films were a popular British franchise that saw a total of 31 feature films produced between 1958 (Carry On Sergeant) and 1992 (Carry On Columbus), and are second only to the James Bond movie series as the second longest continual film franchise from our cousins across the pond (though the Carry On series was fallow between 1978 and 1992).  Lambasted by critics, the films were revered by moviegoers who made them certifiable box office successes. 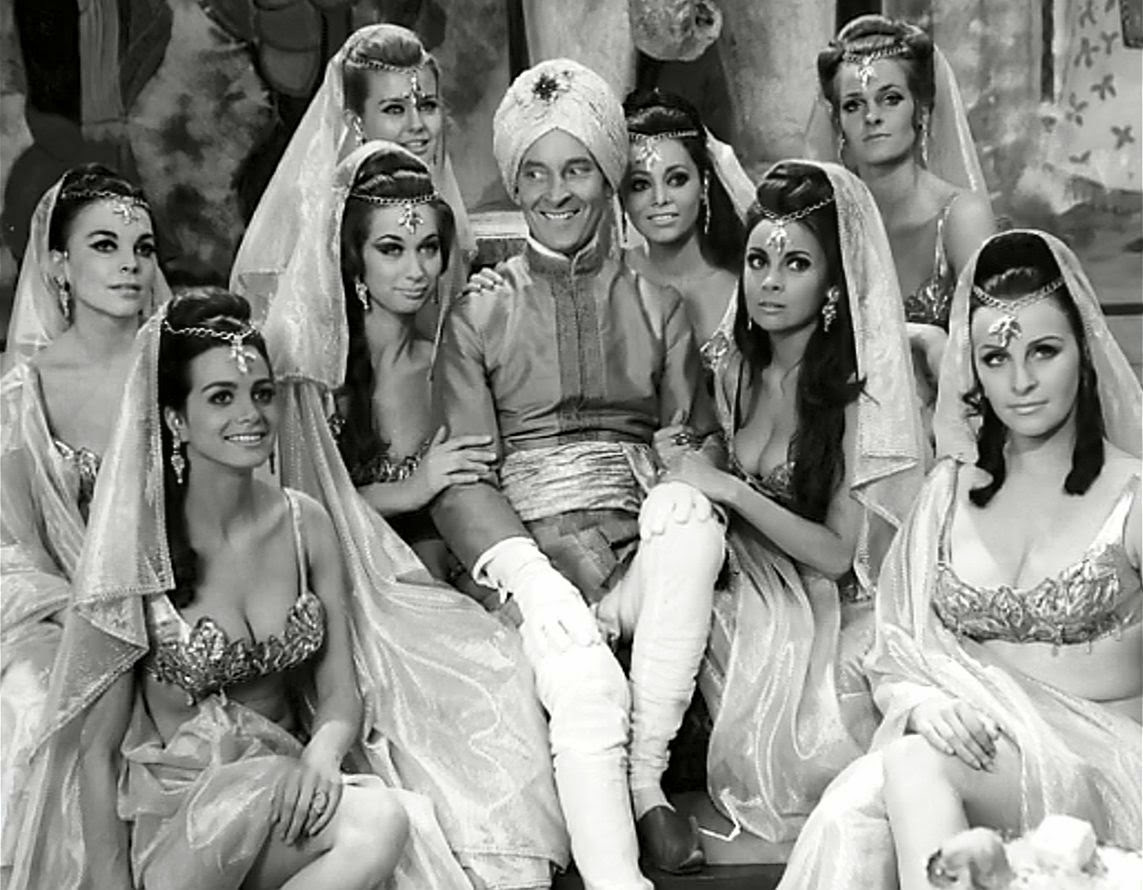 I’ve discussed the Carry On movies previously on the blog (with an entry on 1967’s Follow That Camel); they were low-budget films produced in the English music hall tradition, with their content consisting of bawdy, double entendre humor (often at the expense of ladies with bodacious ta-ta’s) and unapologetic slapstick that makes you giggle when it’s clever and wince when it’s not (and yet you can’t help but marvel at the utter shamelessness of it all).  The “gang” featured in the movies rotated from film to film but the usual suspects included Sidney James, Charles Hawtrey, Joan Sims, Kenneth Connor, Peter Butterworth, Hattie Jacques, Terry Scott, Bernard Bresslaw, Barbara Windsor, Jack Douglas and Jim Dale.  Comedian Kenneth Williams was the undisputed “Carry On” champ, appearing in twenty-six of the features as well as hosting a compilation release entitled That’s Carry On! (1978). Williams enjoyed making the movies (though he was critical of some of the entries), yet often complained about the pittance (£5,000 per movie) he was paid for appearing in them (and when you consider how much money they made, he had a reason to bitch).  But some sources report that when the producers offered to increase his salary (realizing how important Williams was to their success) Kenneth refused, stating he would feel guilty about being so well-paid “for such rubbish.” 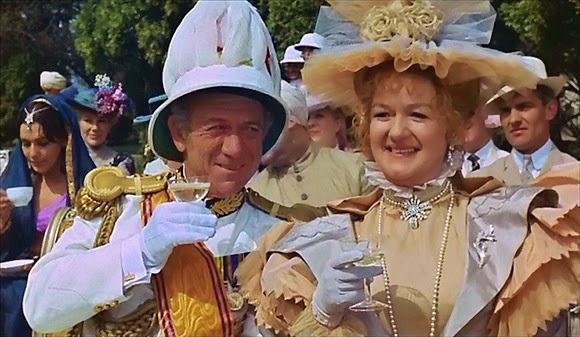 Kenneth Williams is the primary reason why I love the Carry On movies so much.  I first became a fan of the nostril-flaring comic through his appearances on such radio classics as Hancock’s Half-Hour and Round the Horne; to me, he’s the English equivalent of a Franklin Pangborn, and makes the weakest material funny simply with his arch, campy delivery.  But I also enjoy watching Sid James (also a Hancock veteran) and Joan Sims work together, their marvelous chemistry making mincemeat out of the wheezy old gags.  Up the Khyber was the only Carry On film to feature Roy Castle, who plays the part that would normally be taken by Jim Dale; Castle’s Captain Keene falls for the daughter of the Khasi, Princess Jehli (“an appropriate name for one set in so perfect a mould”), who’s played by Angela Douglas in her fourth and final Carry On outing.

To give you an example of what represents typical Carry On humor, here’s an exchange in which Sir Ruff-Diamond meets with the Khasi in an attempt to ward off a ticklish situation involving the discovery of the 3rd Foot and Mouth Regiment’s undergarments secret: 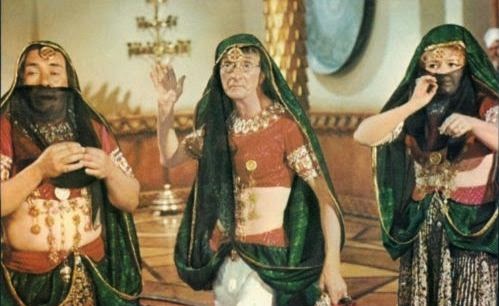 If you’re thinking it all sounds like an episode of Are You Being Served?—that’s probably the best way to describe it (except most of the movies run an hour-and-a-half).  I will admit, however, that I laughed the loudest at the remark made by Williams’ Khasi when a subordinate bangs a gong as James’ Ruff-Diamond arrives in the palace: “I do wish you wouldn’t keep doing that—rank stupidity!” (At the time, the Carry On films were being distributed by The Rank Organisation after their former association with Anglo-Amalgamated was severed in 1966.) 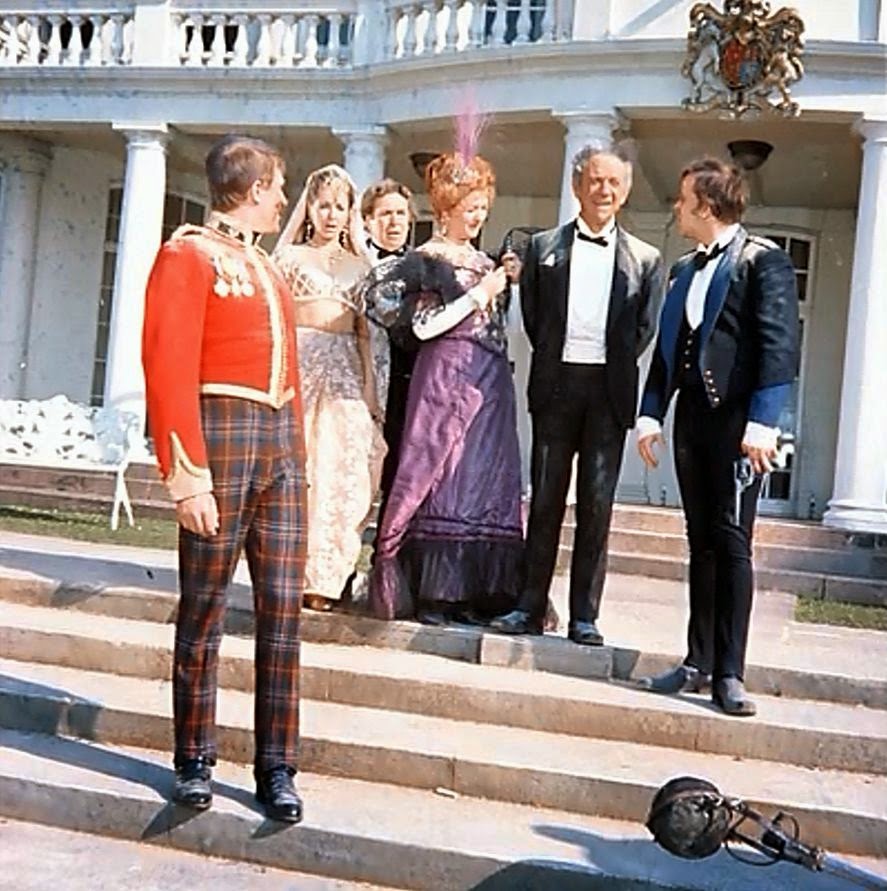 Admittedly, I’ve seen only a handful of the films in the franchise but of the ones I have watched I can’t deny Up the Khyber is one of the best.  The funniest portion of the movie to me occurs in the final two reels of the movie, when the “stiff upper lip” of the Brits is satirized (Keene: “Things look rather bad, sir—what are we going to do?”  Ruff-Diamond: “Do, Captain?  We’re British—we won’t do anything!”).  As the Ruff-Diamonds entertain several dinner guests in their residence, the battle raging outside resembles a sequel to Zulu Dawn.  The final gag of the film features a waving of the Union Jack, with “I’m Backing Britain” emblazed on it—a reference to a 1968 campaign designed to boost the economic morale of the country.  (I laughed at this, too—only because I recognized it from the opening scene in the premiere episode of Dad’s Army, which takes place in the present day before flashing back to the time period when the Home Guard was founded.) 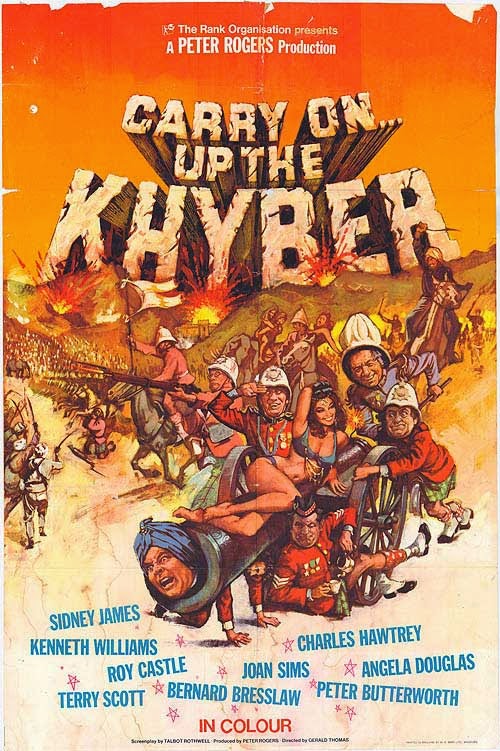 “Of course, they’re all raving mad, you know,” are the final words uttered in Carry On… Up the Khyber (the observation is made by Peter Butterworth’s Brother Belcher)—and to me, that sums up the spirit of the film franchise and why I get a kick out of watching them (of course, the same rationale can be applied to why I enjoy the British sense of humor in general).  Up the Khyber is available on DVD (paired with 1967’s Carry On Doctor, which features comedy legend Frankie Howerd) from VCI Entertainment…but you can also grab the majority of the series’ Rank films in two volumes as well.  The Greatest Cable Channel Known to Mankind™ has also tentatively scheduled a few of the series entries in January, to be shown on Saturdays at 10:30am: Carry On Constable (1961) kicks things off on the third of the month, followed by Carry On Regardless (1963; January 10), Carry On Cruising (1962; January 17), Carry On Cabby (1963; January 24) and Carry On Jack (1964; January 31).
Posted by Ivan G Shreve Jr at 2:00 PM

A truly inspired pick for our blogathon, mate! I really do need to see this!

I saw a couple of Carry On... movies when I was a kid, and, even though a lot of the humour went over my head, I still enjoyed them because they were so British. I realized, reading your post, that I haven't seen any of these movies since childhood. Time to change that!

Thanks in advance for recommending this one. :)

Really enjoyed this post, per usual, Ivan! I've only seen one CARRY ON... film so far (SCREAMING), and was underwhelmed, though did find the jokes intermittently funny. I definitely want to try another, and this one seems to fit the bill. I did think Kenneth Williams was the best thing about ...SCREAMING, so it's good to hear he's the highlight of this one, too.

Thanks again for taking the time out of your extremely busy schedule to contribute to the blogathon!

Words can't convey how happy I am you covered this film. Carry On is a British tradition and even though I don't find them particularly funny they're so iconic that (as a Brit) I feel obliged to love them. That said, Khyber is one of the better ones. The farce is well-suited to warfare and the military where the 'stiff upper lip' moniker reigns supreme.