B-Western Wednesdays: Moonlight on the Prairie (1935) 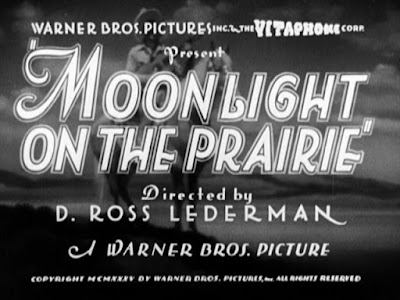 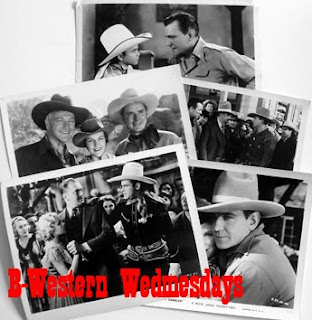 Cowpoke Ace Andrews (Dick Foran) and his sidekick “Small Change” Turner (George E. Stone) are in search of work after the carnival employing them hangs up its “out of business” sign (Andrews is a trick rider, Turner an “escape artist”).  Their unemployed status finds them drifting back to Ace’s old stomping grounds of Wagon Wheel Gulch…but for some of the townsfolk, Andrews is persona au gratin—he’s still a “person of interest” in the murder of Butch Roberts, a local rancher.  There was bad blood a-plenty between the two hombres—Ace threaten to kill Butch if he ever caught him mistreating a horse again—and legal shyster Buck Cantwell (Robert Barrat) seems to have a vested interest in making certain Ace checks into The Grey Bar Hotel. 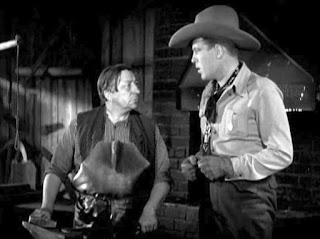 Butch’s widow Barbara (Sheila Mannors) arrives in town not long afterward, with her young son Dickie (Dick Jones) in tow.  Under the terms of Butch’s will (Barbara left her husband not long after they tied the knot when she found out what a wanker he was), Dickie must live on the ranch until he’s 21 for he and his ma to inherit the place…and if the Roberts aren’t on the property by midnight (thirty days after Butch is buried) that evening, they lose everything.  Barbara can’t get anyone in town to escort her out to the ranch, but once Ace learns all the details, he volunteers his and Small Change’s services.  The two men are momentarily detained by the town sheriff (Joseph King), who throws them into the hoosegow on the orders of Cantwell.  But the lawman isn’t convinced of either man’s guilt, and doesn’t make too concerted an effort to secure the door to their cell (allowing them to escape and high-tail it out the back). 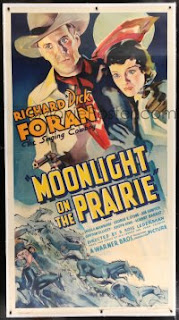 Ace and Small Change meet up with Barbara and Dickie on the way to their ranch…and though Luke Thomas (Joe Sawyer)—who’s been running the spread since Butch’s death…and bleeding it dry—does everything in his power to make sure they don’t meet the deadline (including sending a wild horse stampede their way), Ace gets Dickie on the property with two minutes to spare.  Andrews is convinced that both Luke and Buck found out about the terms of Butch’s will and dispatched Butch to the Happy Hunting Ground…and he’s able to prove it before the movie’s sixty-three-minute running time ends.

Moonlight on the Prairie (1935) was the first of fourteen westerns Richard “Dick” Foran (that’s how Foran was billed on the posters, btw) made for Warner Brothers between 1935 and 1938…and while I’ll admit I’m not much of a fan of these oaters (Foran’s warbling as “The Singing Cowboy” gets wearisome after a while) I was very entertained by Prairie.  (Boyd Magers at Western Clippings isn’t as generous as I will be—he gives Prairie two stars.)  I particularly liked how the film kicks off with the slam-bang B-Western action from the get-go, with Ace at the reins of a speeding stagecoach being attacked by outlaws.  (It’s then revealed that this is all part of his carnival act.) 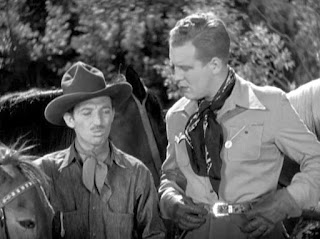 George E. Stone, the character actor fondly remembered as “The Runt” in all save two of the movies in the Boston Blackie film franchise, is a wonderful asset as “Small Change” (the Roberts kid calls him “Chicken Feed,” much to my amusement).  There’s a running gag in Prairie where Small Change is always hungry (might be a tapeworm) and when Ace tells him they either don’t have time to eat or no money, he tightens his belt another notch.  Once they hit Wagon Wheel Gulch, the two men decide to raise “eating money” in a saloon by passing the hat after Ace sings Covered Wagon Days (with Small Change on guitar).  It turns out the money won’t be necessary; a friend of Ace’s offers to stake them to a twenty-pound butt steak…and Small Change eagerly awaits the first meal he’s had in days.  The problem is: he’s trying to escape from being hogtied by a few of the saloon’s barflies (he’s demonstrating his escape prowess) …and by the time he works himself free the cook has gone home for the evening!  (Small Change finally gets his chow on in a funny sequence just before the end of the picture.) 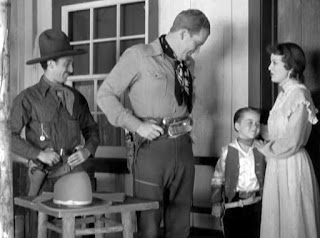 Sheila Mannors makes for a lovely leading lady, and she’s feisty as well, slapping villain Joe Sawyer (whose character of Luke Thomas is pretty much in his cups for the entirety of film) when he needs it while fending off the amorous advances of Robert Barrat’s Cantwell.  I’m not normally a champion of kid thespians as you are well familiar…but I liked Dickie Jones in this (hey—he played Henry Aldrich on radio at one time) and was chortling that his character’s name is “Dickie Roberts,” because it seems appropriate for a child star.  (Get it?  Dickie Roberts?  (Former) Child Star?  Okay, the staffer who assured me the David Spade reference would kill—off the payroll.)  Of course, I shouldn’t leave out the contributions of Foran’s noble steed “Smoke” (who even gets second billing in this!), a horse who comes to the rescue when the chips are down.  (Though Smoke is no Trigger, who probably looked up from his Advanced Math homework at his rival’s antics and just whinnied.  His homework is in Trigger-nometry, you know.  Oh, yeah…that writer is dead to me now.)

Moonlight on the Prairie is competently directed by journeyman D. Ross Lederman and scripted by William Jacobs (he adapted his story, “Boss of the Bar B Ranch”) Fortunately for me, I have only one more Dick Foran western to get through and then he’ll no doubt disappear from B-Western Wednesdays for a while (unless The Greatest Cable Channel Known to Mankind™ schedules more of them soon).  Moonlight on the Prairie is an exception to Foran’s sagebrush oeuvre, however, and it’s available on the Warner Archive MOD collection Dick Foran Western Collection.
Posted by Ivan G Shreve Jr at 7:00 AM