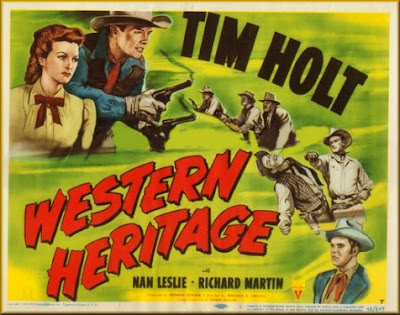 Ex-convict Joe Powell (Walter “Hunh?” Reed) drops in at the Tucson saloon where his old flame Cleo Raymond (Lois Andrews) works as a singer, and he attempts to rekindle that dormant romantic spark with promises of “diamonds and pearls.”  Powell produces a wallet from his inside pocket, and while he’s a little vague on the details he brags that they contain documents that will make that jewelry a reality and set Cleo and himself on Easy Street.  (Suffice it to say...his scheme isn’t entirely legit.)  When Cleo mentions that she’s seen three of his former confederates seated in the saloon during her performance, Joe high-tails it out the back…and comes face-to-face with the very trio he had hoped to avoid: Arnold (Harry Woods), Pike (Robert Bray), and Trigg (Tony Barrett).  As the men administer a proper pummeling to Powell for the purposes of securing the wallet, cowpoke Ross Daggert (Tim Holt) happens by to give Joe a hand.  Interestingly, that’s what Joe suggests Ross talk to when our hero suggests he report the incident to the sheriff. 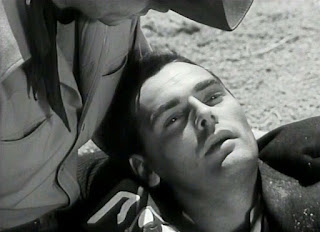 Back in his stomping grounds in San Carlos, Arizona, Ross and partner Chito Rafferty (Richard Martin) stop by the recorder’s office (where Ross’ best girl, Beth Winston [Nan Leslie], works) to make a payment on their ranch…and on the return trip home, witness Powell racing his horse at breakneck speed to escape the same bad hombres he had a run in with in Tucson.  Joe isn’t so lucky this time; he’s plugged by one of the outlaws…and with his dying breath, hands the wallet to Ross with instructions to deliver its contents to Cleo.  Ross doesn’t get too far before he’s drygulched by The Unholy Trio…and when he comes to, the wallet and Joe’s corpse have vanished.

The three outlaws soon make their presence known in San Carlos: posing as the dead Powell, Arnold presents Judge Winston (Jason Robards, Sr.)—Beth’s uncle—with a Spanish land grant that, per its written terms, places in his possession every square acre of land in the area.  As you can guess, this bit of breaking news doesn’t sit well with the good townsfolk—who set out to prove that the land grant is bogus, with Ross and Chito leading the way. 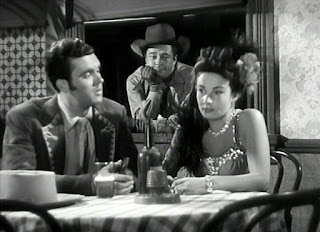 When I started watching Tim Holt westerns for B-Western Wednesdays I made a point to start with the post-War Holts so I could get them out of the way due to my stated dislike of Chico Jose Gonzales Bustamonte Rafferty (Martin).  Imagine my surprise when I sat down with Western Heritage (1948); Chito didn’t get on my nerves nearly as much as he usually does (maybe I’ve built up an immunity to his shtick) and I thought he was an asset in this one.  There’s an amusing scene at the saloon in Tucson where the Don Juan sidekick is romancing a dance hall girl (Rita Hall)—as Tim Holt’s Ross kibitzes from an open window—and when Daggert asks the gal if his partner has proposed yet she gets that look in her eye…prompting Chito to dive out that same window faster than you can hum Golden Slippers.  As Heritage is calling it a wrap, the subject of matrimony is again brought up as Chito and his lady love are riding with Beth and Ross in a wagon…and surprisingly, Chito does not run for the exits at the idea of getting hitched—he even pulls out four rings for the occasion! 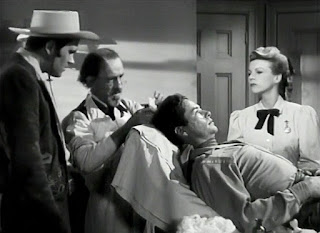 Nan Leslie (later a cast member on TV’s The Californians) has a great rapport with star Holt—this might be because the two of them were an “item” off-screen in addition to their work together in six of Tim’s oaters.  (Nan was also a “lady friend” of Gene Autry’s, from what I’ve read.)  I really liked Leslie (her Beth is sweet), but she’s just one member of a very impressive supporting ensemble that includes the senior Jason Robards (when he makes his appearance in Heritage you’ll spot the resemblance to his Academy Award-winning son right off the bat), former cowboy star Tom Keene (billed here as “Richard Powers”; there’ll be a Keene western or two featured in this space in future), Robert Bray, and Harry Woods (a cold-blooded cuss who orders one of his henchies to gun down San Carlos’ sheriff with the efficiency of licking a postage stamp).  Amusingly, Emmett Lynn—“the poor man’s Gabby Hayes”—is uncredited as the town doctor (he’s also the vet and dentist); I’m not so sure I would select him as my family physician.  Tony Barrett, an OTR veteran (Tales of the Texas Rangers) who later penned many episodes of Peter Gunn and produced The Mod Squad, has a nice turn as Trigg McCord and Walter Reed—you may remember him as the hero of (Big) Government Agents vs. Phantom Legion (1951), a Serial Saturdays presentation—is very good as the doomed Joe Powell.

Boyd Magers at Western Clippings gives Western Heritage a four-star rating; I heartily concur with this assessment, since I thought the screenplay by Norman Houston (who penned a previous Holt favorite of mine, 1949’s Stagecoach Kid) and direction by veteran serials/westerns journeyman Wallace Grissell solid and exciting.  Western Heritage hasn’t made it to MOD DVD as of this writing…so keep an eye out for it the next time you spot it on The Greatest Cable Channel Known to Mankind™’s schedule.
Posted by Ivan G Shreve Jr at 7:00 AM

Glad you liked Chico Jose Gonzales Bustamonte Rafferty in this one because, even though I enjoy most things Tim Holt is in, when it comes to his B movie westerns, it is the Irish Mexican that I look forward to seeing! Come to think if it, I usually lean towards the sidekick making or breaking the oater for me even though that is not true in other movie genres.

Greg leaned over the back fence:

Glad you liked Chico Jose Gonzales Bustamonte Rafferty in this one because, even though I enjoy most things Tim Holt is in, when it comes to his B movie westerns, it is the Irish Mexican that I look forward to seeing!

I cannot deny it -- Chito really stepped up to the plate in this one. A first-rate B-oater.