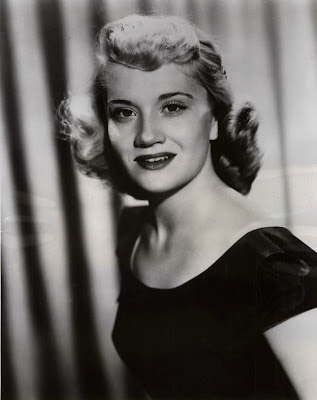 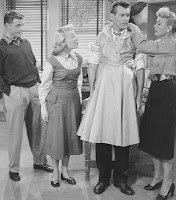 Though you can’t say I didn’t give it the old college try—I just couldn’t find a way to work the subject of today’s birthday greeting into the ClassicFlix natal anniversary shout-outs appearing on a Facebook post or Twitter tweet near you.  Actress Gloria McMillan, beloved by devotees as Harriet Conklin—daughter of Madison High School martinet Principal Osgood Conklin (Gale Gordon) on Our Miss Brooks—is celebrating her 77th birthday today…and apart from three seasons on the TV version of the radio sitcom and the 1956 movie based on both, McMillan’s film/TV resume was a bit scanty.  But I suppose that’s just as well, since that means she gets a blog post to herself (well…almost—you’ll find out in the third paragraph).

Radio was a different story—McMillan started emoting over the ether at the age of 4 (which means she began work on OMB when she was twelve) and in addition to Brooks, made the rounds on such programs as The Adventures of the Saint, The Eddie Bracken Show, Family Theatre, Fibber McGee & Molly, The Halls of Ivy, The Lux Radio Theatre, Meet Mr. McNutley, The NBC University Theatre, The Phil Harris-Alice Faye Show and Romance.  McMillan did some later TV work (Dr. Kildare, Centennial, Perfect Strangers) and the occasional movie (Smile) after her stint on Brooks but devoted most of her time to running a performing arts school in with her husband.  Through the magic of YouTube, here’s a TV episode of Our Miss Brooks with all the regulars (and Paula Winslowe’s in this one, too, as Mrs. Conklin) from : “Madison Mascot.”

The purpose of today’s post is not only just to give Gloria a birthday hug—yesterday, when I was working on the TV-on- info, I was also going to mention a few upcoming blogathons that I thought might be of interest to the TDOY faithful.  Only when I got to the end of writing the darn thing that I realized I omitted this info, and so decided to save it for another day when I was able to keep my eyes open.  And so it goes. 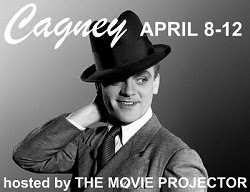 I’ve already previously mentioned The James Cagney Blogathon that will be hosted by my friend and fellow CMBA member in good standing, R.D. Finch of The Movie Projector—that will get underway from April 8-12, and a look at the schedule here indicates that this is going to be a really great ‘thon.  Thrilling Days of Yesteryear (that would be me) is going to cover the 1950 Cagney film Kiss Tomorrow Goodbye (I’m slotted for Thursday, April 11) and though you may find this hard to believe…I actually located the on one of the miles and miles of shelves here at Rancho Yesteryear.

But Mr. Finch is adding a little inducement for Cagneython—he’ll be giving away a copy of the 2-disc Special Edition of Yankee Doodle Dandy (1942), the film that won Cagney his Best Actor Oscar.  All you have to do to enter is to send an e-mail at cagneygiveaway(at)gmail(dot)com with “Yankee Doodle Dandy” in the subject line before PDT on …and the winner of this free swag will be chosen by random drawing.  (R.D. does ask for just one entry per person…and since we are on the honor system here in the , I’m sure you will comply with his request.) 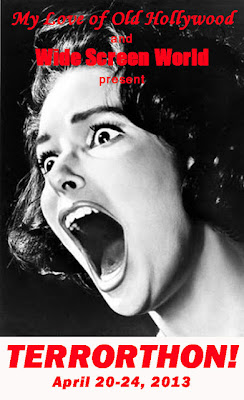 Also in April: good TDOY chums Page of My Love of Old Hollywood (now with 37% more Shirley Temple!) and Rich of Wide Screen World will be hosting Terrorthon! (Filmed in 3-D!) from the 20th to the 24th—an event spotlighting those horror movies from our childhood that gave us the willies and made us double check that there were no monsters under bed or in closet before settling in for the night.  I kind of went with an odd choice for the movie I’m going to cover in the Terrorthon!—when I was a kid, there really weren’t too many movies that gave me nightmares but I remember watching a 1965 Amicus production entitled The Skull, directed by Freddie Francis and starring Mr. Peter Cushing hizzownself.  Scared.  The.  Piss.  Out.  Of.  Me.  I haven’t seen the movie since that time (probably because I’d find it lame and end up disgusted with myself) but I invested in a copy of the from Amazon to rectify this situation (hey—it cost me $2.25, and I’m sure I can write it off on my taxes next year) and will watch it for this ‘thon.  It’s either going to dredge up sweat-inducing childhood memories…or it’s really going to suck.  We shall see what we shall see. 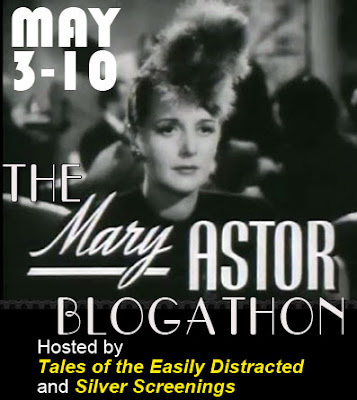 Finally, Dorian (or “Dor,” as I get to call her) of Tales of the Easily Distracted and R.A. Kerr at Silver Screenings have joined forces to host The Mary Astor Blogathon from May 3-10, which will honor the Academy Award-winning actress’ 98th birthday (May 3)…and all interested bloggers are encouraged to participate.  Though there are no rules barring folks from covering the same film, I had to resort to Plan B when I learned that someone had already called dibsies on the Astor film I wanted to review—Act of Violence (1949).  (So I’m going to do Smart Woman [1931]—I only hope I can find my copy.  But if that doesn’t work, I have a Plan C, too—I’ll teach Dor that I’m a force to be reckoned with!)  As you can see: there’ll be no shortage of blogathon fun in the next couple of months…and if you’d like to get in on the action skate on over to the host blogs to sign up.
Posted by Ivan G Shreve Jr at 9:00 AM