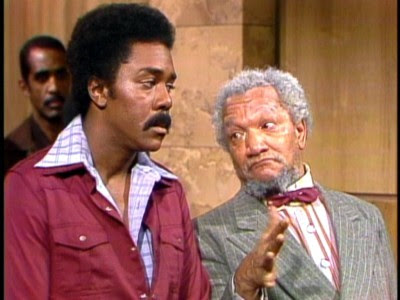 Forty years ago on this date, NBC premiered Sanford and Son—a sitcom starring legendary nightclub comedian Redd Foxx and stage veteran Demond Wilson as a bickering father-and-son team of junk dealers that became a smash sensation in its first “half-season” despite its “time slot of death” at 8pm on Friday nights (the series ranked #6 in the Nielsens in its freshman start).  The success of the series allowed NBC to establish a beachhead on Fridays, turning the later Chico and the Man into a Top Ten favorite and putting such series as The Rockford Files and Police Woman in the Top 20. 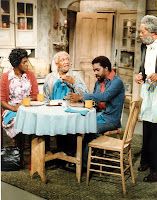 Although Sanford and Son seemed like an unlikely hit at the time, the producers of the program—Norman Lear and Bud Yorkin—had to suspect the show would catch on because of its pedigree: it was an Americanized version of Steptoe and Son, a popular Britcom that had been entertaining U.K. audiences since 1962 (it would be the second success of a British sitcom adaptation for the two men, following Tandem Productions’ All in the Family—known as Till Death Us Do Part across the pond).  I wrote a little tribute to the series that you can read at Edward Copeland on Film…and More, and in revisiting Sanford and Son discovered to my delight that the show still holds up pretty well today.  There are probably more than a few of you who are saying right now “No duh, you big dummy”…but it’s been a while since I’ve seen the series and when I did run across it (I caught it on TVLand once or twice during my hospital stays in March-April 2010, if memory serves) the episode always seemed to be one of the outings from the last two seasons when the show wasn’t quite as good. 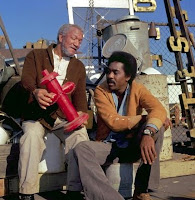 I watched a few over at Hulu.com in preparation for my Copeland essay, and enjoyed those so much that when I happened to spot the Sanford and Son: The Complete Series box set on sale at DeepDiscount.com for $23.23 I popped that puppy in my shopping cart faster than you can say “I’m comin’ to join ya, Elizabeth!”  (17¢ an episode—it’s a junk man’s dream.)  Had I known that our household would soon be receiving the show as part of our recent acquisition of Antenna TV (which repeats the sitcom at weeknights) I might have given it a second thought but that’s the great thing about TV-on-DVD—it doesn’t have to conform to any schedule.
Posted by Ivan G Shreve Jr at 9:30 AM

Not my favorite series from the 1970s, but it has a great theme song!

This is one of those series that grows on you. I haven't seen it since who-knows-when, but I remember being charmed by Redd Foxx. He had a reputation as a very "blue" comedian in his day, but he made a hugely successful transition to TV without so much as a #$%!&*...

This is one of those series that grows on you.

For years, I was always a bit of a snob about Sanford and Son mainly because I'm more familiar with the source material, the Britcom Steptoe and Son (I have the entire run of that series on Region 2 DVD. But Sanford can still work its own special magic; I get a tremendous kick out of watching Foxx and especially his interaction with Wilson. It's enjoyable from start to finish.

The first 3 seasons are fabulous, with the 2nd season in particular right up there with the first seasons of BILKO and F TROOP among my all time favorite years for a sitcom. "The Card Sharks", "Lamont Goes African", "Blood is Thicker Than Junk"...all classics. Also worked a little better once Don Bexley and Whitman Mayo moved to the forefront and Slappy White went back to the stage.