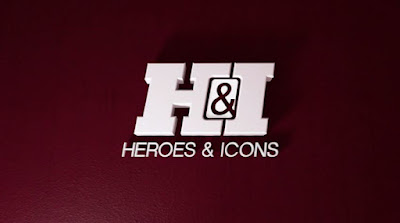 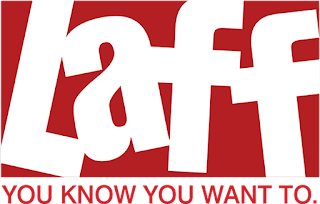 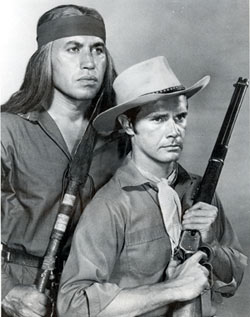 I’ve seen the 1950 James Stewart film that inspired the TV version of Broken Arrow, but I’ve never actually seen an episode of the small screen version.  (My mother announced that she has, and she was kind of smug about it.)  I’m just pleased that DISH added the station (they removed the Toccoa, GA station that had a fairly impressive rerun library many months back), and perhaps there will come a day when I will be able to rejoin my MeTV brethren and sistren.  Apologies for the dearth of posts this month, by the way; I've been distracted by various shiny objects but I hope to have a more robust posting schedule in May.
Posted by Ivan G Shreve Jr at 1:30 PM 7 comments:

After The Thin Man 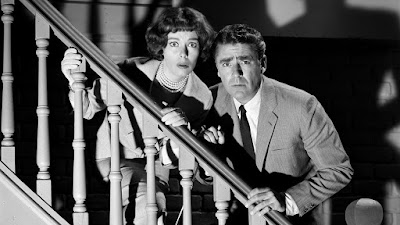 Back in May of 2009, I wrote an essay for Thrilling Days of Yesteryear that was to act as a companion piece to the first contribution I did for Edward Copeland’s Tangents—a post commemorating the 75th anniversary of the release of The Thin Man (1934).  I tackled the small screen version for TDOY; the classic William Powell-Myrna Loy mystery comedy was the inspiration for a TV show that featured Peter Lawford and Phyllis Kirk in the Powell and Loy roles of Nick and Nora Charles.  (Asta played “himself” in the series.)  The Thin Man’s television cousin ran two seasons over NBC from 1957 to 1959, and then made the rerun rounds on the network’s daytime lineup from 1959 to 1960. 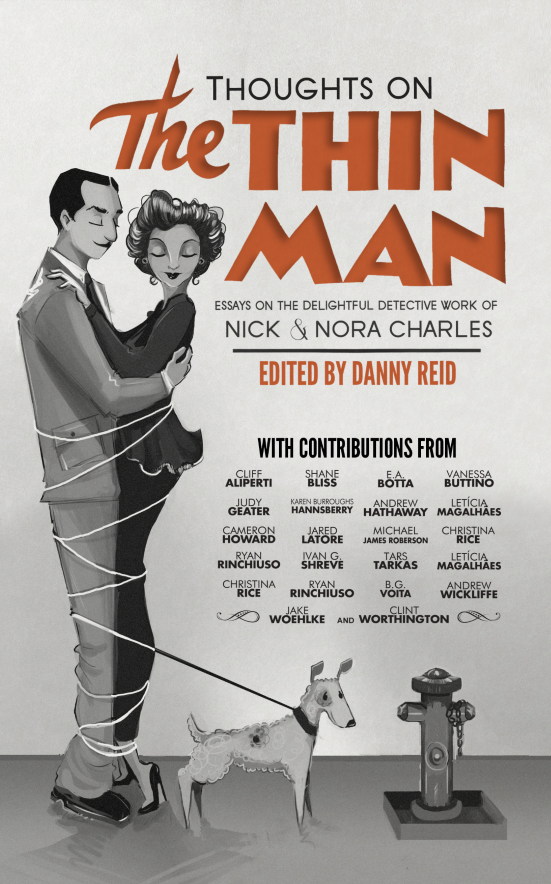 I was a little pressed for time when I wrote the original 2009 blog post—an essay that I later expanded for a piece that was included in the e-book Thoughts on The Thin Man, edited by my Classic Movie Blog Association colleague Danny Reid—so I didn’t get to sample as many of the shows as I had hoped.  I thought of Danny when I learned that GetTV was planning on running reruns of The Thin Man TV series on Wednesday nights in March, and since I had planned to DVR all twenty-five episodes (from the first season), I told him I’d see what I could do for him (he confessed to me he’d never seen the boob tube version).  In my efforts to dub the recordings to DVD, I decided to edit out the channel’s generous commercial content…which means I pretty much watched all of the episodes.

Of the twenty-five, I had seen three episodes previously: “The Dollar Doodle” (the premiere installment), “The Duke of Sing Sing,” and “Double Jeopardy.”  I’ve stated on the blog in the past that many times a person’s enjoyment of a movie or TV show will be improved by the quality of the print, and I think The Thin Man is a good example of this.  The previous Thin Man episodes in my collection were purchased a good while back through my longtime professional association with Rodney Bowcock (though Martin Grams also had a hand in it—so it would be more fitting to call it “Gramcock”), and the source of many of those episodes were reruns from KXLI-TV Channel 41 (St. Cloud, MN)/KXLT-TV Channel 47 (Rockford, MN).  The GetTV prints are far superior (there are a few strong rumors that The Thin Man is being readied for a future DVD release), and are nice and sparkly.

While “Dollar Doodle” isn’t a particular standout, I’ll give it a high mark for casting an uncredited Joe Flynn as a jewelry store clerk (he kind of steals the scene with a bit of understated sarcasm).  “Sing Sing” has a nice contribution from character great/professional sneerer Robert J. Wilke.  But I overlooked an important guest appearance (aside from TDOY fave Edward Binns) in “Double Jeopardy”: 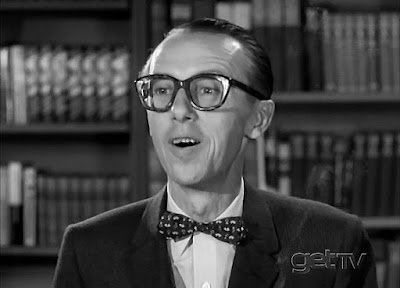 Yes, it’s the incomparable Olan Soulé, making a brief appearance as a bookseller.  The character actor content in these reruns compensates for the fact that for a wealthy couple, Nick and Nora Charles function in rather tatty surroundings (for an M-G-M production, these sets look kind of cheap).  (A Facebook chum of mine joked: “I've seen better-dressed sets in Racket Squad!”) 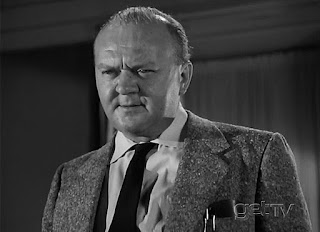 Of the episodes I had not seen…there were some very pleasant surprises.  “The Acrostic Murders” (11/01/57) is an offbeat entry involving a little old lady (Mary Young) who’s on a murder spree (Charles Lane and serials henchman Anthony Warde are the cops investigating this one with Nick).  Percy Helton’s presence in “The Fatal Cliché” (11/15/57) makes it more interesting than it should be, and “Robot Client” (02/28/58) is a silly but fun story about Nick’s investigation into a murder involving Robby the Robot.  (“Client,” as my kemosabe and guest reviewer Philip Schweier pointed out in the comments accompanying the last essay, is also available on DVD—it’s an extra on the release of Forbidden Planet.  But it also gets props for casting George “Cyrus Tankersley“ Cisar as the cop investigating the case, and Robert Cornthwaite—a.k.a. “Dr. Carrington” from 1951’s The Thing from Another World—as a similar mad scientist.)  One episode I did not have in my collection is “Murder is Where You Find It” (02/14/58), in which Whit Bissell plays a blind news seller who’s witnessed a murder (M Squad’s Paul Newlan is one of the suspects, as a man nicknamed “The Ice Pick.”)  (I have a total of 64 episodes…I need eight to complete my collection.)

I really enjoyed “The Dead Giveaway” (12/13/57), which finds Nick on a TV quiz show (“We Have a Mystery”) investigating the murder of a man played by longtime The Guiding Light actor William “Henry Chamberlain” Roerick (“Oh Nola Nola Nola…”).  At the risk of spoiling it for you, the chief suspect is Nick’s fellow quiz show adversary…played by OTR veteran Les Tremayne, which means you have an actor who played Nick Charles on radio squaring off against the TV Nick: 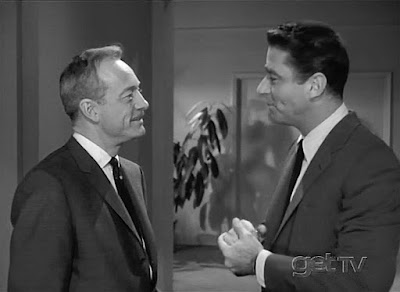 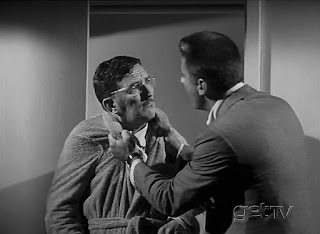 “Unlucky Lucky Number” (01/24/58) is another delight because it lards the guest star quotient with Howard McNear (as an apartment manager), Herb Vigran (as a picture snatcher), Sid “Charley Halper” Melton (as a bookie), John Doucette (as a butcher) and the thinnest I’ve ever seen Simon Oakland (as a barber).  Still another character actor-packed entry is “The Pre-Incan Caper” (02/07/58); Werner Klemperer is the main guest star (as one of Nick’s adversaries, who bets him he can steal an antique right from under Mr. Charles’ nose), but you also have on hand Stanley Adams, Henry Kulky (fittingly, his character is an ex-wrestler), and Mayberry’s resident snob and witch Hope “Clara Edwards” Summers: 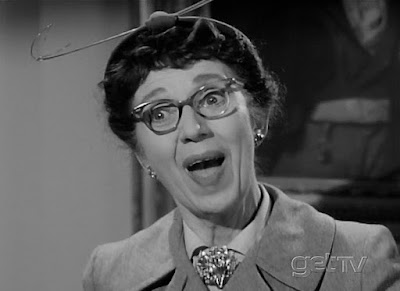 Singer Vic Damone plays himself in the appropriately-titled “The Damone Dilemma” (01/17/58); he has difficulty extricating himself from a lovesick woman (Yvonne Lime) whose gangster brother insists they tie the knot despite Vic already being married.  (The hood is played by TDOY fave Stacy Harris, so I cut this one a little slack despite not being a fan of Damone’s.)  As for “The Scene Stealer” (01/10/58), the show takes advantage of its MGM-TV status to shoot on many of its backlots, and include cameos from both George Murphy (in the commissary scene) and this guy: 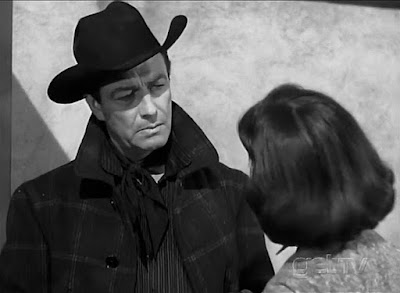 And if you’re curious about the origins of Nick and Nora, “Asta Day” (01/03/58) relates how the couple got together.  It’s not a particularly exciting story (there’s no murder involved—Nick is merely looking into the matter of a man [William Hudson] who’s run out on his fiancée) but seeing “little” Asta is worth the price of admission: 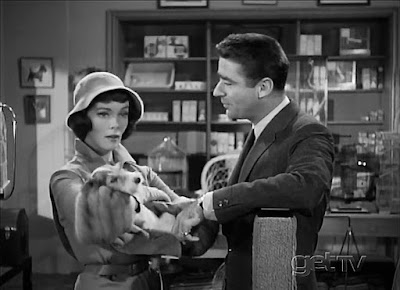 Plus Sandra Gould, Gene Roth, and Frank Jenks are on hand.  Seriously, The Thin Man is most enjoyable if you’ve a fixation with character actors like myself.  Phyllis Kirk is delightful as Nora, and while Peter Lawford isn’t terrible as Nick I still maintain the guy doesn’t seem like an ex-gumshoe but rather someone who’s just finished a few sets on the tennis courts.  There are a few sly references to the couple’s past imbibing days: they get a bit tipsy in “The Angel Biz” (10/04/57), and then there’s this hilarious exchange with McNear’s character in “Unlucky Lucky Number”:

DINGLE: …and coincidentally, it’s just the color of your eyes…baby blue…
NORA: Oh, well, Mr. Dingle…how observant of you…
NICK: It’s too bad they’re not the color of my eyes…I’ve never seen bloodshot walls… 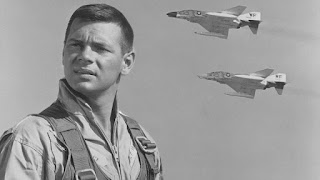 William Powell would have had a field day with that one.  I didn’t mean to give the impression that I don’t like The Thin Man TV series—I think it’s very entertaining, provided you don’t make too many comparisons to the movies.  Its brief stint on GetTV was part of the channel’s commitment to running classic television programs that may have flown under the radar; Wednesday nights in April they’re running reruns of the Gene Roddenberry-created The Lieutenant, supplementing their Saturday afternoon Westerns lineup (The Tall Man, Laredo) and their variety show schedule on Monday nights (The Judy Garland Show, The Merv Griffin Show).  But I received an e-mail from getTV’s Cindy Ronzoni this morning announcing that beginning May 2, The Thin Man will become a regular part of the channel’s weekday lineup…along with Nanny and the Professor, The Ghost and Mrs. Muir, and many other “retro” favorites.  Here’s the skinny: 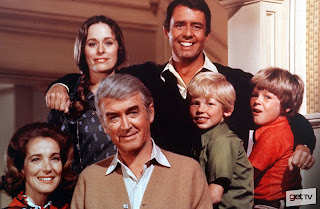 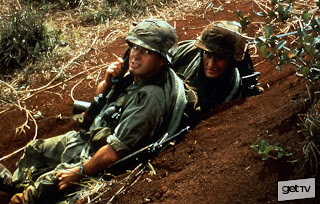 “Count me out tonight, angel…I’m too busy being a winner…” 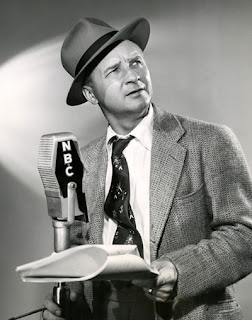 I’d like to extend a laurel and hearty handshake (see what I did there?) to the two winners in Thrilling Days of Yesteryear’s recent giveaway of Radio Spirits’ “Shakedown”: an eight-CD set of sixteen vintage broadcasts from radio’s The Adventures of the Falcon.  The Random.org gods smiled down upon Scott L. of Watertown, Wisconsin and Richard R. of Glendale, Arizona by making them the lucky winners; as always—I wish I had enough of these sets to hand out to everyone who entered, but alas…I cannot.  (Besides, I’m sure it would not go over too well with the RS folks: “You need how many Johnny Dollar sets?”)

I’m going to take a short break from the bestowing of swag…but rest assured, I have two upcoming doozies to hand out for next time; two recent RS sets of which I am most proud, liner note-wise.  I also have a couple of items that will be posted to the blog this week (I know, I’m trapped in “slack” mode again) so I humbly beg for your indulgence and suggest you keep an eye peeled for more sweet giveaways.  Remember: Thrilling Days of Yesteryear is the phrase that pays!
Posted by Ivan G Shreve Jr at 10:30 AM 3 comments: