“Broken Arrow? This is why we can’t have nice things!” 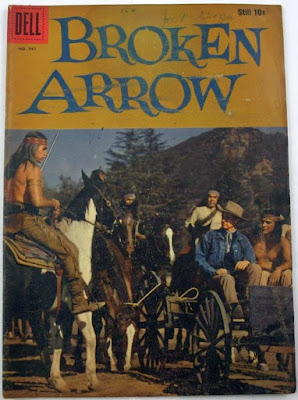 This morning, whilst I dubbed onto a blank disc a copy of Passport to Suez (1943) for my pal Andrew “Grover” Leal, I decided to supplement Suez’s short running time (72 minutes) with a pair of episodes from the 1956-58 TV Western Broken Arrow, which we recently acquired when DISH Network added station WGTA to its lineup.  I mentioned in Saturday’s post that this was a most welcomed surprise in the House of Yesteryear, because a similar channel (in the same spot as WGTA is now on DISH, channel 32) that offered up the occasional tasty classic TV run had been yanked about the time we signed on as DISH subscribers (in July of 2015).  What I did not know—or rather, would have known had I did a little more research—was that this was the same channel.  Hereby hangs a tale.

WGTA (“Greenville to Atlanta”) was originally WNEG, a Toccoa, GA station that had been in operation since 1984, primarily serving four Georgian counties that comprise the Greenville/Spartanburg/Asheville market.  (Athens, Gainesville and Braselton comprise the station’s secondary market.)  In 2008, the station was sold to the University of Georgia, who had planned to use WNEG as a training facility for UGA’s journalism and broadcasting majors, and the station became WUGA in May of 2011.  But the UGA experiment came to an end when the station was sold to Marquee Broadcasting in March 2015, and it adopted its WGTA call letters in July (just as we were subscribing to DISH).  If you’re like me, and you do a lot of channel hopping just to see if there are any non-home shopping channels on DISH, you would have come across a disclaimer on channel 32 stating that the channel was no longer available but that you (the viewer) should keep an eye out for replacement programming.

So DISH graciously gave us Heroes & Icons on WGTA’s 32.1; the 32.2 portion of WGTA features programming from Decades! and 32.3 is a Movies! affiliate.  I was genuinely surprised that the ‘rents have clutched WGTA to their bosom—they amused themselves Saturday mornings with reruns of the 1966-68 Tarzan series (my father wanted to know why the ape man spoke perfect English and I had to explain to him that it was Johnny Weissmuller who attended The Tonto School of Speech…not Ron Ely) and Dad put on a pair of Wanted: Dead or Alive episodes this morning while he engaged in his morning paper ritual.  As for myself, I took a stroll down Memory Lane last night with back-to-back reruns of Hill Street Blues. 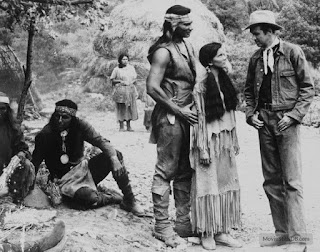 But leave us return to the matter of Broken Arrow.  The TV series premiered six years after the release of the 1950 movie version (adapted from Elliott Arnold’s novel Blood Brother) that starred James Stewart and Jeff Chandler, with a May 1, 1956 pilot that originally aired on CBS’ The 20th Century-Fox Hour.  In that pilot, actor John Lupton played Stewart’s role of Tom Jeffords and future Fantasy Island mogul Ricardo Montalban as Cochise.  By the time Broken Arrow was greenlighted as a regular series in the fall of 1956, Michael Ansara took over as Cochise—he made for a very convincing Native American chief despite his Syrian-Egyptian origins. 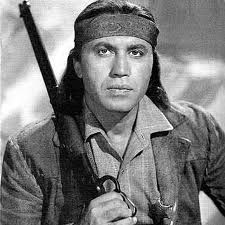 Ansara wasn’t particularly jazzed about his gig on Broken Arrow.  “Cochise could do one of two things—stand with his arms folded, looking noble; or stand with arms at his sides, looking noble,” he explained to a TV Guide interviewer in 1960.  But I have to be honest; Mike is the main reason the show works, in addition to the fact that it was one of the few small screen oaters at that time to portray Native Americans in a positive light.  The first installment I watched was “Indian Agent” (10/09/56), in which Jeffords falls for and marries Sonseeahray, the maiden who later draws her rations (Debra Paget played her in the 1950 movie—here it’s Sue England in the role) as a result of a fight between Cochise’s men and a bunch of “the-only-good-Injun-is-a-dead-Injun” yahoos.  It’s a well-done episode that features Tom Fadden (a series regular as “Mitt Duffield”), Robert Warwick, James Griffith, Michael Pate, Kenneth MacDonald, and Anthony George.  Ansara sure gets his nobility workout here, as he tries to counsel the hot-headed Jeffords not to fly off the handle in the face of revenge. 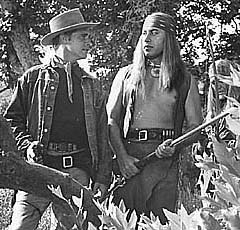 The tables are turned in “The Captive” (10/23/56); here Jeffords advises Cochise to keep calm and carry on when an Apache brave (Ray Stricklyn) is kidnapped from the tribe.  The boy is a white man raised by Apaches; his grandmother (Kathryn Card) tries to persuade him to return to his birthright…and when he refuses, a skeevy lawyer (who else but Trevor Bardette) arranges for the young man to be snatched, inviting the ire of the Apaches.  Lane Bradford is in this one (appropriately as a henchman), and I chuckled to see Dick Wessel tending bar.

Broken Arrow ran only two seasons on ABC (a total of 72 episodes—seventy-three if you include the pilot) but bounced around on its daytime and evening schedules in reruns until 1960.  I can see why this one hasn’t been given the nod for a DVD release: the prints are not particularly sparkly (I think Facebook chum Hal Erickson pointed this out to me before I watched the show) and of course, they’ve whittled down the running time in order to squeeze in an extra commercial or two (I clocked both episodes at 23 minutes).  But I’ll certainly continue to DVR the shows because I think the series is entertaining; springing from a time when it was possible to do dramatic stories in the short span of a half-hour. 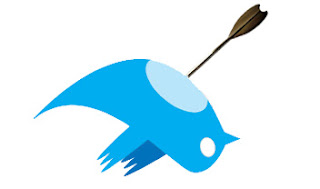 (Anti) Social media update: You may have noticed (then again, maybe not) that I recently deactivated my Twitter account—a proposition that I had been considering for some time…yet refrained from doing so for a number of reasons.  Long story short, I pulled the plug on Twitter this weekend…but I want to reassure people that it’s not for anything you did; I’ve just become frustrated with the whole 140-character “social media” experience.  I’m still on Facebook (I have argued all along that while the FB content can sometimes get poisonous, it’s still preferable to Twitter any day of the week) so I’m able to share pictures of my niece and nephew with their “Nana” and “Pop” from time to time.  Go in peace, my children.
Posted by Ivan G Shreve Jr at 3:30 PM 5 comments: