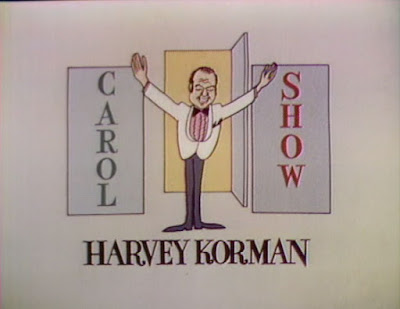 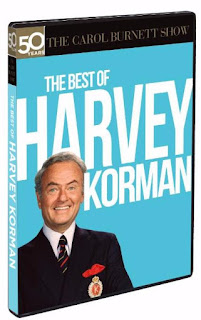 For ten seasons on TV’s The Carol Burnett Show, comic actor Harvey Korman was not only one of the hardest working second bananas in the variety show bidness but one of the funniest.  Korman left the series before its eleventh and final season to pursue projects that would allow him to take center stage (he was offered a contract by ABC-TV and did a self-titled sitcom in 1978 that came and went) and while he never quite captured the stardom he sought he had plenty of laurels to rest on as far as his boob tube legacy was concerned (not to mention his sidesplitting turn in Blazing Saddles [1974]).  During his stint on the Burnett show, Harvey was nominated six times for an Emmy (and he won four trophies) and four times for a Golden Globe (he won in 1975).  “He was fearless: he sang, he danced, he ad-libbed, he pranced, and he made TV audiences roar with laughter,” observes a Time Life press release for a DVD due to be released tomorrow (August 1): The Best of Harvey Korman. 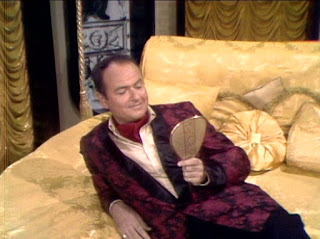 My chum Michael Krause at Foundry Communications was good enough to slip me a screener, and while people may quibble what constitutes Mr. Korman’s “best” there’s certainly nothing to be ashamed of with regards to the material on this disc.  There are four telecasts (three of which haven’t been seen in 40 years) present, with the first a very funny show that closed out the first season of Burnett’s series on May 13, 1968.  Carol has no guest stars on this telecast; it’s billed as a “family show,” and focuses on her talented ensemble—Vicki Lawrence performs Best of Both Worlds and Lyle Waggoner does a not-too-shabby By the Time I Get to Phoenix—including a hilarious sketch where Harvey ducks into his dressing room to avoid his “fan club” (the women who comprise that aggregation reminded me of the same matrons who were gaga for Jack Benny) and fantasizes about being a Hugh Hefner-type.  There are funny segments of “Carol and Sis” and “The Old Folks” on hand, and a sprightly version of Together by the cast just before the wonderful closing featuring Carol’s charwoman character.

A November 18, 1968 episode is unusual in that it was taped during a musician’s strike…which necessitates Carol having to hum her show’s opening theme and sing the familiar I’m So Glad We Had This Time Together close with choral accompaniment.  A telecast without an orchestra might be a handicap if Ella Fitzgerald is your musical guest (Ella could have just scat-sang a couple) but the First Lady of Song, Carol explains later, lip-synched to previously recorded numbers…and demonstrates by doing her own lip-synch to The Trolley Song (which experiences speed problems during the playback, and Burnett’s facial expressions are hysterical).  There’s also a lip-synch performed to the Andrews Sisters’ Bei Mir Bist Du Schön…executed by Carol, Vicki, and Harvey (in drag) in a “Carol and Sis” sketch.

Carol Burnett and her writers were classic movie fans, and many of her show’s best-remembered sketches were hilarious parodies of movies.  The November 18th show features Carol and guest Sid Caesar in “Mrs. Magnificent” (Mrs. Miniver), and as much as I revere Sid he’s forced to take a back seat to Burnett’s antics as a stiff-upper-lip British woman who’s unsettlingly nonchalant about being shelled by the Germans during WW2.  (Sid reprises some bits from Tars and Spars in the show’s opening Q&A segment, and he’s much funnier there.)  A September 29, 1969 show with guests Bernadette Peters and Nancy Wilson teams the two guests with Carol in a big musical number split in three parts: Wilson does a kind of Casablanca parody, and Peters is the novice who’s going out a nobody but coming back a star in a send-up of Warners’ Depression-era musicals.  In between these two, Carol apes Carmen Miranda and completely loses it when Harvey slips and falls on his Gazoo during the number.  (At one point in the song Korman ad-libs “I suppose they’ll want the Emmy back,” breaking Carol up.) 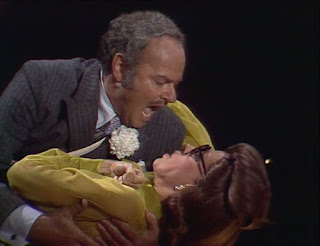 A spoof of Summertime (the 1955 Katharine Hepburn film) is the highlight of the fourth and final show on The Best of Harvey Korman, a telecast from October 27, 1971 with guest stars Tim Conway and Diahann “Julia” Carroll.  Tim does his shuffling old man character in a sketch about a jewel robbery (Harvey manages to keep it together for the most part despite a couple of lapses into hysterics) and Carol and Diahann do the number that you see Carol perform with Lucille Ball in that segment that Burnett narrates on The Greatest Cable Channel Known to Mankind™, Chutzpah.  Carol Burnett fans will want to nab this very entertaining DVD for their shelf—a fitting reminder that whether he was supporting Carol or Danny Kaye, Harvey Korman was the yardstick by which second bananas should be measured.
Posted by Ivan G Shreve Jr at 7:00 AM