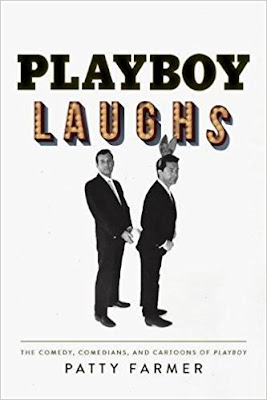 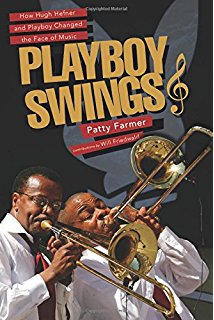 “Since the launch of Playboy magazine in 1953, two elements have been remarkably consistent: the first is the celebration of nubile, female flesh and the second is Playboy’s involvement in the music scene.  The Playboy experience was never just about sex but about lifestyle, and music—particularly the finest jazz, a personal passion of Hefner’s—has always been an essential component of that lifestyle.”  So states the biography of author Patty Farmer, acknowledged to be the expert on the entertainment side (performers, television, etc.) of the legendary magazine that introduced the phrase “I only read it for the articles” into the American lexicon.  Farmer chronicled “the rise, history, and cultural impact of the Playboy empire, including the magazine, clubs, music festivals, and television shows” in her book Playboy Swings—published in 2015 after the success of The Persian Room Presents (2013), a history of the Plaza Hotel’s famed nightclub.

Patty’s follow-up to Swings—which will be released August 3—is Playboy Laughs, a book that concentrates on the comedic side of Hefner’s empire.  (You don’t need to be familiar with the earlier book to enjoy Laughs, because there are some stories repeated here.)  I should be honest—when I requested a review copy (many thanks to my Facebook compadre Jeff Abraham at Jonas PR, who slipped me the freebie) of this book I thought it was going to be a little out of my wheelhouse at Thrilling Days of Yesteryear.  I’m pleased to admit that I was stupendously wrong, for Farmer’s exhaustive history of the funny men who entertained appreciative audiences since the first Playboy Club opened in Chicago in February of 1960 is crammed with wonderful anecdotes about such comedy greats like Joe E. Lewis and Lenny Bruce, and first-hand accounts from stand-up practitioners as Professor Irwin Corey, Phyllis Diller, Tom Dreesen, Jackie Gayle, Shecky Greene, Dick Gregory, Joan Rivers, and Larry Storch.  Laughs is one of the best books I’ve read on stand-up since devouring my pal Kliph Nesteroff’s amazing The Comedians: Drunks, Thieves, Scoundrels and the History of American Comedy.

Playboy Laughs is one of those books where you want to keep a notepad nearby while reading it so you can jot down anecdotes and relay them back to like-minded friends interested in the history of laughter.  One of the anecdotes that leapt out at me concerns “The Thief of Bad Gags” himself, Milton Berle—who had a bit of a reputation of being a putz where his contemporaries were concerned.  Comedian Lou Alexander relates that when he was just starting out in the business, “Uncle Miltie” took an interest in him and his act, telling him: “I’m going to come to your show once a week and I’m going to heckle you, but before the show I’ll go to your dressing room and tell you what I’m going to say.  This way you can think of things to say back to top me.”

That’s what this great man did for me.  He came in once a week and heckled me, and I’d have all the toppers—the comebacks—and I’d kill him.  He’d put on this act: “Look at this kid, he’s got me again.”  And after a while, maybe two months, it was all over town that there’s some schmucky kid killing Milton Berle at the Interlude.  I loved him.  I loved Berle.  We became very good friends. He was a great guy, a very kind, sweet man.

Another memorable passage from the book that has a tenuous connection to a recent post here at TDOY concerns the comedic vocal group known as The Vagabonds, who certainly made their presence known in the 1946 feature film People are Funny.  I’m not quite as enthusiastic as Farmer about the aggregation (she describes their People antics as “scene-stealing”—we’ll just have to agree to disagree on this one) but she did provide me with some information with which I was not aware, in that the quartet were favorites on the nightclub circuit (they even owned and operated nightspots in Frisco and Miami) and made quite a few appearances on shows telecast during the medium’s Golden Age (The Colgate Comedy Hour, Ed Sullivan, etc.).  “With the Vagabonds, even tempo was funny,” she writes.  “Sometimes they’d go so fast they left the audience breathless; other times, they’d drag out a song at such a snail’s pace that listeners would sweat with suspense.  It was as if they were comic masters, always carefully calibrating their punch lines.  And of course, that is exactly what they were.”

Farmer’s wonderful stories about the people and personalities that either started their careers at the Playboy Clubs or benefited from those venues after already establishing themselves comprises a goodly portion of Playboy Laughs…but there are also chapters dedicated to those artists who created the cartoons that dotted the pages of the magazine.  One of particular interest to me was a nice little history on Jack Cole—which I’ll need to set up here.  I knew of Cole because I owned a copy of Jules Feiffer’s The Great Comic Book Heroes as a kid (coincidentally, Feiffer also contributed cartoons to the magazine and has some wonderful stories in Laughs) as a kid and knew Jack as the creator of Plastic Man.  My father, on the other hand, was more familiar with Cole’s post-Plastic Man career as—you guessed it—a prolific contributor to Playboy.  (I admit—my opinion of the old man gained a few points that day after finding out he used to read the mag.)  Other cartoonists discussed in the pages of Patty’s book include Doug Sneyd, Shel Silverstein, Dean Yeagle, Arnold Roth (whose work I knew from TV Guide—his stories about assisting Harvey Kurtzman and Will Elder on Little Annie Fanny are priceless), and Al Jaffee (the legendary MAD artist was a contributor, too).

Farmer does a bit of a sidetracking with histories on Playboy artists like (Alberto) Vargas and Olivia (De Berardinis); a little beyond the scope of a book on both humor and cartoons, in my opinion…but it won’t detract from your enjoyment—and it’s always nice learning about something you didn’t previously know.  As someone who actually did read Playboy for the articles (I had a subscription while I was in college—born to be mild, baby) I enjoyed Patty’s concluding take on Hugh Hefner (an informative history on the man and his pajamas) because anyone who put as much time, money, and effort to restore the Basil Rathbone-Nigel Bruce Sherlock Holmes films my mother loves to watch is aces in my book.  Classic movie fans might get a kick out of this observation of Hef in Playboy Laughs: “At ninety, he carries on the tradition he started decades ago of hosting weekly dinners followed by movies.  One night a week is set aside for a current film, another for a classic film noir, and sometimes a third is added for one of his favorite Chaplin movies.”  Gooble, gobble, one of us!