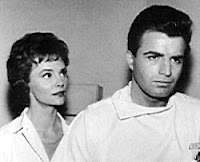 Fifty years ago on this very date, ABC telecast the other premiere television medical drama of the 1960s (I mentioned Dr. Kildare’s golden anniversary in a previous post) in Ben Casey, a series created by the talented James E. Moser, who had enjoyed a long association with TDOY god Jack Webb as one of the scribes on Dragnet.  Before Ben Casey, Moser had created another critically acclaimed medical drama in Medic (a 1954-56 series starring Richard Boone)…and in the 1970s he tried to get a hat trick going with a series called Doctors’ Hospital starring George “Banacek” Peppard as an L.A. surgeon.  (That series, unfortunately, lasted only thirteen weeks.) 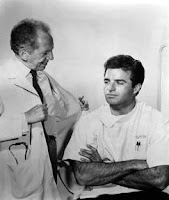 Ben Casey, on the other hand, ran five seasons from 1961 to 1966—the same amount of time Dr. James Kildare spent in televised medicine, though Kildare was an intern at Blair General while Casey plied his surgical trade at , under the mentoring eye of Dr. David Zorba (Sam Jaffe).  Casey was an example of what author Mary Ann Watson (in The Expanding Vista) called “a New Frontier character drama”—the titular character symbolized the Kennedyesque “best and the brightest,” and often went beyond just curing the ills of his patients by getting directly involved in their personal lives.  The show had a much grittier feel than Dr. Kildare, addressing timely social issues such as euthanasia, drug addiction, child abuse and racial tension. 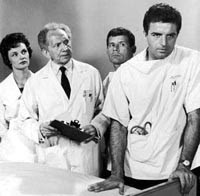 In its first two seasons on the air, Ben Casey was a Top Twenty ratings smash for ABC (it even outdrew Kildare in its second season, ranking at #7 in the Nielsens) but when the network moved the series from its 10pm berth on Monday nights (the show that replaced it was The Breaking Point, a Casey spin-off) to Wednesdays at 9pm it got its clock cleaned by CBS’ The Beverly Hillbillies and The Dick Van Dyke Show.  So it limped back to Mondays in its fourth year.  In the fifth and final season, the character of Dr. Zorba was replaced by chief surgeon Daniel Niles Freeland (Franchot Tone)…and the show started to become more Kildare-like in adopting serialized story arcs—they even got the dour Casey a love interest in Jane Hancock, a patient who had emerged from a coma and was played by Stella Stevens.  (Not that this is a bad thing.)

The show was cancelled in March of 1966, and though an attempt was made to spark interest in the series once again a couple of decades later with a reunion TV-movie, The Return of Ben Casey (1988), it was only moderately successful.  The rights to the show are reportedly owned by Paramount…but since the entire run of the series was in black-and-white—and its last major exposure on CBN in the early 1980s—chances of seeing a DVD release are between slim and none.  (A shame, to be sure—because I’ve been told by more than a few fans of the show that it’s really a top-notch drama…so to see it, consult your local bootlegger for more details.)

But if you’ve ever stayed through an episode of Hogan’s Heroes to the very end and noticed the “Bing Crosby Productions” credit…it may interest you to know that Ben Casey was Der Bingle’s other boob tube success—not that Bing was easily discouraged in this arena.  In addition to Ben and Hogan (Hey…Ben Hogan!) BCP produced The Breaking Point (the Casey spin-off mentioned earlier) and Slattery’s People, a critically acclaimed legal drama (also created by James Moser) that starred Richard “Walter Denton” Crenna.  Bing’s production studio also found time to produce a sitcom starring the company’s namesake (The Bing Crosby Show)…all three of these lastly-named shows barely made it beyond a single season.

When the title of today's post popped up on my blog list the first thing that came to mind was Rob Petrie: "Dr. Zorba, you lost all your hair!"

When I was a kid I had zero interest in those medical dramas my mom enjoyed so much. However, clips of Casey that I've come across on YouTube have certainly whetted my appetitie.

Another terrific TV land post, Ivan. I was - once upon a time, many moons ago - a diehard Ben Casey fan. Loved that show!

You didn't mention that the female co-star of the show (she played, if I remember correctly, not a nurse but a doctor) was married to Sam Jaffee. To me, it always seemed an incongruous pairing.

But what do I know?

I almost forgotten the symbols used at the beginning of the show until you used them for the title of your post!

Luckily, people will get a chance at seeing Medic on DVD in a matter of weeks, courtesy of Timeless Media Group.

Our Lady of Great Caftan admitted:

Ah, faith and begorrah 'tis a foine thing to hear, sister C.W. (I'm scheduled to do a post on the 50th anniversary of Dragnet's TV premiere in December at Eddie Copeland's.)

Thanks for prodding my memory on this one...I don't remember when we started getting GoodLife TV at the old house in Savannah but if the 'rents were getting it in that time frame of the early 90s, I was living in Morgantown, WV. (I still call it "GoodLife" no matter how many times it changes its name, or "the place where reruns go to die.")

And last but not least, Yvette:

You didn't mention that the female co-star of the show (she played, if I remember correctly, not a nurse but a doctor) was married to Sam Jaffee

And the reason was, as Johnny Carson used to say, "I did not know that!" So thanks for the trivia!

I used to think Ben Casey the character was so intense and scowling all the time -- not like that nice Dr. Kildare who was so cute. As a very young girl I loved Kildare but didn't watch Casey, though I did in later in replays when I was still a kid. "Ben Casey" the series was in the tradition of thoughtful medical movies like "The Interns" and "Dr. Kildare" was like the soap opera equivalent though it was still very good. It wasn't the show's fault that everybody fell in love with Richard Chamberlain! MGM had used Kildare as movie fodder for years, not exactly cutting-edge drama, but "Ben Casey" was about as true-to-life and gripping as television drama got!

Thanks for this great look-back. I hope to be able to find and watch these shows somewhere again!