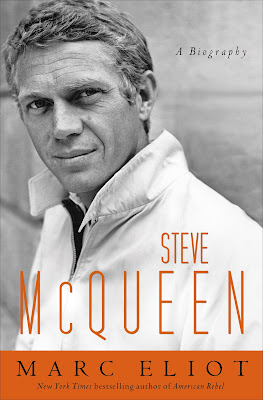 Since the last time I gave away any free swag here on the blog was back in April, I figured it was high time that I grant the Thrilling Days of Yesteryear faithful the opportunity to get in on a little literary largess courtesy of Christina Foxley and Crown/Random House.  Crown has just released Marc Eliot’s Steve McQueen: A Biography, a hardcover tome about the life of the actor, known for such films as The Sand Pebbles, The Reivers and The Getaway…and of course, the classic TV oater Wanted: Dead or Alive.
Steve McQueen remains one of ’s legendary movie stars.  Known for his anti-hero persona in now-classics such as The Magnificent Seven, The Great Escape, The Thomas Crown Affair, and Bullitt, McQueen was one of the top box-office draws of the 1960s and 70s.  His unforgettable physical beauty, his soft-spoken manner, his tough but tender roughness and his aching vulnerability had women swooning and men wanting to be like him. In 1974 he became the highest-paid movie star in the world. Although McQueen was combative with directors and producers, his popularity put him in high demand in and enabled him to command exorbitant salaries. He was wild and rebellious and “the King of Cool.” Yet few know the truth of what bubbled beneath his cool exterior and shaped his career, his passions, and his private life.
Now, in  STEVE McQUEEN: A Biography  (Crown Archetype; On Sale October 25, 2011; Hardcover), New York Times bestselling author, acclaimed biographer and film historian, Marc Eliot brilliantly captures the complexity of this Hollywood screen legend by examining the intertwining arcs of his complex life and his fascinating career in film. Filled with original material, rare photos, and new interviews with McQueen’s publicist and long time friend, David Foster, and McQueen’s manager, Hilly Ekins,  STEVE McQUEEN: A Biography breaks new boundaries in the understanding of the life and the work of Steve McQueen, providing a full portrait of the “King of Cool,” including:
• A complete reassessment of McQueen's films and early television work.
• McQueen’s tumultuous life both on and off the screen, from his hardscrabble childhood to his rise to superstar status.
• McQueen’s struggles with alcohol and drugs, and his obsession with racing fast cars and motorcycles.
• His obsession with Paul Newman and how it shaped his career
• The intimate details of McQueen’s passionate yet failed marriages to Neile Adams and Ali MacGraw as well as his numerous affairs.
• McQueen’s eternal search for his real father and his uneasy relationship with his mother.
• Inside information behind his incredible yet often perplexing career that ranged from great films to embarrassing misfires.
With meticulous detail, Eliot redraws the landscape of McQueen's life from a filmmaker’s perspective, making this book at once a revisionist look at McQueen's life, as well as the world and business of making movies that McQueen toiled in up to  and until his untimely death at the age of 50.  STEVE McQUEEN is the first fully comprehensive biography of Steve McQueen. 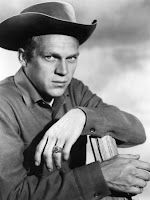 Thanks to the generosity of Christina and the folks at Crown, I have two copies of this book to give away…and if you’re interested in entering for a chance to score a copy, simply shoot me an e-mail at igsjrotr(at)gmail(dot)com (with “Steve McQueen Giveaway” in the subject header) with your name and snail mail address, and you’ll be good to go.  Now, if you’re squeamish about my having access to this address before you’ve actually won anything (I would like to say that those stories of my selling people’s addresses to companies for DVD money has been completely blown out of proportion), you can certainly leave that out until you get confirmation—and the winners will be notified on the morning of November 3rd (next Thursday) when I pick two names via Random.org.  This book would make a splendid gift for any classic movie fan on your Christmas list…or if they’ve been particularly naughty this year you can put it on your own shelf while they try to figure out who put all that coal in their stocking.  So be sure to enter today and keep an eye peeled for future free swag at Thrilling Days of Yesteryear, where the winning tradition continues!