Passing the hat around (again)

Before I mention a few upcoming classic TV-on-DVD releases that have been announced within the last week or so, I wanted to take just a couple of seconds to hit the TDOY faithful up for a little scratch as part of Sam Nelson’s project at Kickstarter.com to raise the necessary funds for restoration of his grandparents’ landmark TV sitcom, The Adventures of Ozzie and Harriet.  The series, a boob tube adaptation of their popular radio series (which began in 1944), was the longest running live-action sitcom in American TV history, an audience favorite from 1952 to 1966 and churning out a staggering 435 episodes…quite a few adventures there, to be sure.  Sam, the son of Ricky Nelson, has access to the negatives of these shows and would love to transfer and digitize all of them in order to make the entire run of the series available to the fans.  The price tag on this project is $55,000, which he hopes to raise (or come as close as he can) by November 3—and the great thing about Kickstarter is even if you just happen to have some change lying on top of a dresser somewhere that’s more than enough to donate to the cause.
Sam was nice enough to send me an e-mail message thanking me for mentioning the project here at TDOY and as of this writing there’s $22,130 in the Nelsons’ kitty...with a little more than two weeks left to obtain a little more fundage, so anything you can do would be most appreciated.  If I could, I’d hand out a tote bag to everyone who throws some money in the pot…just let me say that if you’ve already parted with some wherewithal or are planning to do so, I personally offer you a hearty handclasp: 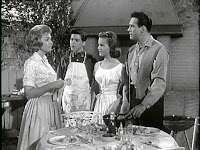 I’ve got a couple of updates on a pair of TV-on-DVD sets that I mentioned the last time I did one of these round-ups; TVShowsOnDVD.com reports that MPI Home Video’s upcoming December 20 release of The Donna Reed Show: Season 4 (The Lost Episodes!) will contain all 39 episodes from the sitcom’s fourth year…and that those outings will be unedited and digitally remastered, so…yay Stone family!  These episodes will also include the hit records recorded by stars Shelley Fabares (Johnny Angel)…
…and Paul Peterson (She Can’t Find Her Keys)…
…plus a guest hit from James Darren, Goodbye Cruel World.

The other update involves the January 24th release of Underdog: The Complete Collector’s Edition—which (and this will no doubt come as reassuring news to the “Vinnie” half of TeamBart) will be as close as an approximation to the original Underdog series (Shout! Factory will not be using the syndicated masters, which contained some replacement music) including the Go-Go Gophers, Klondike Kat and The World of Commander McBragg segments included with the canine superhero.  (As for Tennessee and Chumley—their segments may have been showcased on the Underdog series at one time, but they weren’t technically part of the original show because they had their own showcase, Tennessee Tuxedo and His Tales, which premiered about a year before Underdog.)  Great news to hear that the Factory is going to put some special care into this set, even though the individuals who invested in the original releases have cause for a redress of grievances. 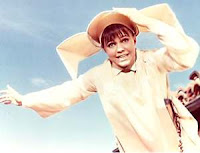 In the Underdog update, TSOD’s David Lambert calls Shout! Factory “the kings of TV-DVD nostalgia”…and with this blurb reveals that the Factory has picked up the rights to several TV series that were victims of “one-and-done” at Sony Pictures Home Entertainment.  The second and final season of Here Come the Brides is scheduled to be released sometime in 2012 (its first season hit the streets in 2006), not to mention second seasons on tap for S.W.A.T. (first released in 2003), Police Woman (2006) and The Rookies (2007).  Once again, kudos to SF for stepping up to the plate though I’m not quite ready to coronate them as TV-on-DVD monarchs—when the third season of the ClassicBecky-despised The Flying Nun gets a release, then we’ll talk.

Besides, there’s a contender for the throne in Timeless Home Video, who’s announced a couple of rarities straight from the NBC-Universal vaults that are headed for DVD.  Bing Crosby may have asked if we’d like to swing on a star in the 1944 Oscar winner Going My Way, but it was actor-singer-hoofer (and Pam favorite) Gene Kelly who played the part of Father O’Malley on a short-lived comedy-drama on ABC-TV during the 1962-63 season.  Before he was telling Robert Vaughn and David McCallum to “open channel D” Leo G. Carroll was Father Fitzgibbon (the role played in the film by Academy Award-winner Barry Fitzgerald) in this series and Dick York essayed the role of O’Malley’s boyhood chum (and now youth center supervisor) Tom Colwell.  All thirty episodes of this series will be released in an 8-DVD set on December 6th with a SRP of $49.98.

For their other television rarity release, Timeless will reintroduce a classic oater that ran on NBC from 1960-62 and starred veteran rat bastard Barry Sullivan as sheriff Pat Garrett plus future Virginian co-star Clu Gulager as William H. Bonney…better known as “Billy the Kid.”  The Tall Man (the title of the show refers to Garrett) has already seen DVD action before (Timeless released a “best of” collection in 2007) but this 8-DVD set also due out December 6 is the full enchilada; all 75 episodes in a set that has also a SRP of $49.98.  I’ve only seen one episode of this series (the first season outing “Bad Company” is available on Timeless’ Classic TV Westerns Collection set) but I remember being entertained by it, and since I am a sucker for relatively obscure TV series I might have to find a way to pick this one up when it comes out.

Another NBC-Universal property that will see a DVD release soon (though not through Timeless; Universal Home Entertainment will do the heavy lifting on this one) is Alfred Hitchcock Presents.  It’s been over two years since we last saw a DVD collection of the this show (the fourth season came out in 2009) so it’s nice that the company will release the fifth season of the anthology classic on January 3rd.  Thirty-eight episodes will be made available on a 5-DVD set that will retail for $39.98…another collection I will have to make an investment in.

And for you soap opera fans in the TDOY audience, you might want to keep an eye peeled for an unusual collection that’s slated for release…as a matter of fact, you can put your order in right now.  In conjunction with Procter & Gamble (though the set is produced by Broadway Video), a 4-DVD set entitled As the World Turns – 20 Classic Episodes may be purchased at SoapClassics.com for the direct-sale web tariff of $19.95 (plus shipping and tax).  Kind of a novel way to allow ATWT fans a chance to collect some shows from the long-running daytime weepie, particularly since season-by-season sets would be a nightmare (the series was on TV for fifty-four years…and if CBS-Paramount were handling something like this, with their propensity for split-season sets you’d see the last of them released just about time the Four Horsemen of the Apocalypse came galloping into view)…but I can’t help but wonder whatever happened to Shout! Factory’s intention to release in its entirety on DVD (I bought the first two sets; you can’t say I didn’t do my part), a project of equally epic proportions.

Oh my goodness, I think I see Steve and Betsy on one of those ATWT DVDs! The show was always on at our house, mom loved Y&R, ATWT and GL. Later, she grudgingly tolerated the new one added to the lineup, The Bold and the Beautiful IIRC.

The Wikipedia entry on Steve and Betsy is HILARIOUS.

Ivan,
Thanks for the info. If the project accepts paypal I'll be happy to donate to get Ozzie restored. : )

The Tall Man DVD collection sounds like the perfect Christmas gift for my dad to add to his vast Western collection. Thanks for the heads up on that.
Page

The show was always on at our house, mom loved Y&R, ATWT and GL. Later, she grudgingly tolerated the new one added to the lineup, The Bold and the Beautiful IIRC.

CBS ruled the roost with soap operas in our house, too -- I think Mom stopped watching them about the time The Bold and the Beautiful debuted (though sister Debbie kept her updated on what was going on); the soap opera that was her bete noire was Capitol.

And to this day, anytime we see Scott Bryce in anything we cannot disassociate him from ATWT. Mom and I caught him in a Law and Order: SVU episode a year or two ago and she yelled out: "It's that weasel Craig Montgomery!"

There's no need to fear, Underdog is here!

I will definitely be getting my hands on the DVDs. I simply can't pass this up. Hopefully they will not cost the earth. :)