“…we’ve got to skedaddle on out of here…” 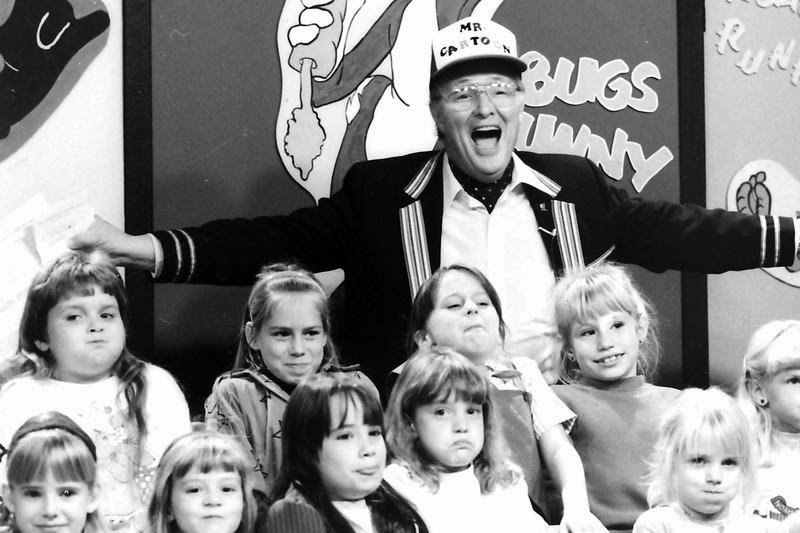 Back in February of 2011, I did a write-up on an installment of PBS’ Pioneers of Television series entitled “Local Kids’ TV”; it was a very entertaining hour that discussed those shows produced by local TV stations…that admittedly did very little but hawk toys and Sugar-Coated Frosted Bombs to the younger set in order to help those stations’ bottom line.  (And that’s the way we liked it, if I may comment in my old man voice.)  Oh, sure—you had souls who worked for a higher educational purpose, like Fred Rogers and Jim Henson, but most of them had very little aspiration beyond just entertaining the heck out of kids (see The Wallace and Ladmo Show).  Then Boston housewife Peggy Charen and her organization ACT (Action for Children’s Television) came along and spoiled a good time for everyone else, and that’s why afternoon TV is clogged with crap like The Dr. Oz Show and 2,000 individuals clad in judicial robes.

I then diverged in the post about one of my childhood heroes: Mr. Cartoon, the king of kiddie TV from 4 to 5pm, who taught me the four magic words (“Please,” “Thank you,” “You’re welcome” and “Excuse me”) but mostly just aired cartoons out the wazoo, inspiring in me a love of animation and classic movies in general.  The man cast as Monsieur Cartoon was Jule Huffman, a singer-announcer who doubled as WSAZ-TV’s (Huntington, WV) weatherman when the grown-ups’ show was on.  Huffman was not the first guy to play Mr. Cartoon (that honor went to a man named George Lewis) but he definitely donned the loud sportscoat, fedora and sunglasses the longest—for twenty-five years, he was a role model for those kids in the Huntington-Charleston-TriState viewing area.

Jule Huffman passed away at the age of 91 today.  Hearing the news of his death on Facebook filled me with a tremendous sadness, because I did think highly of him when I was a kidlet (even though I probably turned out differently than most of the kids in the Kartooners’ Korner—twisted and evil) and not only do I regret never getting the opportunity to be on his show (you can read all about that in the post) I lament the fact that I never took the time to perhaps put pen to paper and let him know that I was grateful for all the joy and fun he brought to me and the others who watched him every day Monday through Friday.  Huffman was more than just a TV personality; he worked tirelessly for charitable causes and insisted on maintaining professionalism and respectability both in his career and his church.

Yes, I had the same feelings when Wallace of 'Wallace and Ladmo' passed away recently. I blogged about that show once:

Vanwall burst through the door with horrible news:

Yes, I had the same feelings when Wallace of 'Wallace and Ladmo' passed away recently.

Aw, sh*t...I hadn't heard about that, Vanwall. And you were one lucky essobee, I saw some of the Wallace and Ladmo footage on that Pioneers doc and it had me on the floor. (Friend of the blog Richard M. Roberts was responsible for hunting down a goodly portion of those clips.)

You have my condolences. I know how much the host of kid's shows can mean to one even as an adult. I grew up with Showtime on KRCG, where the host that I remember is Bill Ratliff (he must have been one of the few kid's show hosts to use his real name). I know I will be demolished when he passes. Oh, and I did get to be on Showtime once, but I barely remember (they were doing a remote at one of the malls and I was like 4 years old at the time).

Lovely tribute. I also recall with great fondness the local kids' TV hosts in my area and marvel at how big an impact all that gentle silliness had on us. Condolences to all of Mr. Cartoon's fans.

For me here in Indianapolis it was Janie and Cowboy Bob who had the live cartoon shows with audiences. I heard later that Janie was a drunk and Cowboy Bob really had shoulder-length hair under his 10-gallon hat. Urban legends or truth? We'll never really know!

For me, it was guys like Marshall the marshall, Howie Olson and Cowboy Eddie, and Dusty from Dusty's Cactus Club (ah, Thunderbirds and Ruff and Ready at lunchtime.)