Do you remember these? 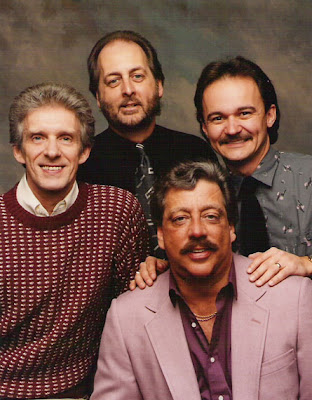 Don Reid, the lead singer for the country music group The Statler Brothers (Don’s the bearded one, the others are brother Harold Reid [the bass singer], Phil Balsley [baritone] and Jimmy Fortune [tenor]) turns 65 today—and as a longtime Statler fan, I’m pleased to present him in today’s Thrilling Days of Yesteryear birthday spotlight. Sadly, the brothers Statler (for the uninformed, the “Statler” moniker came from a brand name of facial tissue) retired in 2002 (though Fortune is still in the music bidness with a solo career)…and the odds of hearing any of their songs on the radio nowadays are slim and none. (By the way—don’t tell my Mom about this post…if she found out I put up a picture of the Statlers without Lew Dewitt [the former tenor who passed away in 1990] she’d write out me out of the will faster than you can sing Do You Know You are My Sunshine?)

I’ve mentioned this on the blog in the past, but I’ve often speculated that my love for old movies and other areas of nostalgia just may have very well been influenced by several of the Statler Brothers’ songs; notably Whatever Happened to Randolph Scott, a tribute to the great B-western heroes of the past (the Statlers were huge fans of these films, often watching videotapes on their bus to pass the time while touring), and Do You Remember These—the lyrics of which I published in this post from 2008, when the group was inducted into the Country Music Hall of Fame. Several other Statler Brothers hits—Pictures, The Class of ’57, Silver Medals and Sweet Memories, You Can’t Go Home, Carry Me Back, Susan When She Tried, How to Be a Country Star, The Official Historian on Shirley Jean Berrell—all worked a similar theme of a wistful longing for the past when things were simpler and not quite complicated, to borrow a lyric from one of their tunes.

I was about fourteen years old when the Statler Brothers took a tune called The Movies to the country Top Ten in 1977, and to this day I often find myself humming it when I’m preoccupied with writing or goofing around on the computer. Written by Lew Dewitt, it’s a celebration of those wonderful flickering silver screen images that have been a passion of mine since I stared in amazement at a forty-foot ape atop the so long ago. Through the magic of YouTube (though the person who transcribed these lyrics messed up a few times), I present Harold, Don, Phil and Lew—the Statler Brothers:

I know that you and I were both fans of the Statlers while we were at Marshall. I startedd DJing in 1979 and they were still riding high on the charts. Probably the two biggest songs out then were "Don't Wait On Me" and the Jimmy Fortune written "Elizabeth." But I agree with you about their songs being so full of memories and history. "The Class of 57", "Do You Remember These", and "Whatever Happened to Randolph Scott" being the best among them. I would argue that their biggest hit after "Flowers On The Wall" was "I'll Go To My Grave Loving You" but "Do You Know You Are My Sunshine" probably wins that title. I later became a bigger fan of the Oak Ridge Boys than the Statlers. The Statler's run as the CMA's Vocal Group Of The Year ran uninterrupted from 1972 through 1980. Johnny Cash was so important to their career and they sing backup for him on "Daddy Sang Bass/Will The CIrcle Be Unbroken?"

The Statler Brothers was one of the first concerts I ever attended. I believe that my first actual concert was Dr. Hook opening for Sha Na Na, but the Statlers may have been my first. I know the modern era of concert going started for me when they remodeled the Charleston Civic Center. The first two concerts thee were the Oak Ridge Boys (on Friday night) and Queen (on Saturday!) I also saw Larry Gatlin and Kenny Rogers in concert together in Charleston.

One of my favorite groups. What a great harmony sound those guys had!

Among many other things I like to collect are album covers with tour buses on the front.

One of the covers in my collection includes The Statlers: "Lester Moran & The Cadillac Cowboys Live At The Johnny Mack Brown High School" (what a great tour bus(?) on this one!)

I know you're aware of it, but I'll put a link below for anyone else that might like to check it out.

I know that you and I were both fans of the Statlers while we were at Marshall. I startedd DJing in 1979 and they were still riding high on the charts.

The Statler Brothers was one of the first concerts I ever attended.

I didn't get to see the Statlers until 1985, when they came to Savannah with Helen Cornelius. I took my Mom to see them, and while she was disappointed that Lew Dewitt was no longer with the group she had a pretty good time. My first concert was in 1981 (when I was at Marshall) where I saw Reba McEntire, Johnny Lee, T.G. Sheppard and Mickey Gilley in something called "The Urban Cowboy Tour" -- what a hell of a show! (Huntington is where I also saw George Jones perform...with one of my favorite artists, Earl Thomas Conley.)

And my pal B brought up this wonderful memory:

One of the covers in my collection includes The Statlers: "Lester Moran & The Cadillac Cowboys Live At The Johnny Mack Brown High School" (what a great tour bus(?) on this one!)

Thanks for the link to this, B (we should point out that the album title is Alive at the Johnny Mack Brown High School) -- I haven't heard that album in ages... ("Mighty fine, mighty fine...")

I especially loved their song "Elizabeth." Their "Christmas Card" album has been a family favorite since I was a teenager. The songs "I Never Spend a Christmas That I Don't Think of You," "Christmas to Me" and "The Carols Those Kids Used to Sing" all have a great nostalgic WALTONS-y feel. Thanks for a great look back.

I have fond memories of watching The Statler Brothers with my mother many years ago. One of my favorites was "Flowers On The Wall" and sometimes out of the blue this favorite becomes an "earworm" for me.

BTW...after seeing his comment, I told my husband, "B", that the correct title was "Alive at the Johnny Mack Brown High School" but he said, "What's done is done."

"The Movies" was one of my favorite Statler numbers, but to me nothing tops "Flowers on the Wall". Eric Heatherly did a solo version of "Flowers" just a few years ago, but hasn't been heard from since. Serviceable cover, but it just wasn't the same as the original.

"The Movies" was one of my favorite Statler numbers, but to me nothing tops "Flowers on the Wall".

Peter Nellhaus remarked on this via Facebook: "Not to mention how much mileage one country group can get with the mention of Captain Kangaroo."

Eric Heatherly did a solo version of "Flowers" just a few years ago, but hasn't been heard from since. Serviceable cover, but it just wasn't the same as the original.

I'm in complete agreement, hob--I don't think anyone can match Lew Dewitt's vocals. Still, I liked Heatherly's version...the drums in the intro were the strongest part, I always thought.