We’ll go to our grave loving you 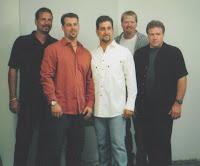 My Facebook compadre and fellow Ravenswood High Penitentiary inmate Forrest Poston (whose website is called Philosophy and Nonsense) saw my Don Reid tribute via Networked Blogs this morning and sent me a heads-up to this video—a wonderful tune entitled The Statler Brothers Song. The recording artists are a group known as Grandstaff Wilson Fairchild, and two of the members of this musical aggregation are cousins Wil and Langdon Reid, the sons of Statler Brothers brothers Don and Harold Reid. I wanted to post this because the song is really first-rate—it employs a lot of the titles of Statler hits in the lyrics, and I thought fellow fans would get a kick out of it.

Addendum: I received another message from Forrest about an hour ago informing that the band has since changed their name to Wilson Fairchild. Oh, and he also wanted me to shill for his other website, Gin-For Odditiques (or as he put it, "while we're doing commercials.") (I don’t want to do this, but he does have a cassette tape of me singing in the RHS version of the Our Miss Brooks musical—my hands are pretty much tied.)