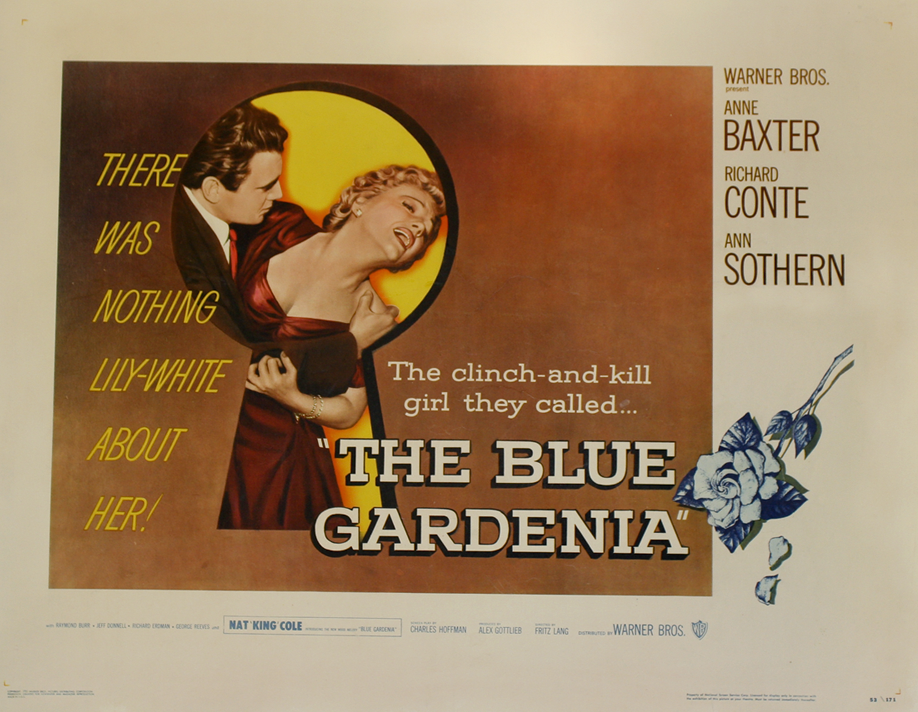 During a brief respite from the drudgery we call modern life, I had the opportunity to enjoy a few days of The Greatest Cable Channel Known to Mankind™, and stumbled across an enjoyable crime drama entitled The Blue Gardenia (1953). I suspect the title may have been inspired by the infamous Black Dahlia murder a few years prior, but having missed the first few minutes, I could be wrong. 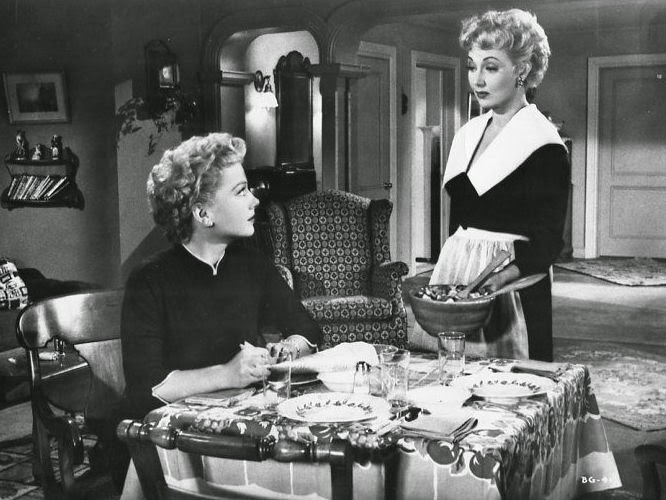 Anne Baxter plays Norah Larkin, a young woman in love. Unfortunately, her beau is half a world away, serving in the military. But that doesn’t keep her from preparing a candle-lit dinner and creating an atmosphere of romance to enjoy his latest letter. When two people are in love, distance means nothing.

Or does it? Because no sooner does she open his latest missive than it becomes clear it’s a Dear Jane letter. It seems while serving in Korea he’s met a lovely young nurse and they’re due to be married (“Seoul mates” – there, I said it).

Shattered and emotional, she is vulnerable to a phone call from Harry Prebble (Raymond Burr), whom we later discover is a scoundrel of the first order. In a case of mistaken identity, he invites Norah out. She quickly abandons her dinner and heads off to the Blue Gardenia Club, where she meets Harry who immediately begins wooing her with its trademark corsage and a barrage of Polynesian pearl divers (the drinks, not the actual divers themselves).

Waiter: He's a fancy man with the ladies, that Mister Prebble.
Mayo: You jealous, Joe?
Joe the Bartender: Oh no, no...I fancy men myself. 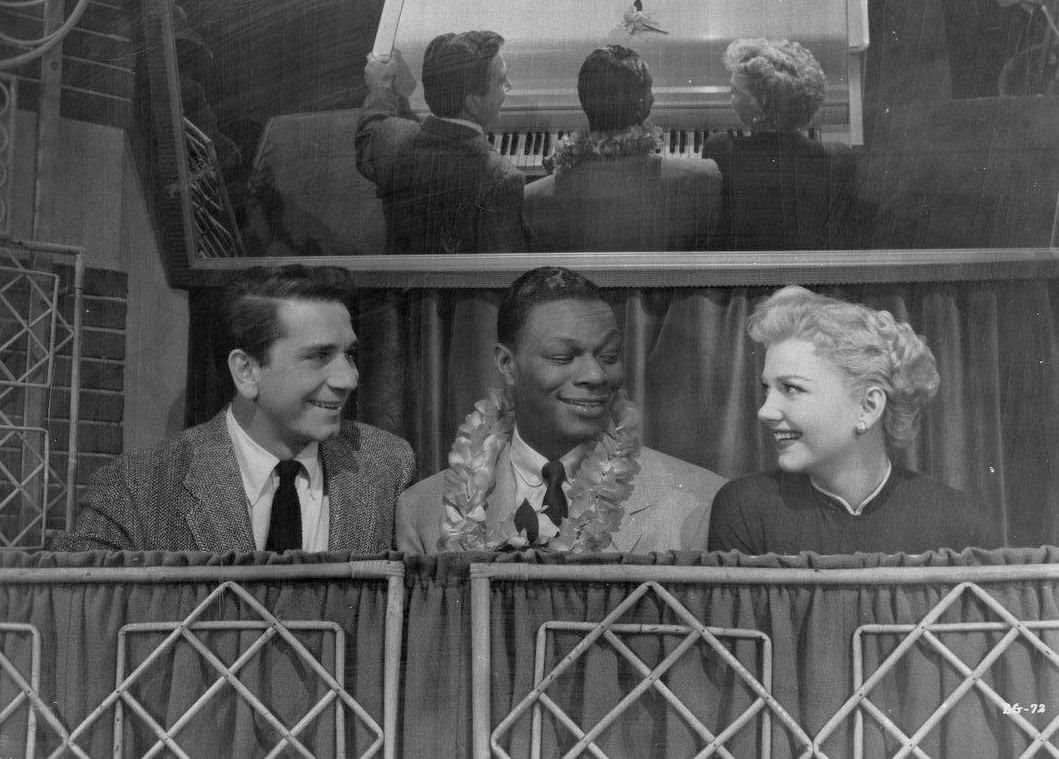 WHA-? It’s 1953. At the height of the Red Scare, I suppose certain other segments of society could let their hair down a little.

Performing a bit of fortuitous music is Nat King Cole, singing “Blue Gardenia” at the Blue Gardenia. This song later comes into play (no pun intended), when Prebble puts on the record in an attempt to seduce Norah back at his place. Believe it or don’t, he’s an artist, with plenty of cheesecake art decorating his bachelor pad (because nothing gets a girl’s engine revving like pictures of beautiful women). Prebble makes his new girl one last drink; he may have called it a rum roofie – or not. 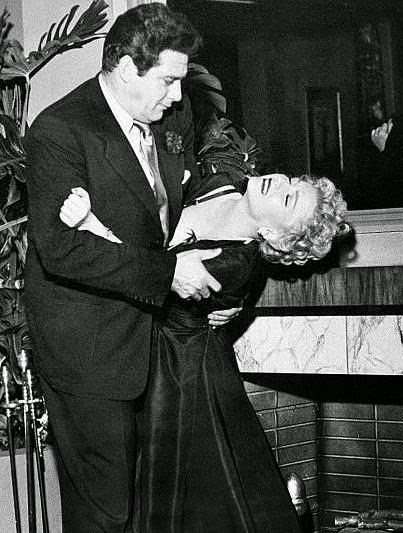 Drunk, drugged and dazed, Norah is forced to fend off Prebble’s advances. Her head swimming, she draws the poker from the hearth, steps up to the plate and swings like Babe Ruth, shattering the mirror over the fireplace, only to collapse in a heap on the floor.

She comes to a short time later. Prebble is lying on the floor nearby, an ugly gash in his forehead. “I’m going to need a good defense attorney,” she says to herself. “Better call Perry Ma – Oh, that’s right.” Still confused, she pulls on her coat and heads out the door, leaving her shoes behind. The next day, she wakes in her bed, uncertain how she got home.

Prebble isn’t so lucky. He’s dead, his skull caved in by the fireplace poker. On the scene is newspaperman Casey Mayo and the police. Leading the forces of truth, justice and the American way is none other than George Reeves, with a cheesy mustache to conceal his true identity (Hey, if a pair of glasses will work, why not a mustache?)

Capt. Sam Haynes (Reeves) plays Inspector Henderson to Casey Mayo’s Clark Kent, and together they have only a handful of clues: A pair of women’s shoes, size 8C, a fragment of black taffeta, a blue gardenia corsage, and a record playing over and over. Immediately, they suspect one of his many girlfriends done him in and begin asking questions at his favorite haunts. 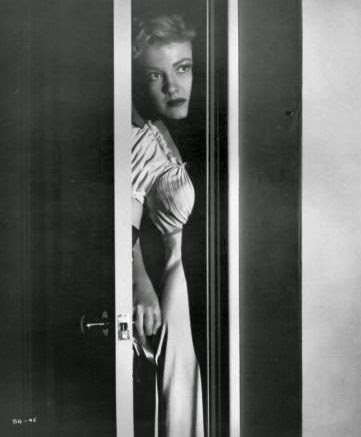 When Norah reports to her job as a telephone operator the next morning, she discovers many of her co-workers are being questioned by the police. Apparently Prebble prowled the phone company employees in search of vict – er, models. One inadvertently breaks the mirror in her compact, prompting a dim recollection of the shattered mirror the night before.

When her co-worker returns, Norah is told they’re not supposed to talk about it, and then proceeds to explain that Harry Prebble was murdered and the police are questioning his girls for leads. But she’s not supposed to talk about it. Norah is stunned, and pieces the events of the night before together. Convinced she’s responsible for Prebble’s death, she burns her taffeta dress, flies off the handle at her roommates, and generally acts in crazy fear for her life.

Mayo, meanwhile, takes a bit of sympathetic approach in his column. Even when offered a free pass to cover the next H-bomb test, Mayo wants to stick with the Prebble investigation. Knowing Prebble for the D-bag that he was, he pleads publicly for the Blue Gardenia – as the murderess has been dubbed by the press – to turn herself in. In exchange for her exclusive story, his paper will provide the best legal defense available.

Sticking close to his phone through the night, he fields several phone calls from various nutcases with dreams of notoriety. One the REAL Blue Gardenia can tell him the size shoes found at the scene. Even Capt. Haynes gets in one the act, claiming Mayo is interfering with an investigation. Nevertheless, in a moment of despair, Norah calls and provides that key to her authenticity. 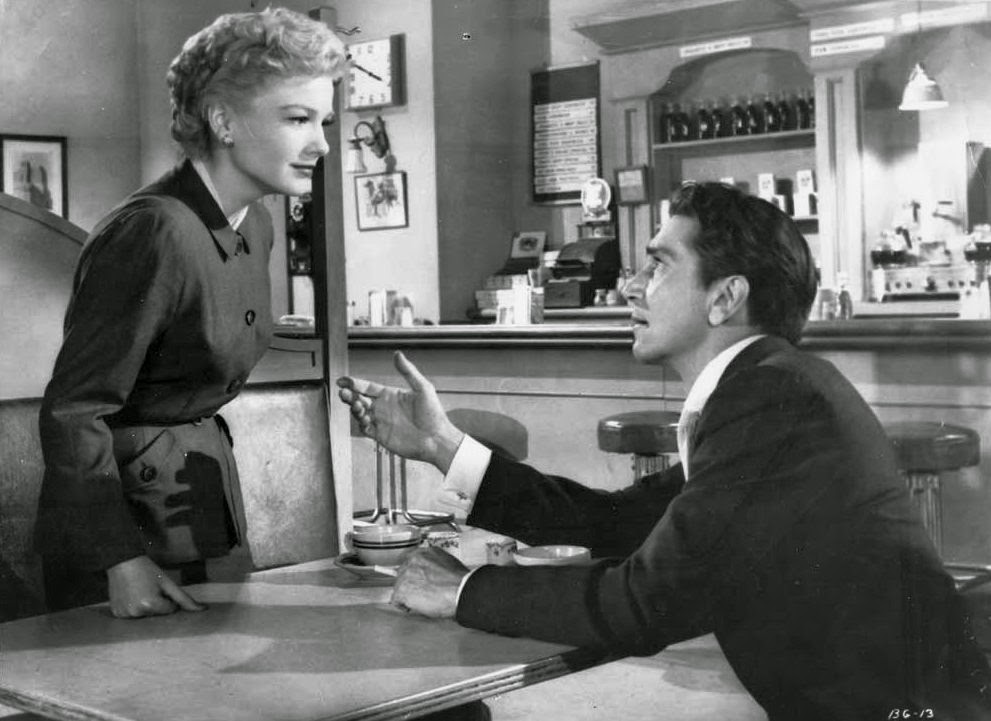 She agrees to meet Mayo at an all-night diner, where she tells all she knows about her “friend” who may have killed Prebble. She completely charms Mayo, who’s so infatuated he can’t see that she’s probably the killer they’ve been looking for. She’s a sweet kid who couldn’t possibly have murdered Prebble.

The next day, greatly relieved after her chat with Mayo, Norah apologizes to her roommate Crystal (Ann Sothern) for her behavior. Crystal is more than understanding. She’s noticed Norah’s black taffeta dress is missing, along with her shoes. She agrees to go with Norah to meet Mayo.

When Mayo meets Crystal back at the diner, his first thought is she’s hard-bitten enough to have whacked Prebble, and is dismayed to see Crystal point him in Norah’s direction. But unfortunately for all concerned it’s a trap. Waiting outside is Capt. Haynes and the rest of the force. It’s only after she’s been escorted to the squad cars outside that we see Haynes credit the diner’s operator as the person who led to her capture. 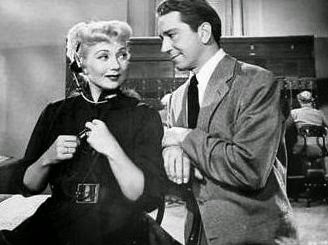 While Norah suffers in the hoosegow, Mayo is convinced more than ever she’s innocent (plus he wants to convince her he wasn’t the one who ratted her out). He spearheads a fresh investigation, leading to conflicting statements that as to what song was playing when Prebble got his. Norah says it was Nat King Cole’s “Blue Gardenia,” but it was a classical piece that was on his Close ‘n Play when the cleaning lady found him.

Mayo is able to drag Haynes along on following up this flimsy clue, leading them to the music store where Prebble bought his tools of seduction. When the manager tells his shop girl the police want a word, she heads into the bathroom, where she shatters and ashtray and…

Cut to Norah being escorted by the prison matron to the bedside of said shop girl, who is in the midst of confessing that she paid Prebble a visit that night. Thinking she was there for another taste of Harry Prebble, he switched records. But she’s hoping he will help her with “her problem.” Harry loses interest quicker than you can say Roe v. Wade, focusing instead on an unfinished painting. She begins to notice the various clues that he’s not the first female he’s had in his place that night. Red-hot in anger, she uses the poker to bash his brains in. 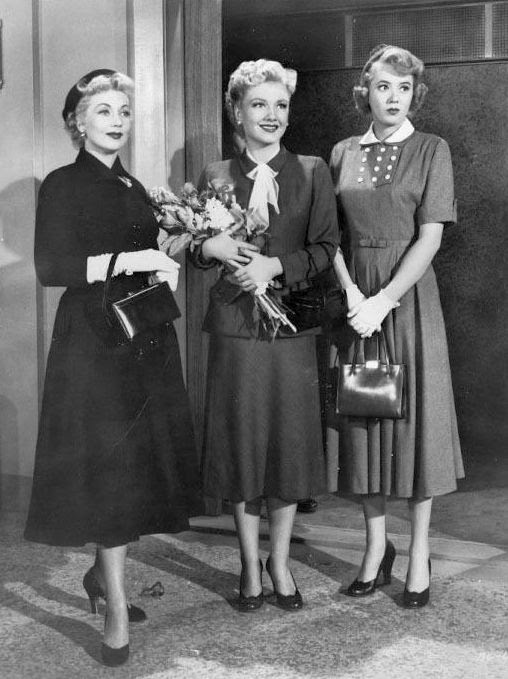 Norah is next seen leaving police headquarters a free woman, a bouquet of flowers in hand (I don’t recall the bouquet being among her personal effects when she went in stir, but I could be wrong). Mayo is on-hand, clearly hoping to kindle a romance with the former accused murderess. And under her roommate’s tutelage, she is quick to give him the cold shoulder – but not too quick.

It’s a pleasant little piece of crime drama, written by Vera Caspary, so perhaps the female point of view is more legit than most film noirs of the era. More notable is its director, Fritz Lang. Despite Lang’s reputation among film fans, many who worked with him found him abusive and difficult. Because of this, his career in America never reached the critical success of his earlier, more artistic films. 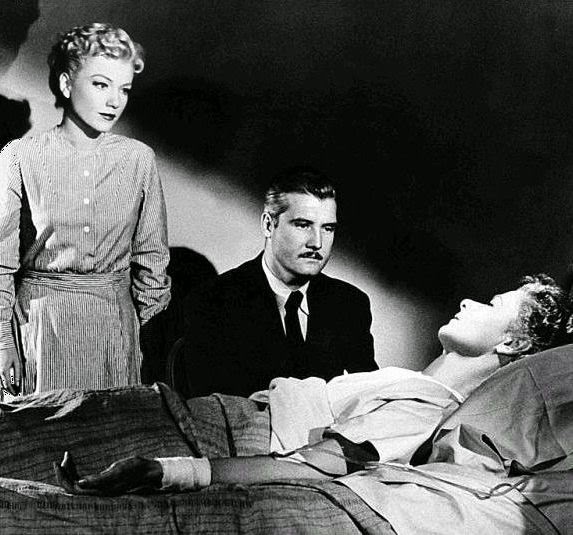 And speaking of Metropolis, it should be noted Blue Gardenia was one of George Reeve’s final film roles before he became perpetually identified as TV’s Man of Steel. The Adventures of Superman was produced independently by Superman Inc., a subsidiary of National Comics (later known as DC Comics). The producers owned the show lock, stock and barrel, and did everything it could to keep the cast under a tight rein. There was a clause in the actors’ contracts that prevented them from taking roles that would last more than 30 days. This was a means of keeping the actors from ever cultivating more promising careers, and thereby denying them any leverage they could use against the show’s producers.

Reeves had an uncredited appearance in 1953’s From Here to Eternity, and a small part in Forever Female the same year. Otherwise, he played Superman almost until the day he died.
Posted by Ivan G Shreve Jr at 7:00 AM

What a great review! I want to watch it right now, and I'm not a Baxter fan:) Leah