“Loo-see…you got some ‘splainin’ to do…” 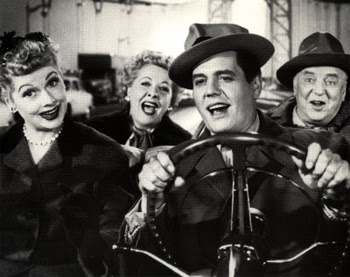 Sixty years ago on this date on a Monday evening, the granddaddy of television sitcoms premiered over CBS—though many in the industry didn’t think the series would amount to anything other than capitalizing on Lucille Ball’s radio success in My Favorite Husband.  Sitcoms were certainly nothing new to TV by that time—you had a lot of radio-to-boob tube transplants like The Life of Riley, The Aldrich Family, The Goldbergs, Beulah, Burns & Allen, etc.—but I Love Lucy ushered in what we now recognize as the popular TV form today.  It established so many of the basic concepts—studio audiences, three-camera set-ups, etc.—and broke ground in other areas: for example, Lucy and husband Desi Arnaz’s insistence that they film the series essentially created what couch potatoes like myself revere as “the rerun.”  (The Arnazes, because they took a pay cut to cover the expense of filming I Love Lucy but insisted on ownership of the series as compensation, made out like bandits when went into syndication.) 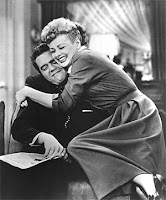 You can find more about this landmark series over at Edward Copeland on Film…and More, but I wanted to eat up a little bit of bandwidth over here to sort of come clean and admit that I’ve really been wrong about I Love Lucy in the past.  I think because of its popularity and revered place in TV history I’ve always had a tendency to kind of dismiss it and run it down, the way some critics are prone to do when they are helpless to do anything about the love people have for a show except treat it with contempt and disdain.  A lot of my friends feel the same way; if I had a nickel for everyone who’s ever said to me “I never liked that show but I always thought Desi Arnaz (or William Frawley, depending on who I’m talking to) was funny” I’d be living the high life in retirement right now.  The show’s exposure on The Hallmark Channel, Me-TV and other outlets has allowed me to revisit some of those old reruns (I did a lot of Lucy watching during the centennial celebration of Lucille Ball) and I’d be lying if I didn’t admit that I laugh at just about everybody and everything on that show.  There’s a reason why I Love Lucy is treasured and why it still runs on TV like tap water—it’s timeless comedy, pure and simple. 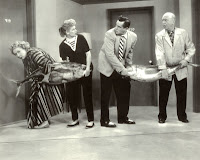 When TV Guide put together its list of 50 Best Shows of All Time in 2002, there was a rather spirited debate among the staff at the magazine (according to critic Matt Roush) over which series should take the top spot, Lucy or Seinfeld (which ultimately came out as Numero Uno).  Had it been my decision, I would have given I Love Lucy the tap because Jerry Seinfeld once remarked on an episode of that self-titled sitcom that he had never seen an episode of Lucy, something to which I have always called “shenanigans.”  (I’d also move The Dick Van Dyke Show, my all-time favorite sitcom, up much higher—but this is Lucy’s day, we’ll let her enjoy it.)

As luck would have it, my BBFF (which stands for “best blogging friend forever,” but is pronounced “buh-biff”) Stacia of She Blogged by Night fame is also celebrating an anniversary today—a natal one, and while I can assure you she has not reached the six-oh mark like I Love Lucy, modesty (not to mention threats of physical pain through violence) bids that I not reveal her age…Mrs. Shreve did not raise any foolish sons.  (Not that I’m suggesting you look at this post from last year and do the math, you understand.) Nevertheless, the Thrilling Days of Yesteryear staff and I want to wish her the happiest of birthdays, and if I could figure out a way to bake a Little Debbie Swiss Cake Roll sheet cake for everyone, I would do it in a thrice. 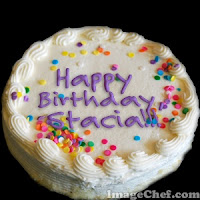 I spent hours watching I Love Lucy reruns as a kid, loved the Hollywood shows, and strangely enough influenced by her fashion sense...thanks for the post!

Aw, thanks babe. Did you know you posted on my blog less than 2 minutes after I put up my birthday post this morning? You are so on top of things it's frightening.

I think you know my love for Lucy by now ... :D But I also think you should know that your recent Dick Van Dyke Show blogathon has made me a DVD convert. Thanks to Hulu, I have watched two dozen episodes since the blogathon, and I've gotten in the habit of watching one or two (or three!) before I go to bed at night. So thank you, Ivan, for showing me what I've missed over the years, because DVD is simply brilliant!

And a very happy birthday to Stacia!

But I also think you should know that your recent Dick Van Dyke Show blogathon has made me a DVD convert.

Well, I'm glad I could offer up some reciprocity...because I was immersed in the I Love Lucy reruns on Me-TV while reading the entries in True Classics' Loving Lucy blogathon and it finally got to a point where I sort of said out loud: "There's a reason why people still continue to love this show...it's hilarious and timeless as ever." (Ask my Mom sometime about my crying with laughter when I watched the episode where Lucy does the tango with the eggs in her blouse.)