“And men are imperfect…”

“I am willing to bet any amount of money that this collection will contain all of the correct music to allow the company to screw fans over one final time.” – Thrilling Days of Yesteryear, 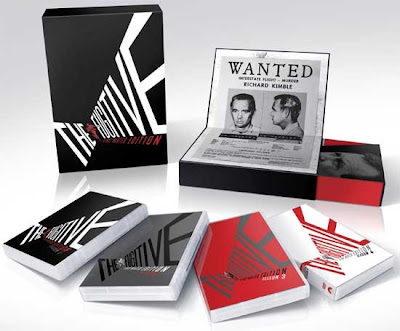 I like to think that when I make an erroneous statement here on the blog that I take extra care in correcting any misnomers (these are commonly pointed out to me in the comments section; any factual missteps are usually corrected upon getting the information)…and the above statement will certainly be no exception.  According to the press release accompanying the announcement at TVShowsOnDVD.com for the November 1st release of The Fugitive: The Most Wanted Edition, CBS-Paramount shill Ken Ross remarks that the music on the collection “nearly all of the original broadcast version music is intact, including all of Pete Rugolo’s original music score.”  So I’m sort of half-right and half-wrong: music that couldn’t get a copyright clearance (songs playing on jukeboxes or in the background, for instance) will still be missing but the score will be intact. 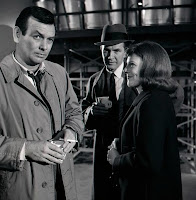 To say that this outcome hasn’t surprised me in the slightest would be the understatement of 2011.  I knew that the company was going to do this because I stopped for a moment and said to myself: “If I wanted to (really obscene verb removed because my niece might surf across this someday) fans over…and I was a CBS-Paramount weasel with the morals of a sewer…what would be the best way to accomplish this?”  Oh, sure…I can hear a few of you clucking out there, saying “Well, surely CBS-Paramount would right this situation by offering fans who bought the original (split-season) sets a chance to either buy or receive the replacement material.”  And I would, of course, chuckle evilly and pet the white cat on my lap by pointing out that according to TSoD, “there are no plans to offer replacement discs for the previous seasons, fans will have to purchase the complete series (currently $136.99 at Amazon.com) if they wish to own the new versions of the episodes.” 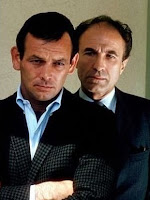 In the words of Gord “Complete fealty to my corporate masters” Lacey, “I'm extremely happy that CBS took the time to correct the music issue with the show, and are providing fans the opportunity to own it in the complete series.” (I can’t help hearing that great line from North by Northwest, when Cary Grant says to Eva Marie Saint: “Why are you so good to me?”)  Gord goes on further: “Normally these complete series sets are a cash-in for the studio, as they're simply repackaging what has already been released, but CBS had significant costs associated with putting this set out, which is why it wouldn't be feasible to offer a trade-in for previous customers.”  (And now I’m starting to hear another great movie line—this one from Jay C. Flippen in : “And me…I’m all busted up about it.”)  Wouldn’t it have been feasible not to have (another earthy verb removed) over consumers from Day One?  (CBS-Paramount: “He’s [Shreve] asking too many questions again…return him for regrooving…”*)
It’s probably best if I not dwell on this—even a person for whom I have nothing but the utmost respect, television historian Stephen Bowie, weighed in on the issue with an editorial (“Tempest Fugitive”) on his Classic TV History Blog:
The real losers here will be the faithless who shrugged, decided that the synthescythed episodes were as good as it would ever get, and forked their cash over to CBS for those worthless volumes.  And you know what?  They deserve to get screwed.  If something’s worth doing at all, it’s worth doing right.  If the DVD re-release does fix the music, then it will be a rare case where those of us who complained and refused to shell out for a disgraceful hatchet job are fully vindicated. (Italics mine.) 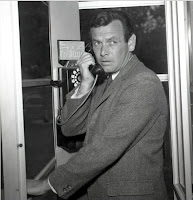 Yeah, fie on us faithless heathens…the ones who kept The Fugitive DVD franchise in play to begin with.  ( doesn’t elucidate as to whether or not CBS-Paramount would have eventually seen the error of their ways if some of the fans hadn’t thrown up their hands in resignation and continued to buy the darn things…in the end, it’s the vindication that counts.) “Better to never see The Fugitive at all than to see it in that state.”  I’m not saying Stephen’s wrong about this; he’s certainly entitled to his opinion and anyone who says otherwise can just step outside—I’ll even hold coats while the discussion continues.  I just took a Faulknerian approach and decided that “between Scotch and nothin’, I suppose I’d take Scotch.”  (And really, it’s hard to be ticked off at a guy who calls you an “amiable blogger”…because believe me, it’s better than what some have called me.) 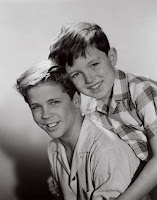 All of this is old news…so let’s dig around for some new items.  Shout! Factory has announced that they’re going to release a collection entitled Leave it to Beaver: 20 Timeless Episodes on January 31, 2012…a set designed for fans of the show who don’t necessarily need to own all 234 episodes of the set (those people—like yours truly—have already been afforded the opportunity to do this…with the Factory releasing the entire run in a big honkin’ collection as well as making each year of the show available in separate, non-split season releases).  The SRP on this puppy will be $12.99 SRP, and Amazon.com is out of the box with an even lower pre-order price.

Speaking of family sitcoms (smooth as glass, I tells ya) the Factory is going to finish up the run of TV favorite Dennis the Menace with the release of the fourth and final season on January 10th of next year.  No one was more surprised to hear about this than I, owing to the fact that the show has sort of languished in television limbo since its glory days on Nickelodeon (from 1985 to 1994; it later turned up briefly on the once-proud TV Land in 2002)—I guess its recent exposure on Antenna TV must be helping sales some.  The fourth season, incidentally, is the one that pits the famed comic strip moppet against Gale Gordon as John Wilson, introduced in Season 3 as George’s brother (Joe Kearns, who played George, died of a cerebral hemorrhage in March 1962)…and to be honest, I thought Gordon looked more like the comics version of the irascible neighbor than Kearns; they should have asked him to play the part to begin with.  The 4-disc set will contain the series’ remaining 38 episodes (and since I already own the first two seasons with number three on its way in another week or so, it only seems right to finish the set) and will sell for a SRP of $29.93 (Amazon already has it for pre-order at $20.99.)

Shout! Factory also has announced that the penultimate season of Adam-12 will debut in stores on that same date (January 10), with a 4-DVD set containing all twenty-four episodes of Season 6.  The SRP is $34.93 (an oddity in that you’re paying more than what you would for Dennis for less episodes) but Amazon has it cheaper here (I don’t want people to get the impression that I’ve started shilling for Amazon, by the way—if you wait a bit you might be able to find it cheaper at DeepDiscount.com or my online store of choice, DVDPacific.com).

In the cold-cereal-and-footy-pajamas department, TSoD also has an announcement that a listing at Amazon.com is touting a set entitled Underdog: The Complete Series that is scheduled to be released on January 24th.  (The listing says this is a Shout! Factory release, who must have borrowed the rights from Classic Media.)  There’s no indication as to whether or not Underdog’s supporting segments, Tennessee Tuxedo and His Tales and The Go-Go Gophers, will be included on this collection…but if they are it would be pretty sweet to own, and for those people who invested in the previous Classic Media sets and now have to buy another product I sympathize with your anger and frustration.  (We will wait on further developments regarding the gophers and Chumley.)

Finally, the box art for The Donna Reed Show: Season 4, an MPI Home Video collection due out December 20th, has been released…and the box does say “The Lost Episodes”—which is explained at this blurb at TSoD that the reason it’s labeled as such is because it’s “a deluxe set of rare episodes not seen in decades.”  Seriously?  Okay, granted—the classic family sitcom has been MIA since, once again, its 1985-94 stint on Nick at Nite (and, again, a brief resurfacing on TV Land in 2002)…but “lost episodes” would seem to indicate that they are shows that turned up in a vault, like the one where Mary loses her virginity to a drifter or Donna and Alex Stone wind up a swingers’ party**.  Hey, I’m just glad the show is continuing to warrant DVD releases; the show’s rights reverted back to Donna Reed’s estate in 2008 (which might explain why it hasn’t surfaced on Antenna TV) and this would appear to be the only way you’ll get to see a TV sitcom classic.
*I made up this quote purely for sarcastic purposes.  Please do not take it as gospel.
**Yeah, I’m making things up again here, too.

Ivan,
Thanks for keeping us informed on DVD releases while entertaining us with your colorful descriptions. (The list of weasels in the industry is long my friend so you just go right ahead!)

Of the ones you listed I'm most interested in Dennis the Menace and Adam-12. I really loved Adam-12, and Dragnet re-runs.
I hope you're having a great weekend.
Page

I'm hoping the episodes on said Underdog release are in better shape and more complete than the ones that have been out for some years now. Considering the Tenessee Tuxedo and Go-Go Gophers also got their own releases, there's a fair to middling shot they won't be included. I'd much rather see Klondike Cat and Commander McBragg, myself.

Ivan, I don't mean to flog what may be a dead horse, but have you heard any more news about a pending re-release of The Fugitive: The Most Wanted Edition any time in 2012?

It would be nice to look forward to seeing it someday. I haven't found any more news after it was pulled from Amazon last Fall. Thanks in advance for any info you may be able to share--and thank you for your blog, which is chockful-of-news at all times and fun to read.
Cheers,
Moira