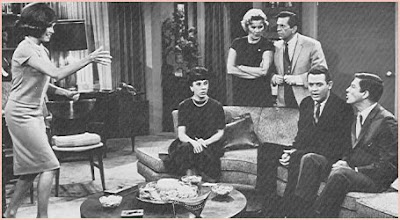 In six hours and counting, Thrilling Days of Yesteryear will kick off its first-ever blogathon in honor of this October 3rd being the 50th anniversary of the television premiere of The Dick Van Dyke Show.  Longtime TDOY devotees already know this, but DVD (as I sometimes refer to it, because I’m a notoriously lazy typist) is my favorite sitcom of all time.  Don’t get me wrong—I have a lengthy list of faves: Andy Griffith, Phil Silvers, The Honeymooners, Green Acres, Get Smart, etc. but if I ever find myself stranded on that deserted island people always speculate about with just one show to watch for the rest of my life, Rob, Laura, Buddy and Sally are going to be my boon companions. 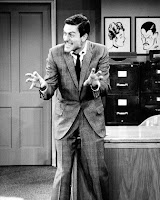 Rick29 at the Classic Film and TV Café gave me a heads up on Twitter that the once proud TV Land will try to recapture some of its former glory by having a marathon of Van Dyke episodes this week from beginning tomorrow (Monday, October 3).  They’ll also feature classic DVD repeats on Saturday, October 8 and Sunday, October 9 from 12 noon to 9 pm…and then afterward, the show returns to the channel to be scheduled at various times.  Now, I fully admit that my devotion to Me-TV has sort of driven a wedge between me and TV Land so if I’m talking out of turn here I apologize fully…but I’ve not seen the show on the channel in quite some time and if celebrating a golden anniversary is what it takes to get it back on a regular basis I’m glad to see it happen.  (I don’t know what Extreme Makeover: Home Edition fans are going to do in the meantime, but that’s not my department.)  It’s a shame that TV Land couldn’t roll out a similar red carpet for Ben Casey or Dr. Kildare—it’s a promotional dream to call it “TV Land's Paradox” (get it?  Pair of…hoo boy…)
I have a post scheduled for that will essentially be a place setter for all the blogathon entries just in case you’re skittish about giving me your e-mail and would rather just post in the comments the URLs of your posts.  This post will be updated periodically throughout the day tomorrow…and on the off chance that you weren’t able to get things assembled in time, I won’t punish latecomers (but the rest of us will make fun of you when you make tracks for the punch bowl).  Once again, let me thank everybody in advance who wanted to be a part of this…as a certain cartoon gopher Indian once observed: “Hoopy doopy, we have fun!”

Hi Ivan! I'll be writing my post about last night's festivities at the Egyptian Theatre later today...Is there a post (perhaps the one going up at midnight?) you'd like linked to so folks can find the other blogathon entries? Thanks!

Towards the end of last night my daughter said "I'm in pain from laughing so much!" Seeing episodes with a huge, appreciative crowd made them even funnier, and Reiner, Van Dyke, and Garry Marshall are awfully funny in person, too. :)

Every time I've thought of "needy bald people" today I start laughing all over again.

Is there a post (perhaps the one going up at midnight?) you'd like linked to so folks can find the other blogathon entries?

The midnight post is the one to link to! In fact, knowing my sleep habits (and the goodies on Me-TV tonight including Thriller, The Fugitive, Naked City and Route 66), I'll probably be awake so when you get your post finished I can get it up on that midnight post.

I am really looking forward to reading your post, Laura...despite the fact that I am Wilson green with envy that you got the opportunity to attend the event. It sounds like you had a tremendous time!

Great! If your post isn't up when I finish mine (it might be, though, given how late I'm running today, and our time differences!), then I'll be certain to add it in ASAP.

I was definitely really, really lucky to be there last night, in the presence of such living legends. I wish every DICK VAN DYKE fan could have been in the room!

After last night I feel the need to give our much-used Van Dyke DVD set another workout. :) I want to see the episode which preceded "Very Old Shoes, Very Old Rice," which we saw last night, and I haven't seen the "Laura stuck in the bathtub" episode in too long...

My mother told me this evening she needs to be up and about by 7:15am...so the alarm may be set after all!

Hi, Ivan. My post is ready to go and scheduled for 4 A.M. Eastern.

I sent you a comment on Facebook, but I'll mention it here as well - at midnight, Inner Toob started publishing posts about 'The Dick Van Dyke Show', one every hour. So far I've got them all loaded up and ready to go until 11 am, and I have the others ready to be finished as well. Hopefully.... (Good thing today is my day off!)

The one I'm most proud of is my tribute to Lennie Weinrib and the three episodes he appeared in, especially "Buddy, Can You Spare A Job?" (It was a bravura performance for which he was hired only five hours before he taped it!)

I'm really looking forward to the festivities and especially can't wait to read Laura's account of the event marking the anniversary.