It may be the earliness of the hour this morning, but I don’t think I remember ever seeing Rob or Laura Petrie hung over from any of those bitchin’ parties they used to throw on The Dick Van Dyke Show.  In fact, my memory seems to be that they were always seen cleaning up afterward before going to those twin beds (snicker)…surely they must have had one instance when they looked around the living room and said: “Screw it…we’ll take care of it in the morning.”  (And then they’d wake up the following day with a head as big as their head, wondering why they were stupid enough to let the tidying up slide.)

I don’t have a hangover this morning, but it feels like one because I’m finding it hard to contain my glee at the success that was Thrilling Days of Yesteryear’s The Dick Van Dyke Show Blogathon.  And 98% of all that (let’s face it, all I did was post links and answer e-mails…something I kind of do on a normal. everyday basis anyway) is because of the great people who wanted to be a part of it, so I doff my TDOY derby to each and everyone of you.  Last night, after a rather loud vocal disagreement with my father—he sort of told me in no uncertain terms that he preferred listening to the flatulent buttheads discussing NJ Governor Chris Christie’s presidential aspirations rather than the conversation between my mother and I (he kept turning up the volume on the set, which sort of got on my wick)—I retired to my boudoir and turned on my best friend, Me-TV, to catch an Odd Couple rerun and hopefully after that a Dick Van Dyke Show episode.  After Felix and Oscar wrapped up their half-hour, I discovered to my dismay that WSB-DT has decided to start showing Cheers reruns after all, which robbed me of my Dick Van Dyke anticipation.  I kind of nodded off after that, and the next thing I knew it was 6 in the am. 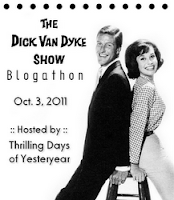 So I wasn’t fully conscious when a few more blogathon entries trickled in last night—I’ve added them to the links post but I also thought I’d include them in this one so you can get a chance to look at them; contributions from Mercurie at A Shroud of Thoughts, Lisa at The Flaming Nose (“I’d Rather Be Bald Than Have No Head at All”), Java Bean Rush at Java’s Journey (“Sally is a Girl”) and Vinnie B., husband to TDOY chum DorianTB at Tales of the Easily Distracted, who talks about “Uhny Uftz” at The Forty Year-Old Fan Boy.  All entries that are worthy of your time, so head on over when you’re pretending to be working in your cubicle. (Oh, and that blogathon banner to your left came from Audrey at Fedoras and High Heels...I'm giving her all my banner business from now on.) 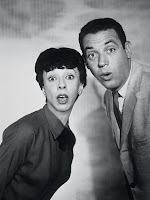 One thing that I’ve taken away from this blogathon was a compliment from Rick29 at The Classic Film and TV Café, who thanked me for structuring the event around a classic TV show...since most blogathons seem to be film or movie-related these days.  I was only too happy to do this, and will definitely consider hosting one in the future…I joked to Hal of The Horn Section that we should be making plans for the 50th anniversary of F Troop in 2015…but a famous sitcom about a family of mountain people who struck oil and moved to a big honkin’ mansion turns fifty next year—so that is certainly something to think about.
Once again, an enthusiastic thanks to everybody who participated.  Now I need to shift into contributor mode myself for my chum Vince’s Carole-tennial(+3), which starts at Carole & Co. on October 6.

Ivan, Vinnie is on his way to work right now, but I thank you on his behalf for your nice words about his FORTY-YEAR-OLD FANBOY "Uhnny Ufts" contribution to your fun, affectionate Dick Van Dyke Blogathon! I agree with you that TV series Blogathons don't get as much play as movie Blogathons -- bless you for changing all that!

Terrific blogathon, Ivan. I'm still catching up with my reading, and I'm enjoying the obviously mutual love for this great show.

Great work, Ivan, it was a wonderful blogathon - I'm still making my way from blog to blog reading everyone's posts. All great stuff. Thanks for putting it all together.

Just put my two cents in over at the Land of Whatever, Ivan. A day late, but hopefully not a dollar short.

Congratulations on a great blogathon, Ivan! I'm off to read all the entries.

Anyhow, I wanted to thank you for hosting this blogathon. All of the entries are top notch, and The Dick Van Dyke Show is truly worthy of the event!

It was a wonderful blogathon, and I have a long list of new-to-me DVD episodes to work my way through now! Thanks for hosting such a fantastic shindig, Ivan--can't wait to see what your next one holds!

Kudos to you, Ivan, for doing some wonderful hosting. And your kind words in return.

It was SO MUCH FUN!

Congratulations on your first blogathon. You even went the extra mile to give a synopsis of everyone's post.

I think of blogathons as a block party where you get to see old friends and meet new ones. Thanks for hosting.

You've given me the courage to start a blogathon. (Well, almost. I'm still chicken.)