Above is one of my favorite “music videos” of all time—Harry Belafonte’s amazing rendition of Don’t Stop the Carnival as performed on The Smothers Brothers Comedy Hour in September 1968.  It was a sequence that the show’s fans did not see until many years after its original airing because CBS objected to the content of the song (Belafonte cleverly mixes in a medley of his hits like Mama Look at Bubu and Jump in the Line while rewriting some of the song’s lyrics with overt political statements) and its visuals (footage of the chaos that went on during the 1968 Democratic Party Convention in Chicago), so they cut the piece and substituted a Q&A session with Tom and Dick (and Tom, clearly becoming more and more pissed off during the session, finally lets loose with an improvised editorial on censorship).  (Both of these pieces are available on the DVD set The Smothers Brothers Comedy Hour: The Best of Season 3, which I talked about here.) 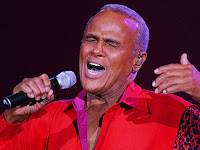 I mention this because I watched the HBO documentary Sing Your Song over the weekend, an amazing film (directed by Susanne Rostock) that chronicles the career of Belafonte, an actor-singer who was also a political activist long before it became the celebrity vogue.  It’s part of a retrospective on Harry that also includes the publication of his memoir, My Song, and when I read about both projects at The Daily Beast two Sundays back my first thought was “Can I talk sister Kat into recording this for me so that I can see it…?”  As it turns out, I didn’t have to—Edward Copeland lent me a copy (he has an in with HBO Documentaries) and all I had to do in return was write about it at his blog, which you’ll find here.  The documentary runs an hour and 45 minutes but because it’s not nearly long enough to chronicle all of his achievements it looks as if I’m going to have to track down a copy of the book soon.

True story: When I was but a lowly CSR (Customer Service Representative) toiling at Ballbuster Blockbuster Video, we were required to put on a videotape about every two hours that contained promos and trailers for many of the movies on VHS in the store…and for some odd reason, whenever the Beetlejuice trailer came on we’d get down with our bad selves boogieing to Belafonte’s Jump in the Line, which is used so memorably in the film.  Ah, youth…

Ivan,
Thanks so much for posting this. I've seen Belafonte on a few evening MSNBC shows recently and at what 79? I was taken with just how handsome and debonair he still is. I didn't hear anything alarming in that video especially anything that would offend anyone's political views during the 70's but it was a different climate then.
I don't have HBO so sadly I missed the documentary.
Page

The Smothers Brothers and Harry Belafonte -- I don't remember that particular show, but that was the brothers all over! Typical of TV at the time to censor Belafonte.

I think Beetlejuice did more to reactivate interest in Belafonte than anything else ever did! Love the dinner scene with the banana song, and even though I am far from "youth", Jump In the Line makes me boogie too ... you just can't help it!

Completely off topic, but I thought I'd pop over and announce that, finally, the second (and Holiday appropriate) half of my contribution to the Dick Van Dyke Show blogathon has finally seen the light of day. Sorry it took so long, but I think it's worth the wait -- he typed ominously....