He don’t mess around, boy… 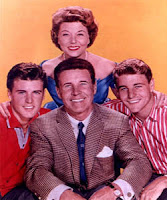 TVShowsonDVD.com made this announcement last week, and I had intended to put something up here in support…but I sort of got distracted with all the blogathon madness from the past few days.  It concerns some recent news about a project being instituted by Sam Nelson, the grandson of family situation comedy icons Ozzie and Harriet (Sam is Ricky’s kid), in which he’s going to make a valiant attempt at restoring the Nelson family TV legacy—fourteen seasons, with a total of 435 episodes—to DVD. 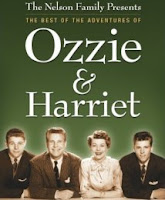 There have been a couple of official Ozzie and Harriet DVD releases put out in the past by Shout! Factory: The Best of The Adventures of Ozzie and Harriet in May 2007, and a “sequel” in July of 2008 entitled The Adventures of Ozzie and Harriet: Best of Ricky and Dave.  The sets contain episodes and bonus material officially sanctioned by the Nelson estate, and while the shows themselves are positively spiffy-looking (there’s a couple of shows from the last season on the first set that are in color, since Ozzie & Harriet’s swan song year was filmed as such) the prints they used were from the edited syndication masters, which went over with fans like flatulence at a memorial service*.

However, there are nearly 9 trillion public domain releases of The Adventures of Ozzie & Harriet** available from scads and scads of DVD companies and while these episodes are unedited (and some have the original commercials) they’re in varying degrees of shape, usually what we like to call here at Rancho Yesteryear “piss poor.”  The most prominent of these was a 100-episode collection from Mill Creek Entertainment that I’m mentioning here because a) when I ordered it from DeepDiscount.com the company sent me this by mistake (they should have mailed out a smaller collection, also produced by Mill Creek) and b) to illustrate my point about how the Shout! releases were embarrassingly cut-up the Mill Creek set has the full version of “Tutti Frutti Ice Cream,” the classic episode where Ozzie is obsessed with the titular dessert and makes it his mission to obtain same.
I own both the Shout! Factory collections, the Mill Creek set, and a few scattered Alpha Video releases—making about a total of 143 episodes of the family sitcom.  But Sam’s goal is to restore and digitize the entire run of the show and release it in all its DVD glory…except that he needs a little help from you folks out in TV Land. 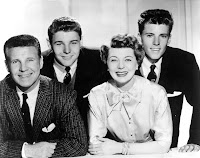 He’s initiated a project over at Kickstarter.com to garner funds and support to eventually release all fourteen seasons of the series to DVD…and if you’ve even a passing familiarity with Kickstarter, you know that even if you have only a few coins rattling around in that sugar bowl you can donate to the cause and every bit helps.  Of course, if you hit the couch cushions or break your kid’s piggy bank when they’re not around to scrounge up something like $10, you’ll be eligible to get your name listed in the liner notes of the complete DVD package.  There are also nifty incentives for pledges of $25, $50, $75…all the way up to $2,500 (or more)—the ultimate goal is to raise $56, 550, which is the price tag to restore the television legacy of “’s favorite young couple” and make it accessible for future coach potato generations. 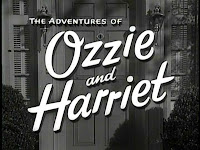 I’ve said this before—practically since I started Thrilling Days of Yesteryear some eight years ago—but Ozzie & Harriet have always gotten a bum rap.  They’ve become a sort of despised symbol of the bland, white-bread family sitcom that was popular in the 1950s with series like Leave it to Beaver and The Donna Reed Show…but I think this does them a disservice because I’ve watched some of the old shows and they’re funnier than you’d think…and downright surreal on occasion.  One of the shows on the Shout! collection, “Captain Salty and the Submarine,” is literally one of the funniest episodes of any sitcom I’ve ever watched.  (The “Tutti Frutti” outing is also a gut-buster…though my enjoyment could stem from the fact that I identified with it so strongly.) 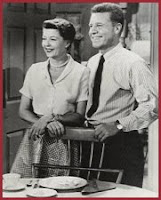 If I was flush with funds here at Rancho Yesteryear I’d take a stab at pledging to restore “Captain Salty”; yes, you can volunteer to sponsor an entire episode…or even an entire season, if your pockets are a little deeper.  But I’m going to take a few shekels and pledge them to Sam’s project and I hope you can, too…I know that I often adopt a snarky tone when talking about shows from the past, but I take the issue of preservation very seriously and I shudder at the thought of my niece coming up to me in about twenty years and asking me “Who were Ozzie & Harriet?”  So if you’re able to give, give till it hurts.
*My Mom has asked me to stop using “fart at a funeral” because it’s really getting on her wick.
**Yes, I am exaggerating a tad.

Ivan , this is cool. I'll get a few just to watch Ricky's back up band with James Burton & Joe Osburn. Besides it's fun seeing a pre ADAM 12 Kent Mc Cord as one of Ricky's frat brothers. BTW did you know that Ozzie directed a number of ADAM12's?

I'll see what I can do. Really, nobody can crack me up like Ozzie.

In the earliest days of MEtv, they were playing some old scratchy prints of Ozzie & Harriet in the overnight hours.
Some things that surprised me:
- Seeing Ozzie and Harriet in a double bed, as far back as the early '60s (maybe before). I remember reading that Ozzie insisted that the soundstage sets be exact replicas of his own home, apparently including the bedroom. My TV Guides contain no evidence that ABC gave him any attitude on this topic, nor did they when in later years Rick and Kris were shown sharing a double.
- Staying with TV Guide, last night I came across an article concerned with Ozzie's total control over the production, how he made it a point to know everybody on the crew and how to do their jobs as well as they did.
One year at Christmws, the crew gave Ozzie a scroll, bordered by cards representing every trade union in the business - cards Ozzie could not have held, but the crew recognized that wnenever Ozzie made a suggestion, he was usually right.
- I saw one show where Ozzie ended the episode with some outtakes of a scene that hadn't gone right. Early '60s, may have been a first.
- In some of the earliest episodes, the credits would begin with a shot of Ozzie fumbling something - dropping coins in a phone booth, locking himself out of the house, knocking something over - and it would be over this kind of shot that the credit would appear:
Produced And Directed By
OZZIE NELSON
Nice touch, no?

In later years, Ozzie Nelson would appear on talk shows and kid about his supersquare image,but he came across as a sharp, smart guy with a tinge of crazy humor. He was impossible to dislike - and the proof of that was that he kept the same crew together for over a decade filming his show.
I'd say a reevaluation is overdue.

I am thrilled and delighted to be able to announce to you something that might put my Car 54 reputation behind me -- I LOVE Ozzie and Harriet. My memory of it is not good enough to speak of individual episodes, but I do remember looking forward to it and doing a lot of laughing. I have not seen it in syndication for many years -- I must not have the right channels -- and would really love to be able to see it again.

I agree that there were shows that have gotten a bad rap over the years (Father Knows Best is probably the most maligned just because of it's title after the feminist movement, but it was good!). Ozzie and Harriet deserves to be known better. The Kickstarter thing is great - I participated in an effort to bring an original play to the stage (which didn't work unfortunately). If I can find some spare moolah, I'll do it for Ozzie, Harriet and the boys.

Thanks for the heads-up and the usual fun post, Ivan. (I don't suppose your Mom likes "flatulence at a memorial service" any better than "fart at a funeral", but I think it's funnier.)