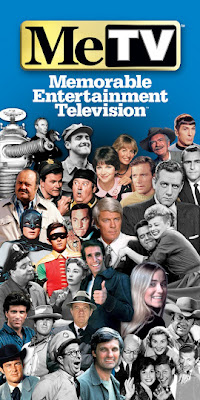 Last week on the checklist, I wrote a tiny blurb (blurbette?) about seeing some Me-TV promos for the TV shows Emergency! and Remington Steele, which would be making their debuts on the classic television channel in the fall.  At the time, I expressed some reservations about this because there have been a lot of cable channels who have featured vintage TV in the past (Nick at Nite, TVLand, GoodLife TV, etc.) and then once they receive a little exposure or a larger audience start to “update” their programming.  For example: I can remember enjoying The Patty Duke Show and the pre-1965 My Three Sons on Nick at Nite once upon a time.  Nowadays it’s Yes, Dear and Boy Meets World—shows I didn’t watch the first time they were on, and have little interest in seeing now. 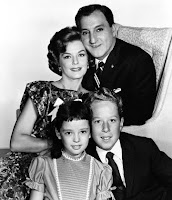 My fellow boob tube enthusiasts hobbyfan and Mike “Mr. Television” Doran joined me for a nice friendly convo about this in the comments section…but it was Cultureshark blogger-in-exile Rick Brooks who was nice enough to shoot me a heads-up e-mail that even though Me-TV is adding the previously mentioned programs, they are not going to totally abandon their classic TV mission.  (The details can be found here at Sitcoms Online.)  In addition to Emergency! and Steele, Me-TV will welcome Make Room for Daddy (The Danny Thomas Show), The Donna Reed Show and Night Gallery into the fold.  They’re also going to introduce a feature called Me-TV Sunday Showcase—which according to the MeTV website will spotlight “marathons, themes, tributes, rarely seen shows—all memorable favorites!”  (For example, the first “Sunday Showcase” will feature a mini-marathon of Night Gallery episodes, to be telecast on September 9th.) 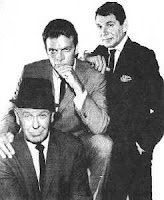 Me-TV is also going to bring Kojak out of hibernation, as well as the 1963-65 crime drama Burke’s Law (the amusing thing about this is that it will replace The Rogues at on late Saturday nights—it’s like Four Star Television has their own designated time slot).  But with the additions and returnees, that means a few shows will have to be stored in mothballs—the only one I’m kind of bummed about is The Untouchables…and even that’s not such a big deal, because I have the first three seasons of that series on DVD already (and hope to get the fourth and final season someday when my father one day goes out to shoot for some food and up from the ground comes bubblin’ crude.  Oil, that is.  Black gold.  tea.)  The other shows we’ll say goodbye to (though as Mike has pointed out in the past, they may return like the proverbial bad check) are Family Affair, Cannon, The Mothers-in-Law, Love, American Style, Green Acres, Honey West, The Rogues, Happy Days and Laverne & Shirley.

Saturday
05:00am Gumby
05:30am The Famous Adventures of Mr. Magoo
06:00am He-Man & the Masters of the Universe
07:00am She-Ra: Princess of Power
08:00am E/I series
11:00am The Rebel
Branded
The Guns of Will Sonnett
Gunsmoke
Bonanza
The Big Valley
The Rifleman (inherits Wild Wild West’s time slot)
Emergency! (inherits Rifleman’s time slot)
06:00pm Hogan’s Heroes (replaces Green Acres)
Batman
Lost in Space
Star Trek
Svengoolie
12:00am Voyage to the Bottom of the Sea
01:00am Get Smart
02:00am Car 54, Where are You?
03:00am The Many Loves of Dobie Gillis (replaces Honey West)
Burke’s Law (replaces The Rogues)

If you need a copy to keep by the TV set…you can download one here.

Just as I was getting ready to post this sucker—I got an e-mail from Melissa Prince at the INSP network about an acquisition to their lineup that I know some people (particularly my pal Laura at Miscellaneous Musings) are going to flip over: the channel has acquired the broadcast rights (from CBS Television Distribution) to the 1967-71 oater The High Chaparral:

First aired on , The High Chaparral featured the life and struggles of the Cannon and Montoya families in during the 1870s.  Under the direction of David Dortort, the creator of the project (and the genius behind such classics as Bonanza), the producers of this series were committed to realism and went to unusual lengths to depict actual conditions of the West.  Even the Apaches who worked as extras on the set were real.  In many ways ahead of its time, the program explored culture and class conflicts among Caucasians, Hispanics, and Native American tribes to an unprecedented level.

As the exclusive cable home of this and other western series, INSP is proud to offer a new generation of Americans the opportunity to fall in love with the characters and stories that made The High Chaparral a western classic. Launching on September 15th, viewers can enjoy an all-day marathon beginning at .  The series joins the Saddle Up Saturday line-up beginning September 29th and also is scheduled to air in the Monday-Friday lineup.

The other hours are used for SHOP AT HOME things.

The shows I don't see are enticing.

I get some solace from Antenna TV which is 24 hours,

"I cried because I had no shoes...until I met a man who had no feet." I really feel for you, man -- we lose MeTV Sunday mornings from 6-11am for infomercials, and during high school football season it goes dark on Friday nights to telecast select games. (The WSB affiliate also pre-empts the programming from time to time for arena football.) So the next time I start bitching about losing the second ha;f-hour of Bilko I'll remember how lousy you have it. (Shop at Home...feh!)

Ooooooh! I think I get INSP network. Will check as soon as movie is done recording. Thanks for the GREAT news!

What are the chances that Me-Tv will somehow make it to Dish Network?
I knows its probably crazy talk but I would love to see it on there.

Not to rub it in or anything like that ...
Anytime something gets squeezed off the MeTV slate, we here in Chicago can often count on it getting picked up by MeTOO, one digital channel over.
At present, MeTOO is showing Star Trek amd ST: The Next Gen in prime time, leading into sitcoms like Bewitched, Frasier, some others I can't call to mind.
On weekends there's StoogeAPalooza on Saturday nights (Chicagoans have to remember to change cahnnels at 9pm (Central) to get a full night of Rich Koz), and a block of mystery shows on Sunday mornings and afternoons (they switch them around periodically) fron 9am to 6pm; this might be changed in the fall (have to check.
I'm currently taking (or being taken by) AT&T U-Verse cable, which hasn't (yet) picked up THiS, the Ugroup's movie station, but I live in hope - I really miss Highway Patrol.

"I wept because I had no shoes,
And then I met a Man who had no socks."
- the Gospel according to Miami Vice ;-P

MeTOO retired the Star Treks at the onset of summer, and has been running Detective shows in their stead, one series-two episodes each night (Charlie's Angels, Rockford, Magnum, Hart To Hart).

Rockford had just returned and gave Kojak a summer vaca, after it'd been placed on hiatus to make room for Hogan's Heroes. Now it moves further up the trail.

Insp is all of a sudden a playa. They share The Waltons with GMC, Big Valley with Me-TV, and now they're scoring by bagging High Chapparal. Suh-weeeet!!!!

The only downside is that Insp has fallen into the bad habit of compressing the credits at the end of the show so they can move on to the next ep. El suckola. I've seen this with Big Valley & Happy Days in recent days, and I cringe. Who's the jabroni in charge?

The only downside is that Insp has fallen into the bad habit of compressing the credits at the end of the show so they can move on to the next ep. El suckola. I've seen this with Big Valley & Happy Days in recent days, and I cringe.

I could write a multitude of blog posts on how this practice irritates the heck out of me. I can't say for certain, but it seems to me TVLand instituted it...and then alleged "movie channels" like AMC followed suit by speeding up the closing movie credits (another pet peeve of mine). Me-TV has a promo that pokes a little fun at this, declaring that "we give credit where credit is due." (And that's the way Me likes it!)

Ivan writes: I could write a multitude of blog posts on how this practice irritates the heck out of me.

Oh yeah. The Television Tropes and Idioms website refers to this as Credits Pushback and it comes in various flavors. Check out the link for, if nothing else, the wonderfully apt comment of Charlie Brooker that leads the article, which concludes:

It's a bit like the moment you finish a novel. It's nice to gaze wistfully out of the window for a few moments and reflect. But how much shittier would that be if the minute you finished, someone tried to get you to read another book and another book!?

My personal bugaboo is with digital time compression, which for the unititiated, speeds up the show ever so slightly without affecting audio pitch, making an extraa minute or two for commercial content.

This is done on Hallmark's Perry Mason episodes, along with Credit Pushback both front and back, with somewhat comical results if they're not careful.

Perry normally has a ponderous walk and line delivery, but suddenly he has a spring in his step, and an energetic line delivery.

Paul Drake, on the other hand, normally has a quick step and rapid-fire line delivery, so he speeds around like he's on wheels and sometimes his dialog is nearly unintelligible, and sounds like the old FedEx Fast Talker ads of the eighties.

Oughta be a law. Thankfully MeTV does not engage in either of these practices, God Bless 'em.

And I'm relieved to find that MeTV has left the "Sunday Noir" block untouched. Thank you!

Very happy to see that the Hearst station in Boston has grabbed Me-TV from the other local station that had it. Now we actually get the FULL schedule instead of infomercials late at night (and the picture is better too).