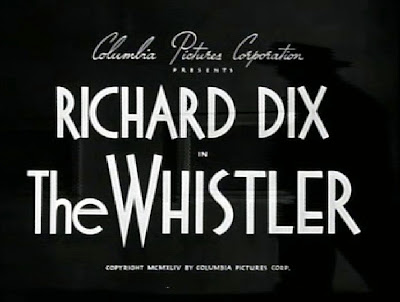 This morning at the Radio Spirits blog—or what we’ve come to call here at Rancho Yesteryear “the paying gig”—I kicked off a series of reviews of the films from Columbia’s Whistler movie series, to coincide with The Greatest Cable Channel Known to Mankind™’s scheduling of the first feature, The Whistler (1944), this Saturday (September 1) at 10:45am.  I was fortunate to obtain good copies of all eight movies in the Whistler franchise many moons ago from a collector, and though I have seen all of them I’m having fun revisiting these old favorites in my capacity as RS blogger.

Every now and then, I’ll watch something with a familiar character actor…and then it’s almost like I keep running into him in every movie I view afterward.  You may remember that one of the “stars” in our Serial Saturdays presentation of Jungle Queen (1945) was Cy Kendall, who played the skeevy boardwalk dive proprietor Tambosa Tim…and in the serial I dissected after finishing Queen, Kendall turned up again as the head bad guy, Curtis Monroe, in The Green Hornet (1940).  In the piece I wrote for the Summer Under the Stars blogathon on Tarzan’s New York Adventure (1942)… is Colonel Ralph Sargent, the crooked circus owner who helps kidnap Boy (Johnny Sheffield).  He’s also in—believe it or don’t—Christmas Holiday (1944), which I reviewed for the Gene Kelly Centennial Blogathon…he’s Teddy Jordan, the gambler who Gene Kelly’s character points out to Deanna Durbin’s Abigail—I don’t remember if Kendall had any lines, but there was no mistaking his presence.

This weekend, I had a rare moment of television-to-myself Saturday night and I watched one of my favorites on TCM on Demand, Call Northside 777 (1948).  ’s in that, too…as a bartender.  He also tends bar in The Whistler, which brings me back to where I started with this in the first place.  I can’t get away from the guy!

Also in The Whistler is this familiar face, who has the small role of a deaf-mute who reads Superman comic books… 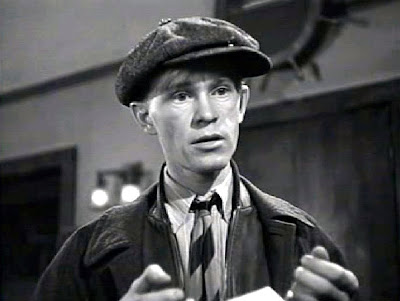 …yeah, it’s our old pal William “Billy” Benedict.  Benedict, as I mentioned in my write-up on Brenda Starr, Reporter (1945) for the Guilty Pleasures Blogathon, has a small role in that serial as a comic relief copyboy alongside the star, Joan Woodbury… 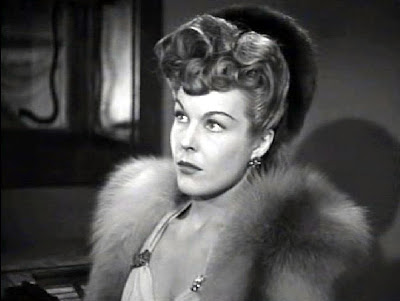 …who also has a part in The Whistler, as a vengeful spouse trying to kill the film’s main character.  (I laughed out loud when I saw her, saying to myself “Brenda’s gone bad!”) 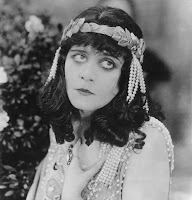 Well, so much for my movie-related antics this week…but this does give me an opportunity to segueway (like glass, I’m tellin’ ya) to an announcement that might be of interest to classic movie bloggers.  Back in June of this year, several bloggers (including myself) had a bit of a chinwag on the Twitter regarding the Large Association of Movie Blogs’ bold, revolutionary move to award its Best Classic Film Blog LAMMY to a blog that…well, really wasn’t a classic movie blog to begin with.  Some resigned from the LAMB because of the organization’s mind-bogglingly jerkwad behavior; others severed ties because it was becoming increasingly obvious that the LAMB was too large and insiderish to have the classic movie blogging community’s interests at heart.  It was distinguished author Terence Towles Canote, best known for his book Television: Rare & Well-Done:Essays on the Medium and blog A Shroud of Thoughts, who proposed that an organization be built to accommodate the aforementioned interests, and to provide an outlet for the socializing that often occurs between classic film bloggers.  Terry cut the ceremonial ribbon on this project yesterday: The Vintage Association of Motion Picture Blogs.  The title is a little unwieldy, granted…but we liked the acronym (VAMP) and immediately decided upon appointing silent film siren Theda Bara as the official mascot.  As Terry further explains:

VAMP is an association for bloggers who write primarily about films made before 1980. The word "vintage" is used instead of the word "classic" for the simple fact that not every old movie is necessarily a classic, the word classic implying a level of greatness that not every film will possess. Nineteen eighty is simply an arbitrary cutoff point with the understanding that a film must be of some age to be considered "vintage." Many film bloggers might set the cutoff point for vintage films much earlier.

If you’re interested in being in the association (keeping in mind, of course, that you should always be mindful with whom you associate) you can send a “deal me in” to the Twitter address @VAMPblogs or an e-mail to thevampb(at)gmail(dot)com.  (And tell ‘em Ivan sent ya!) 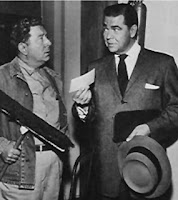 I saw a promo on Me-TV the other day for their upcoming Sunday Showcase program, which is scheduled to debut September 9th with a mini-marathon of Rod Serling’s Night Gallery (being added to the fall line-up) but according to their website will also spotlight “themes, tributes, rarely seen shows—all memorable favorites!”  Two of those memorable favorites have their opening credits featured in the spot; the first being Wagon Train (and it’s from the solo color season), which Encore Westerns still has on their schedule (our RTN/RTV affiliate ran it on Saturday and Sunday mornings, too—but they always seemed to show the same eight episodes) weekdays at 3:20pm.  It was the second show that made me sit up and take notice—The Millionaire, the popular 1955-60 CBS-TV anthology featuring Marvin Miller as the employee of a rich guy (voiced by Paul Frees) who handed out checks for a million simolians to people every week.  I’ve never seen the show, so I’m kind of stoked about catching it…perhaps this will usher in other rare and rarely seen classics as well.  (Knock wood.) 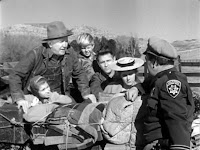 A couple of classic TV-on-DVD announcements that I need to address begins with this blurb from TVShowsOnDVD.com that the scheduled September 18th release of The Real McCoys: The Complete Series from Inception Media Group has been yanked, and that the company is going to release the first three seasons as separate sets—or I should say more accurately re-release—before bestowing upon consumers the big enchilada (details remain fuzzy, but it will apparently be some time in 2013).  (I already own the first four seasons separately.  I cannot catch a break.)  The Real McCoys: The Complete Season #2 (keep in mind that this is probably a misnomer, since the earlier Infinity Entertainment sets featured the edited syndicated versions) will be released to stores on November 13th in a set that will price at $24.98 SRP and contain all thirty-nine episodes from Season Numero Dos.

Speaking of fourth seasons (so smooth), Shout! Factory will prepare the penultimate season of the classic sitcom Hazel for release in time for holiday shoppers with a 4-disc collection (priced at $34.93 SRP) on December 11th.  All twenty-six episodes of Season Four will be included, especially the episode “Marriage Trap” () which guest stars the actor who headlines Thrilling Days of Yesteryear’s weekly Mayberry Mondays feature, Ken Berry.  (When I manage to get a little jingle in my pocket one of these days I will have to invest in Season 3.) 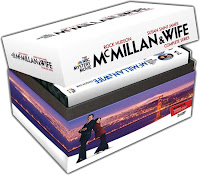 TSOD also brings news that the McMillan & Wife: The Complete Series collection that VEI originally scratched at the post is now back on schedule, with a street date of October 23rd.  The 24-disc set will also include a bonus DVD of the NBC Wednesday Night Mystery Movie favorite, The Snoop Sisters, not to mention all forty episodes of McMillan & Wife (and its ill-advised follow-up series, McMillan—which made the police commissioner a widower when co-star Susan Saint James couldn’t come to terms with the studio). 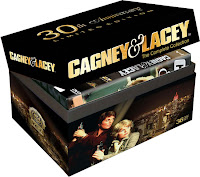 Also on the VEI slate—though the scheduling is still not set yet—is a 32-DVD set entitled Cagney & Lacey: The Complete Series, which will retail for $139.95 SRP and contain all of the episodes from the popular crime drama’s 1982-88 CBS-TV run.  But Cagney & Lacey creator Barney Rosenzweig will also be making a limited edition set available for the series’ die-hard fans (available for purchase only online) that will contain 36 discs…and will not only include the shows with Tyne Daly and Sharon Gless but the show’s 1981 pilot (with Loretta Swit in the “Cagney” role—she couldn’t get out of her M*A*S*H commitment to reprise her role when the show became a series), the six 1982 episodes (called “The Lost Episodes”) with Meg Foster as Cagney (the network insisted she be replaced because they thought she was “too dykey”) and the four post-series reunion TV-movies, along with a fistful of other goodies.  Rosenzweig says that only 3000 of the Limited Edition set will be pressed—so if there are 3001 die-hard Cagney & Lacey fans out there someone is seriously boned. 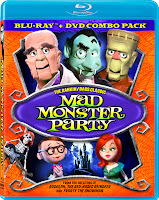 Finally, on a melancholy note: I’m sure you have all heard by now of the passing of one of the truly wonderful stand-up comics of my and anyone else’s generation: the incomparable Phyllis Diller.  Phyllis lived a long one, but passed away at the age of 95 on August 20th—and though it was purely unintentional on their part, Lionsgate Home Entertainment will pay the comedienne a nice tribute with the release of the cult classic Mad Monster Party? (1967) to both DVD and Blu-Ray September 4th.

Some of you know the Rankin-Bass people are the ones responsible for television Christmas specials like Rudolph the Red-Nosed Reindeer and Santa Claus is Coming to Town (older folks, like myself and hobbyfan, are familiar with their Saturday morning output like Smokey Bear and The Reluctant Dragon/Mr. Toad Show), but in 1967 the animation studio released Mad Monster Party?, a stop-motion favorite featuring the voices of Diller, Boris Karloff, Allen Swift, Ethel Ennis and Gale “We’ll Sing in the Sunshine” Garnett.  A rep for the company, Traci Speir, e-mailed me to let me know my name’s on the list to get a screener for the film so I hope to have a review of it up when it arrives in my mailbox.