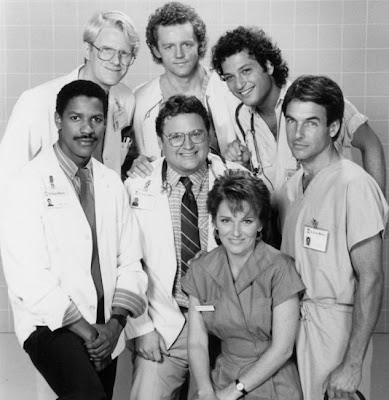 Today marks the thirtieth anniversary of the premiere of one of TV’s finest dramatic programs: St. Elsewhere, a medical drama created by Joshua Brand and John Falsey and set against the background of St. Eligius, a fictional teaching hospital in .  The program, which ran for six seasons on NBC despite never ranking higher than #49 in the seasonal Nielsen ratings, won multiple Emmys (and a Peabody Award) and many critical raves for its splendid ensemble cast and exemplary writing.  I never—ever—missed St. Elsewhere during its original network run, and to this very day it remains one of my favorite TV shows (something that did not escape the notice of TV Guide, which ranked the show #20 on their 2002 list of the 50 Greatest TV Shows of All Time).

My good friend and former editor Edward Copeland has written an anniversary tribute to Elsewhere that I cannot recommend highly enough, but the essay also inspired a tangential piece on the state of Elsewhere’s spotty history on DVD and the issue of 20th Century Fox Home Entertainment’s reticence to release more of their television inventory to home video.  Fox, which owns the MTM library, released the inaugural season of St. Elsewhere to disc in November of 2006…and for those of you who have been waiting for subsequent seasons, I hope you haven’t left the car engine running.  It’s not the first time a studio has done this—and sadly, I fear it won’t be the last—but it’s a frustrating thing for staunch couch potatoes like myself who are passionate about the preservation of classic television shows.  It’s an all-too common rant here at Thrilling Days of Yesteryear, but a majority of both local stations and cable channels would rather fill airtime with mind-numbing talk shows and/or "reality" programming than to introduce new generations of viewers to treasures from the medium’s past.

Faithful TDOY readers are also aware that whenever I get wind of a classic television show that’s coming to disc I like to give interested parties a heads-up whenever possible.  But in the case of Fox Home Entertainment…they don’t get mentioned much.  The reason is: their track record isn't too much to get excited about.  I know I give CBS DVD-Paramount a lot of grief for their odious split-season releases…but if we’re going to lay any blame for the practice, Fox bears the responsibility for instituting it in the first place.  After the first season DVD release of Lost in Space failed to meet the company’s sales targets (the monochromatic nature of the show’s inaugural season was blamed—which reminds me of what a company once told my In the Balcony compadre Laughing Gravy: “People won’t buy a movie in black-and-white unless John Wayne is in it”), Fox Home Entertainment released the second season in two “volumes,” charging the same price for each of those sets as a single set.  They repeated the process with the show’s third and final season, and also gave the split-season treatment to their releases of The Time Tunnel (even though this series only aired for one season) and Voyage to the Bottom of the Sea.  It took nearly five years for the compete run of Voyage to be released to DVD—even when the actual series only ran for four.

The company also had the DVD rights to The Big Valley (even though that series was produced by Four Star Television), and after putting the first season of the Barbara Stanwyck-starring western on disc, decided they would go the split-season route for the show’s sophomore year.  One volume of Season 2 was released in January 2007…and then nothing.  It’s not known if Fox will ever finish out the show’s run…or even if they’re going to bother to try.  You’d think with the resurgence of the series on TV—it airs prominently on both Me-TV and INSP—and a big screen version coming to theater screens soon they would want to strike while the iron is hot. 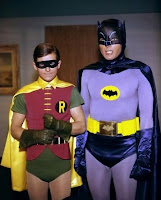 Sadly, that’s standard operating procedure for most of the material in the Fox library.  Properties like Batman languish in DVD limbo because no one is exactly certain who has copyright jurisdiction (Fox or Warner Brothers, who took over DC Comics in 1969)—there are also those who say Warners is reluctant to have the campy 1960s TV classic tarnishing their lucrative “Dark Knight” franchise.  There are other stories floating around: the cameos on the iconic 60s program would necessitate the payment of royalties; even the Batmobile apparently wants a cut.  My question is, however—why would a company continue to foot-drag on something that would make them a great deal of money, considering the demand for the series on DVD?

Other 20th Century Fox TV shows like My Friend Flicka, Broken Arrow, The Many Loves of Dobie Gillis, Felony Squad, Judd for the Defense, Julia and Nanny and the Professor are still cooling their heels in Fox’s waiting room.  Fox did lease two of their shows, and Room 222, to the Shout! Factory label sometime back—but the company stopped with 222’s second season and only two volumes of Place (with thirty-two shows each) ever saw DVD action…it looks as if interest in continuing them is on the wane.  (There was at one time a rumor that MPI Home Video was working on a DVD release of Fox’s 1968-70 sitcom The Ghost and Mrs. Muir…but that’s another project that seems to have slipped through the cracks.) 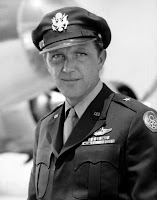 I’ve heard most of the rationalizations.  “This kind of release only serves a niche market.”  “The economy is in the crapper right now, and people don’t have the disposable income for that sort of release.”  The problem is—even when the economy improves, the company is still going to sit on these shows, as born out by Edward's article.  And if it is a “niche market”—why not lease the shows to a company who’s equipped to handle that sort of thing?  It’s mind boggling that a company like Timeless Media Video can release obscure boob tube chestnuts like 87th Precinct and Arrest and Trial to disc…but you can’t give 12 O’Clock High a DVD release?  The show is in perpetual reruns on Me-TV—why not use that as a platform to advertise a season set or two?

I’ve never made any secret of the fact that I have, in the past, dealt with nefarious elements in the dark corners of the Internets to obtain copies of shows long disappeared from television screens.  I’ve been chided by close friends for supporting the bootleg trade.  But I still vociferously maintain that should a company get off its duff and start poking around in its vaults for the treasures we know to be in there, and give them a proper DVD release (you don’t even have to mess with the bonus extras and all that other foofrah—I’ll take the episodes as they are)…I’d be an all-too-willing consumer.  It’s something to think about on a day when one of TV’s best shows remains out of reach for its fans, old and new.
Posted by Ivan G Shreve Jr at 12:00 PM

It's crazy. You'd think they are against making money.

Makes no sense to me -- marvelous show like St. Elsewhere and no DVD availability. And don't even get me started on "reality" TV and infomercials. They have destroyed creativity, and prove to be true the prophecy of the man whose name I can't remember at the dawn of television -- that it will be a vast wasteland. Now it is.

I love 12:00 High, and Robert Lansing is a real favorite of mine. Would love to have that too!

Newton Minow was the wasteland guy. He was the Chairman of the FCC.

As far as 12 O'Clock High, I became interested in it when MeTV started showing it again, & read on an IMDb forum that no had one bothered to renew the copyright.

I've managed to record almost all the episodes (Will get the rest when MeTV appears on my cable, promised 31 Oct., as it's much easier to cut out the adverts when dubbing from a DVR recording rather than recording it "live.") & it wouldn't be "bootlegging" if there's no more copyright, would it? Maybe I'll start a mail order business.

I must reluctantly confess that I have a bootleg set of 12 O'Clock High episodes, which I believe were recorded when the show was rerun on The History Channel or The War Channel or whatever it's called. But if an official set came out...done, sold, Bob's your uncle.

In my family, we call it the Hitler Channel....