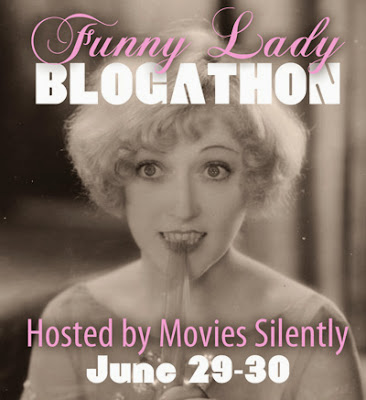 The following is Thrilling Days of Yesteryear’s contribution to The Funny Lady Blogathon, hosted by Movies Silently from June 29-30.  For further information on the subjects chosen for this event and participating blogs, please click here. 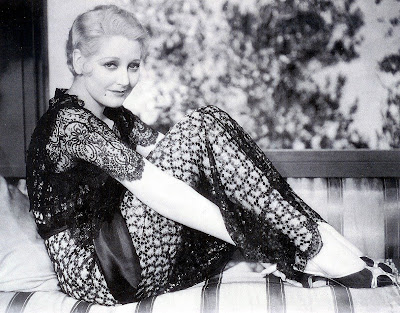 It’s still one of ’s most intriguing mysteries:  on , a vivacious, popular actress named Thelma Todd leaves a party and days later is found dead in a garage, slumped over the steering wheel of her automobile.  The official cause of death was carbon monoxide poisoning—but speculation was the order of the day both then and now: theories still abound as to whether she committed suicide, whether it was an accident, or whether she met with foul play (rumors were rampant that racketeers were trying to extort money from her).

The event has been the subject of several books and articles—one of them, Andy Edmunds’ Hot Toddy, was adapted into a TV-movie in 1991 entitled White Hot: The Mysterious Murder of Thelma Todd…with blonde sexpot Loni Anderson in the title role.  This, however, is going to be the extent of my discussion on this particular topic…because I’d rather talk about instead how I best remember Thelma Todd: as one of the finest film comediennes in the history of motion pictures.

The curious thing is: Todd herself had aspirations of being a serious actress.  And she did make a number of “serious” films—one of her best known is the first version of The Maltese Falcon (1931—often shown under the title Dangerous Female), in which she plays the widow of Sam Spade’s murdered partner, Miles Archer.  Her business partner (and lover) Roland West tried to promote her as a serious actress in his 1931 film Corsair—even to the point of changing her name to Alison Loyd.  (The “metamorphosis” lasted but one film—she soon went back to her familiar matinee moniker.) 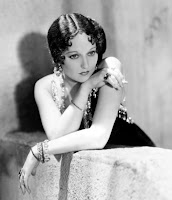 But despite appearances in films such as This is the Night (1932), Call Her Savage (1932) and Counsellor at Law (1933), classic film audiences remember Todd best as a spunky and sexy presence in many a classic comedy film.  Much of this is due to the fact that Thelma signed a contract (after being dismissed by First National) in 1928 with Hal Roach Studios—the mirthmaking company that had overtaken Mack Sennett’s Keystone in the 1920s to become the new “factory of fun.”  Here she worked alongside comedians such as Max Davidson (Hurdy Gurdy), Harry Langdon (Hotter Than Hot, The Head Guy) and the Boy Friends (Love Fever), making two-reel comedies that often had motion picture audiences rolling in the aisles. 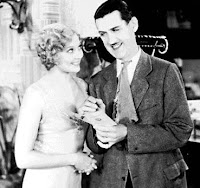 Some of Thelma’s most successful film work was in support of Hal Roach’s star comedian Charley Chase.  She appears in one of Charley’s best loved two-reelers, Whispering Whoopee (1930), in which the comedian throws a party for three business clients by hiring some “party girls” (Thelma is one of the girls, as you’ve no doubt surmised) and then when he learns that the clients are strait-laced party poopers tries to talk the girls into acting refined.  (This does not turn out as he hoped, thanks to some spirits and a bottle of seltzer.)  My personal favorite of the Todd-Chase teamings is The Pip from Pittsburg(h) (1931)—Thelma is a blind date that Charley goes out of his way to physically repulse until he sees how attractive she is and frantically attempts to clean himself up.  Other first-rate Chase comedies that featured Thelma include All Teed Up (1930), Looser Than Loose (1930) and The Nickel Nurser (1932).

Thelma also worked with Roach’s biggest stars on the payroll—the comedy team of Stan Laurel and Oliver Hardy.  She’s in one of my favorites of The Boys’ comedies, Chickens Come Home (1931), playing the role of Ollie’s wife; in this hilarious short, Mr. Hardy is running for mayor (with little help from his friend Mr. Laurel) and his election chances appear doomed when an old flame (the ever popular Mae Busch!) comes back into his life demanding blackmail to keep their sordid past a secret.  Thelma also appears in Unaccustomed As We Are (1929—as Edgar Kennedy’s wife) and Another Fine Mess (1930), and had a plum role in one of Stan and Ollie’s feature films, The Devil’s Brother (1933).  Thelma’s final movie project was a meaty part in the Laurel & Hardy operetta The Bohemian Girl (1936); her work had been completed but Hal Roach had all of Thelma’s scenes either deleted or re-shot—what remains is a musical number (Heart of a Gypsy). With her success in the Chase and L&H comedies, her boss Hal Roach decided to pair her with another actress under contract, ZaSu Pitts, in a series of two-reel shorts patterned off the slapstick antics of his successful Laurel & Hardy team.  It’s an idea the producer tried as far back as 1928 (with Anita Garvin and Marion Byron) but with the Pitts-Todd shorts he got a little bit closer to what he was shooting for.  The problem in making the comedies is that slapstick performed by male comedians doesn’t always transfer well to female funsters—which is why some of the Todd-Pitts two-reelers, like Red Noses (1932) and Show Business (1932), fall a little flat in their execution.  The best shorts of the series benefit from Thelma’s irresistible charm and ZaSu’s disarming ditziness—and the utterly beguiling camaraderie between the two women (they genuinely loved working together, and it shows).  One of their comedies, On the Loose (1931), has a hilarious closing gag featuring a pair of famous comedians…I’ll keep it under my hat in case you’ve not seen it.

I wrote an essay on the Todd-Pitts comedies back in September of 2010—and I still think my favorite of their shorts is Asleep in the Feet (1933)…with second place going to The Bargain of the Century (1933—directed by Charley Chase) and third Maids a la Mode (1933).  Sadly, Pitts left the Roach studios in mid-1933 after failing to come to terms with a new contract…but the Todd two-reel shorts continued; this time pairing Thelma with comedienne Patsy Kelly.  I’m on record as saying that while the Todd-Kelly shorts lack the charm of the previous Todd-Pitts entries there is still much comedy gold to be mined from them; I’ve also written about some of their comedies here but my particular favorites include Babes in the Goods (1934), Hot Money (1935) and Top Flat (1935). 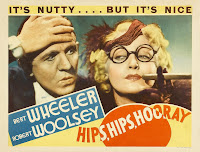 With her stock at the Hal Roach Studio at a precipitous high, Thelma was loaned out by her boss in support of a number of well-known movie comedians.  In fact, her best known work among movie fans (in fact, I’m reasonably certain it was my exposure to Todd’s work) might be the two feature films she made with Groucho, , Harpo and Zeppo—collectively known as The Marx Brothers.  She’s the sexy moll of racketeer Harry Briggs in the shipboard Marxian nonsense Monkey Business (1931), and more delightfully, “college widow” Connie Bailey in the Brothers’ wacky collegiate romp Horse Feathers (1932).  Thelma also appeared in a pair of Bert Wheeler & Robert Woolsey vehicles—their all-time best effort, Cockeyed Cavaliers (1934—Thelma plays a role similar to the one in the Laurel & Hardy feature The Devil’s Brother) and the entertaining Hips, Hips, Hooray! (1934).  Todd further added to her comic film resume by supporting Joe E. Brown (in Broad Minded and Son of a Sailor) and Buster Keaton (Speak Easily) as well. 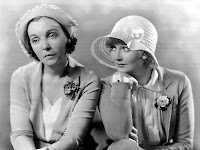 Thelma Alice Todd, “The Ice Cream Blonde,” appeared in over one hundred and twenty feature films and short comedies beginning her film debut in 1926 with Fascinating Youth until her tragic death in 1935.  I’ve not been able to see all of them (some of her silents are regrettably lost—others aren’t as accessible as one would like) but I like to think I’ve made some headway…and the great thing about this is the ones I haven’t seen are, to further the “ice cream blonde” metaphor a little, going to be the cinematic equivalent of a hot fudge sundae when I do get around to seeing them.  I dearly love Thelma not because she was gorgeous (though she was at that)—but because she had an effervescent personality that leapt out from the screen, and she possessed both a keen sense of comic timing and a flair for physical humor that many don’t associate with great beauty (though it’s certainly not an uncommon phenomena—as actresses Carole Lombard and Lucille Ball demonstrate).  I’m saddened by the reality that I never got to know Thelma Todd and never will…but when I see this “funny lady” working her magic in classic movies, my heart skips a beat.
Posted by Ivan G Shreve Jr at 1:30 AM

It's odd to think that Thelma, with her outstanding comedic ability, wanted to be a dramatic star. It's true that we never see ourselves as others see us.

I have only seen the beauty queen's performances in the comedy shorts with Stan Laurel and Oliver Hardy. I have always wanted to see her performance in the 1931 version of The Maltese Falcon.

I wish that TCM would put together a DVD box set collection of her better known films.

Gosh, I love this woman. She had the art of playing comedy figured out from the start. I could watch her endlessly. Thanks for including her in this stellar round-up of funny ladies.

I am - regretfully - vastly unfamiliar with Todd's work outside the Marx Brothers films you mention. I must add her to my list as I make an effort to watch more silents and pre-code era films. You also reminded me I have CHICKENS COME HOME on my DVR and have yet to see it.

Hi! As a longtime fan, thank you so much for the detailed overview of Thelma Todd's career! I saw Whispering Whoopee for the first time recently and was in stitches the entire time! Miss Todd's tragic death sometimes overshadows her sparkling career. Thanks for giving her the attention that she deserves.

I must admit I've only seen Thelma Todd in HORSE TEATHERS and some of her shorts with Zazu Pitts and and Patsy Kelley, but you've got me eager to look up more of their work! Great post!

Almost all I know about Thelma I learned through an in-depth series of posts Page from My love of old Hollywood did.
Sure Lauerl and Hardy had a great group of comediennes under their wings!
Oh, and I have Monkey Business to watch soon, so I'll pay attention to Thelma!
Don't forget to read my contribution to the blogathon! :)
Greetings!

Must admit I haven't seen all that much of Thelma Todd's work, though I do remember her in 'Counsellor at Law' which is one of my favourites... but will watch out for more of her movies. Very interesting to learn more about her career.

I think it's so sad when tragic ends come to overshadow such talented performances. This post is such a lovely tribute to Thelma Todd, thank you for sharing!