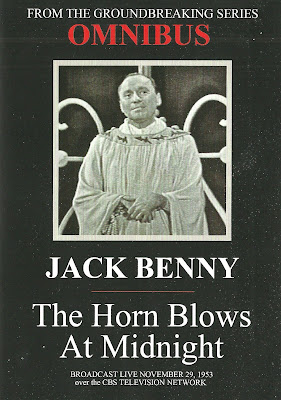 Over at the Radio Spirits blog, I worked up a review for the recent Shout! Factory release of The Jack Benny Program: The Lost Episodes.  Its official street date is July 23rd…but as I mentioned in this previous blog post, if you pre-ordered the set from the company’s website, a portion of those proceeds would be donated to The International Jack Benny Fan Club…and because I felt rather strongly that doing so was an extremely worthwhile endeavor, I went ahead and ponied up the full asking price (despite my usual tendency to haggle in order to get the best deal I can). 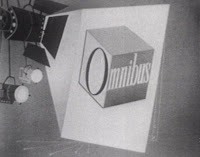 But what I forgot to mention—and I swear I didn’t do this intentionally; it just slipped my mind (memory is always the first thing to go)—is that if you purchased the collection directly from Shout! Factory they would throw in a bonus disc: a November 29. 1953 telecast (recently unearthed in the Library of Congress) of the highbrow Omnibus series featuring Jack performing a version of The Horn Blows at Midnight.

Any Benny fan worth his or her salt knows the significance of Midnight but since I’ve paid the rent on the hall, I might as well use it—The Horn Blows at Midnight was a 1945 fantasy-comedy feature film starring Jack as a trumpet player who dreams he’s an angel named Athanael, sent to Earth to blow the Last Trumpet that will signal the destruction of the planet.  Directed by Raoul Walsh, the movie—which would be Benny’s last starring role—did poorly at the box office; as was often the case with fantasy films—for example, Here Comes Mr. Jordan (1941), though now acknowledged as a classic, wasn’t a box office smash either.

Benny and his writers decided that when life gives you lemons, make lemonade—they used the poor performance of the film as fodder for jokes on his radio program, leading audiences to believe that Midnight was the equivalent of a stink bomb some prankster set off in the theater seats.  (If you’ve seen the movie, you’ll know that it’s actually an enjoyable little comedy—with some funny sequences and performances from the crème de la crème of many character greats.)  Because so many people heard Jack joke about how much he laid an egg with this film, they went back to the theater to see it out of curiosity…and that allowed to eventually break even.

Be that as it may, it was the gift that kept on giving as far as material for Benny’s radio/TV program went.  Here’s a good example: one of the shows on the Lost Episodes set is a telecast that features Robert Wagner and Natalie Wood as guests; Jack has ambitions of directing a production of Playhouse 90 with the two stars, and though “R.J.” is apprehensive, Natalie thinks Jack will do okay.  “After all, if I remember correctly,” Natalie reminds him, “didn’t Jack direct The Horn Blows at Midnight?”

As a janitor (played by Benny regular Benny Rubin) sweeping the floor comes into view, Wagner corrects his wife: “No, honey…he didn’t direct The Horn Blows at Midnight—he was in it.”

“I did,” snaps Rubin without missing a beat, as he continues to push his broom.  Later in the program, as Jack demonstrates how thoroughly inept he is when it comes to TV direction, Rubin the janitor attempts to make a helpful suggestion…but Benny waves him off, yelling “You had your chance!” The Omnibus telecast of The Horn Blows at Midnight is a definite curio—a chance to see Benny perform one of his most famous “works” in a live television venue.  The plot of the TV version differs a bit from the movie, of course (it’s based on the same radio script used on The Ford Theatre broadcast of March 4, 1949): Benny’s character is a legitimate angel and his mission is to blow that trumpet so Earth will be destroyed…but after encounters with a few humans on the planet he makes a plea to his superior (Lester Matthews) to spare everyone, and the production ends on a note of hope and optimism. 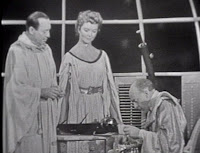 The Omnibus episode is a kinescope, so the quality is a bit iffy to say the least.  But it’s always a treat to see Benny, and you’ll recognize a few familiar faces alongside him: Dorothy Malone is his angelic girlfriend and Jeff “Alice” Donnell is a young woman who Athanael the angel takes an interest in (she’s having romantic troubles with her boyfriend, a musician who inadvertently takes Athanael’s trumpet).  Others include Byron Foulger, Rolfe Sedan, TDOY fave Ann Doran, Lou “Shorty the Barber” Lubin, Benny Rubin… 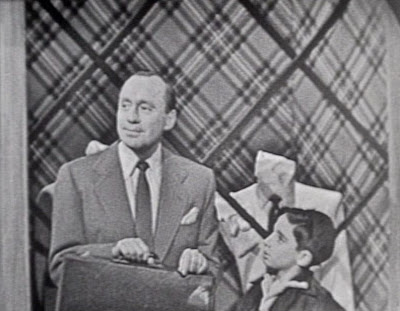 …and that youngster there is Harry Shearer, from his child thespian days.

I enjoyed watching the episode but I’ll be honest with you—you’ll probably get a bigger kick out of the original 1945 feature film (what with its memorable slapstick climax and all—a little out of reach for a TV budget)…which as of this writing still hasn’t received any kind of legitimate release (maybe the Warner Archive has bought into the myth surrounding the film).  Jack once observed: “When the horn blew at , it blew taps for my movie career.”  You’re one of the world’s preeminent funnymen, Jack…but I’ve never believed that statement for a second.
Posted by Ivan G Shreve Jr at 8:00 AM

Woah. That IS Harry Shearer. It's a kinescope from 27,000 years ago and the kid's in profile and you can STILL TELL.

The director gag is genius. I have to see this. Actually, I don't generally want a lot of DVD box sets lately, but this one and Dobie Gillis both look terrific.