The very “Model” of a successful Kickstarter project* 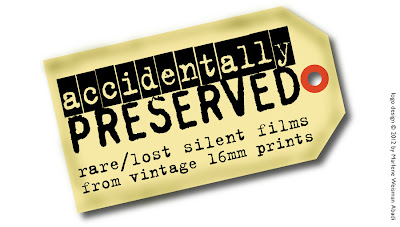 Back in November of last year, I wrote a post about a Kickstarter campaign entitled “Accidentally Preserved”—a project initiated by silent film historian-accompanist Ben Model to raise funds ($3,600) for the production of a that would showcase silent film rarities from 16mm sources…which, in many cases, are the only extant versions of these comedies and other novelties that have succumbed to both neglect and the ravages of time.  (As I said in the original post, Ben’s mission was to “get these films out of cans and onto peoples' screens so they can be enjoyed and studied.”)

For a pledge of $25 or more, you could make a little film preservation history by seeing this project to fruition—and you’d also get a mention in the closing credits…


…the DVD shipped a week or two back, and is available through the MOD Create-A-Space at Amazon.com.  It’s gotten some nice write-ups from good movie folk like cartoon guru Jerry Beck and critic Dave Kehr, as well as other influential blogs…and seeing as I finally got the opportunity to sit down with it Sunday night and early Monday morning, I thought I’d offer up a few Thrilling Days of Yesteryear impressions of the disc.

It’s extremely well-produced, for starters—a lot of time, effort and professionalism went into the making of this .  A major plus is that a lot of info about the shorts on the disc is included on screens preceding each presentation…and in the case of three of the shorts—The Lost Laugh (1928; with Wallace Lupino), Wedding Slips (1928; with Monte Collins) and The Water Plug (1920; with Billy Franey)—Ben and silent film historian Steve Massa (author of Lame Brains & Lunatics, just released by BearManor Media) provide audio commentary choc-a-bloc with tantalizing tidbits of history for silent comedy geeks like me.

A good bit of the DVD's content consists of one-reel “Cameo” comedies—these one-reelers were distributed by Educational Pictures (“The spice of the program”) as a companion to their two-reel “Mermaid” comedies.  I’m going to go on record here and say that while one-reel comedies aren’t my particular cup of Orange Pekoe (I tend to agree with historian David Kalat, who once opined that one-reel shorts are “the ugly stepchildren of silent comedy”) the more of them I watch, the more I’m being won over.  If a one-reeler has particularly strong gags—like Preserved’s Cheer Up (1924), which features an almost forgotten comedian named Cliff Bowes—I’ll generally overlook the shortage of time to develop character.  (Bowes’ Cheer Up has a riotous bit where he’s spun around and left upside down when his rival attacks him with a hand drill.)  I also enjoyed a comedy on the entitled Loose Change (1928), starring Jack Duffy as a thrifty Scotsman who solves his reluctance to take cabs by employing a bit used by Harold Lloyd in Safety Last (1923)—bumming a ride from an ambulance. 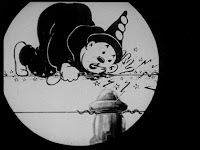 There are additional items included on the Accidentally Preserved disc besides silent comedy: The House of Wonders, a two-reel industrial short from 1931 touting Elgin watches (you might be familiar with Elgin as the people who sponsored Groucho Marx’s You Bet Your Life before he started telling prospective DeSoto customers “Tell ‘em Groucho sent you”) and an Out of the Inkwell cartoon from 1922, Mechanical Doll, which will be of major interest to animation buffs (they really are inventive cartoons, and Doll is no exception).  Three Stooges devotees will be intrigued by a one-reel Monte Collins comedy, Wedding Slips (1928), directed by future Columbia Shorts Department head Jules White.  This comedy is also an example of how fragile many of these treasures are: the emulsion of this print started to buckle a few months before the went into production and a transfer was made in the nick of time (the decomposition is noticeable in the main titles and in the last few minutes of the short).

In his write-up for Accidentally Preserved at the Paper of Record, Dave Kehr remarks: “This compilation is aimed at specialists, but it is a sterling example of the kind of home-brew work that is now possible in film preservation, and where much future effort will doubtlessly lie.”  If you’re as passionate about this as I am, maybe you can shift some of those funds you were planning to pony up for that Zach Braff movie (seriously—a follow-up to ?) towards the eventual sequel (Accidentally Preserved II: Texas Blood Money), which I will keep you posted about when it is announced.  In the meantime, you can purchase the original disc over at Amazon…and take it from me, it will be money well-spent.  There’s additional information (including notes on the films) at the ’s website.

*I took liberty with Ben’s last name to make a small pun; it’s actually pronounced “Mow-dell”...like the Paul Reiser character in Diner who kept glomming onto every one’s French fries.
Posted by Ivan G Shreve Jr at 8:00 AM