I forgot my anniversary! 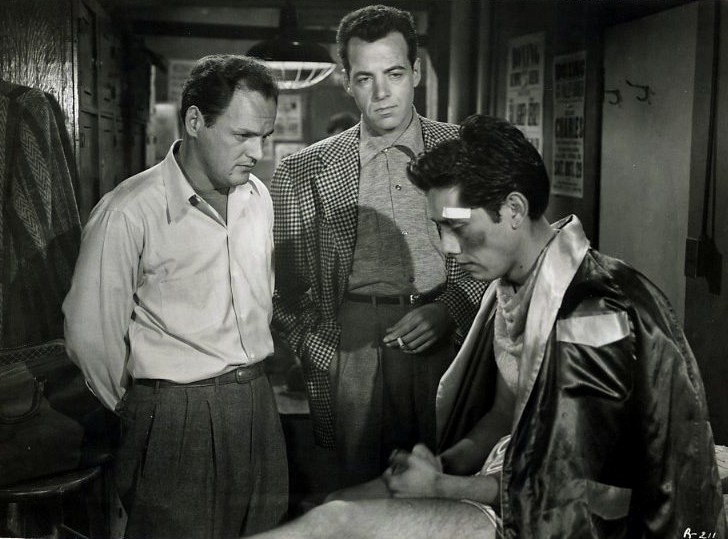 Yes, if this were a sitcom—I’d be doing some pretty wacky things right now to atone for this fox paw…but since this is real-life, I’ll be doing some…okay, maybe there’s not much difference between my casual existence and a half-hour of canned laughter.  The anniversary that slipped my mind occurred several Saturdays back (May 25); a year ago on that date I composed the first entry on the Radio Spirits blog (an anniversary piece on Suspense’s “Sorry, Wrong Number”).  Fortunately for me, RS’ management has picked up my option and I’m still contributing pieces of interest—like this one (don’t think I didn’t hear you grumble “He’s tricked us!”) commemorating today’s birthday boy, Gerald Mohr.

I’m hoping to be able to keep to a fairly regular blog schedule in the coming months…and I want to thank one and all for the interest and positive feedback on our new feature, Doris Day(s) (though I have a sneaking suspicion it won’t last long).  I’m also planning to cobble together a Coming Distractions soon that will take a peek at what’s in store for -philes in the month of July. 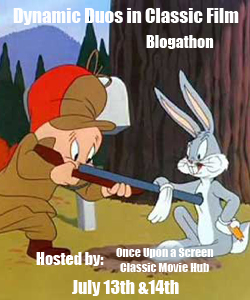 Speaking of July (smooth as glass), Thrilling Days of Yesteryear has already made comments to three, count ‘em, three blogathons that will be in full force during that month.  First on the schedule, blogathon queen Aurora at Once upon a Screen will team up with the folks at the Classic Movie Hub to toast Dynamic Duos in Classic Film from July 13-14.  “Dedicated to perilous, precarious and personable pairs” as the press release alliterates; the personalities chosen will run the gamut from romantic to adversarial, professional to familial (as in siblings).  TDOY will contribute an overview of the career of one of its favorite comedy teams, Dean Martin & Jerry Lewis…and the assignment will, of course, require me to revisit some of the wacky duo’s vehicles.  (And…loving it!) 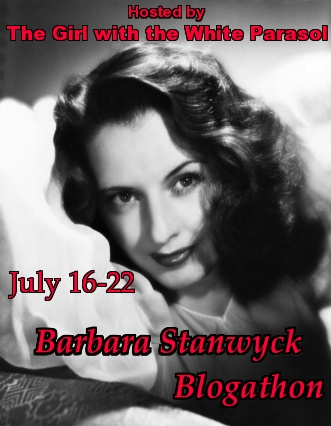 When Blogathon closes a door, s/he opens a window; two days later on July 16, Aubyn at The Girl with the White Parasol will kick off The Barbara Stanwyck Blogathon—a week-long event (ending July 22) celebrating the filmography of the woman born Ruby Stevens on July 16 one-hundred-and-six years ago in Brooklyn.  There’s a rich catalog of movies waiting to be mined in Babs’ career, so skate on over to Aubyn’s and stake your claim (skate and stake—sounds like a restaurant chain) ‘cause it’s first come, first served, cartooners.  If I may quote Aubyn: “I know that we all love Double Indemnity and The Lady Eve, but I want this blogathon to be about the entirety of Stanwyck's career, not just her most famous films.”  Well, not all of us love The Lady Eve (the movie, that is, not the blogger) but I’m certainly hep to what she’s asking.  I wanted to do either The Lady Gambles (1949—“The Lost Weekend of gambling films”) or The File on Thelma Jordon (1950) but since neither of these titles currently reside in the TDOY library (Gambles and Jordon are both on but I’m supposed to be behaving myself…more on this in a sec) I went with Sorry, Wrong Number (1948)—a movie that safely resides on another shelf here at Rancho Yesteryear, far away from The Disappearing Vortex that is currently inhabiting my bedroom. 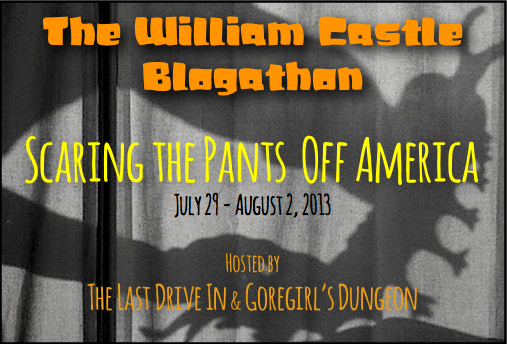 And wrapping things up in July (July 29-August 2, to be exact) MonsterGirl at The Last Drive-In in tandem with Terri of Goregirl’s Dungeon will scare the pants off the blogosphere with a tribute to (love this) “the P.T. Barnum of Classic B-movie fanfare,” William Castle, via (what else?) The William Castle Blogathon.  I got word of this from Monstergirl (Joey) on the Twitter machine, and I lucked out in that no one had scooped up one of my favorite Castle flicks, I Saw What You Did (1965)…so I’ll be reviewing that one in this space, provided it hasn’t disappeared into the Vortex.  I am really looking forward to this one, by the way—Castle is one of my movie heroes.

A couple of quick TV-on- announcements that will be of interest to classic TV fans…and while I realize that this first one is a little out of our usual bailiwick, you’ll be interested to know (if you haven’t already learned it from TVShowsOnDVD.com) that the long-awaited Mama’s Family is coming to DVD this September 10th.  (Hey…easy with that kind of language, will ya?)  The first season of the popular network (and later syndicated) sitcom was released to disc in September 2006…and there was soon an outcry from its fandom because the episodes on the set were the syndicated versions (and we all know that The Powers That Be cut three minutes from every show so we can benefit from more commercials); when Family devotees threatened to storm the stronghold that is Warner Home Video the company explained that they had the rights to only the syndicated versions. 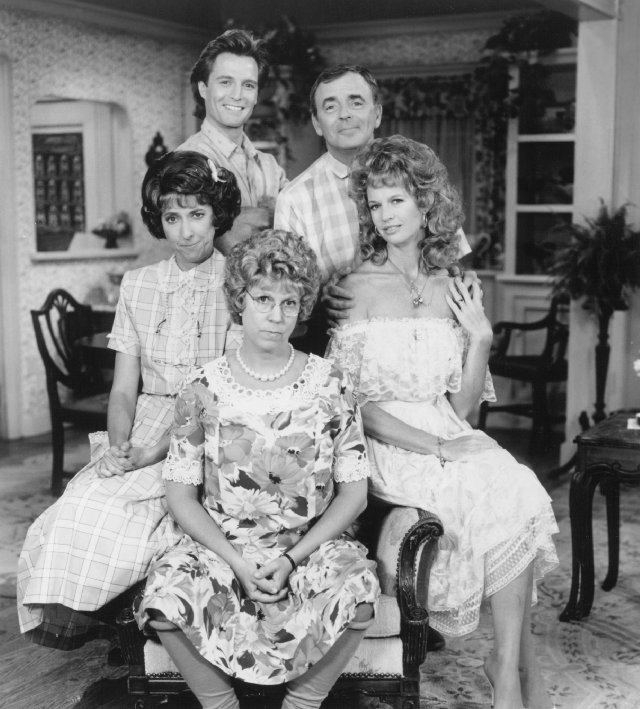 There was a long drought after that for more Mama’s Family releases—since the rights were tied up for several years by Joe Hamilton Productions (Hamilton being the one-time spouse of Carol Burnett, on whose show Mama’s Family originated in 1974).  Now comes word that all six seasons will be eventually released by StarVista Entertainment (formerly Time-Life) in a big honkin’ box set in an online promotion (there is still some fuzziness as to whether Seasons 1 and 2 will be released separately).  You can get the full skinny on this at TSOD, and the only reason why I mentioned it here is because I’m pondering the kind of country we live in where we will have access to Mama’s Family…and not Mayberry R.F.D.  (Then again, if a show doesn’t involve Ken Berry tripping and falling at an U.S. Army post in the Old West, I probably don’t want to watch it again.) 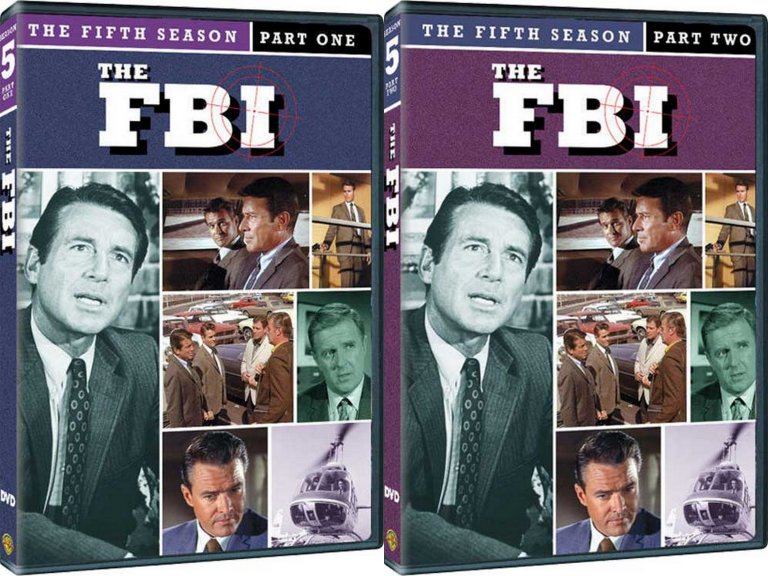 Last week (June 4), the Warner Archive released the fifth season of The F.B.I. to (all 26 episodes from that season in two volumes priced at $49.95 )…and believe me, I would very much like to purchase some of the Archive’s TV product—but they’re not making it easy for me.  Doing the work of Satan, they insist on dropping e-mails in my box touting fabulous classic movie sales…all I have to do is get a glance at one and we’re off to the races.  (Recent purchases include Kentucky Kernels, The Window, While the City Sleeps, Rio Rita [1942] and The Gangster.  I have no resistance.  I also bought that long-wanted Shout! Factory Barney Miller box set via a smashing Amazon Gold Box Deal discount on Sunday…but keep that under your hat.)

Speaking of the Factory, they’re going to make things a little easy for collectors: their gi-normous The Many Loves of Dobie Gillis collection will hit the streets on July 2, but if you haven’t managed to dig up enough change in the couch cushions to grab this one they’re going to give you the opportunity to stick your toe in gradually…with the release of the Dobster’s first season in a 5-DVD set ($29.93 ) this September 10th.  I think you’ll agree that for the budget-minded individual, this is not a bad way to go. 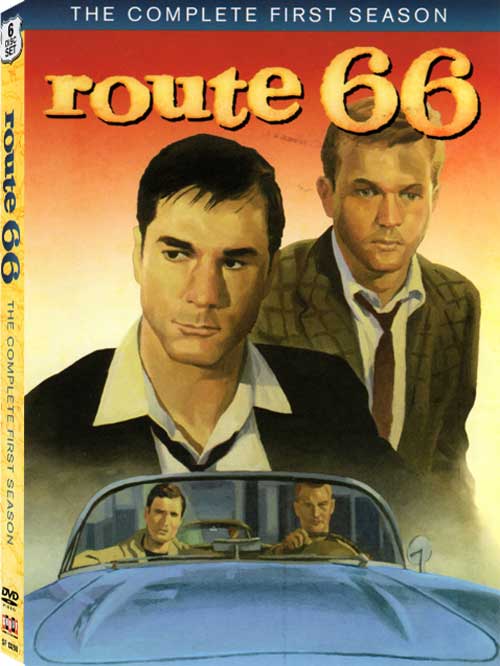 The Factory is also going to re-release the first season of Route 66 in a six-disc set that will also for $29.93 with a street date of September 3.  The company previously released the entire series in May of 2012, and Infinity Entertainment also issued Season 1 in a set brought out in 2007/2008 (but you’ll get the opportunity to pay less for it, you lucky people).

Congrats on your blogiversary! I love your pieces (and Radio Spirits, too). Keep 'em comin'!

So you're the fella who snatched I Saw What You Did away from me!...I thought for sure no one was going to put dibs on that film. We're stuck ( ahem, I mean privileged ) to be writing about the publicity that Castle did to promote all of his films. See, when you can't pick one title for a blogathon, you get them all!

So you're the fella who snatched I Saw What You Did away from me!

Your plight has touched me, Sisters of Metzinger. I told Monstergirl that I'd switch to Castle's first feature film, the Boston Blackie The Chance of a Lifetime...because I can find that one a lot easier than I Saw What You Did. So if you want to let her know you want to do it, go on over and sign up.

Oh darn, just when I dubbed you Ivan the Terrible you turn nice. Don't you hate it when vile villains end up being good-fellows at the end of the picture?

Actually, I was looking forward to reading your take on I Saw What You Did. ( I was just playing fickle ) We won't officially snitch the film from you but if I got nothing up my sleeve in July I may throw some comments out about the movie regardless. It's just too campy to resist!