And then along comes Mary

Thanks to everybody who left approving comments for my Radio Spirits piece of yesterday—namely, the review of the Shout! Factory release The Jack Benny Program: The Lost Episodes.  I’m sure no self-respecting Benny fan will want to be without this collection so if you haven’t put one in your shopping cart yet, do so at your earliest opportunity. 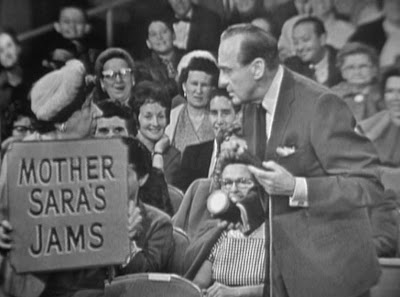 I mentioned in the review that one of my favorite shows on the set is a telecast that is sans big-name guest stars; just Jack and his regulars (Don Wilson, Dennis Day, Eddie “” Anderson).  At one moment during the show, Benny ventures out into the audience and chats with a few of the people watching the performance; some of them are real people like you and me, to paraphrase Lily Tomlin’s Judith Beasley, but a few of them are those marvelous character thesps that the show used whenever they could.  One encounter involves Jack and actress Jesslyn Fax, who made multiple appearances on the show (usually as a member of Jack’s fan club).  On this show, she plays a little old lady who gives Jack a jar of preserves as a gift…then tries to hijack the proceedings with a pitch for “Mother Sara’s Jams” that has the familiarity of a Jell-O commercial (“Strawberry, raspberry, orange…”) 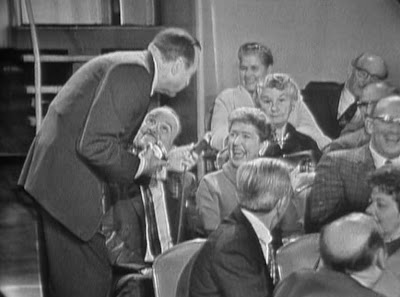 Jack talks to a few more audience members, and then he encounters his nemesis Frank Nelson—who, as you know, always played the one guy who hated Jack Benny.  Maybe it’s the spirit of the season but Frank saves his animosity for the end of the show—for now, he’s genuinely enjoying himself (“My palms are red from all the applauding!”).  He introduces the woman sitting next to him as his wife, and when Jack asks the woman if she really is his wife she screams: “Oooooooooh…am I!”  This is funny in itself, of course…but the in-joke is that the actress is our dear friend Mary Lansing (the long-suffering Martha Clark on Mayberry R.F.D.), who was married to Frank Nelson at the time. 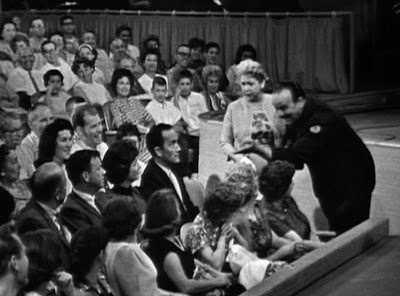 Mary turns up in another one of the shows: a telecast with the Reverend Billy Graham as guest.  Jack and Dennis are discussing Dennis’ song when the show is interrupted by Frank and a few people who didn’t get seated before the show started.  (You can see Mary standing there beside her husband; she asks if he can work the logistics so that she’s sitting next to her fake husband in the skit.)