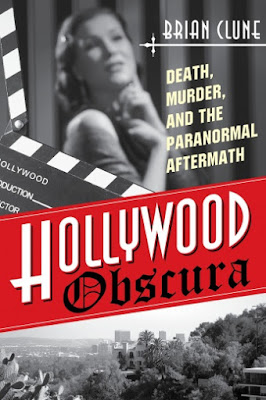 Thrilling Days of Yesteryear goddess Thelma Todd had her motion picture career cut short by a mysterious death in 1935 that continues to mystify fans and provoke endless speculation even today.  Was the “Hot Toddy” murdered…or was her death merely a tragic accident?  There is no shortage of suspects for the murder theory (her ex-husband Pat DiCicco, business partner/lover Roland West…even mobster “Lucky” Luciano) but however you choose to explain Thel’s demise there’s certainly no argument that we lost a truly amazing talented actress-comedienne.

After Todd’s death, many witnesses have claimed to see her spirit floating around her old haunts (pardon the pun): the building that housed her restaurant, Thelma Todd’s Sidewalk Café, is the site of several sightings, in addition to the garage where her body was discovered, presumably after passing out from the deadly carbon monoxide resulting from her Lincoln Phaeton running inside.  (Not to mention a few bruises of unexplained origin.)  There are even reports that the yacht once owned by Roland West, the Joyita, has a rather cursed history—linked to Thelma’s demise (there are those that speculate that possible murderer West croaked Thelma on the boat before bringing her to the garage and setting it up to look like an accident).  If you have a strong interest in the supernatural, you’re going to enjoy reading Brian Clune’s Hollywood Obscura: Death, Murder, and the Paranormal Aftermath—a book due out this month that examines a handful of Tinsel Town deaths (George Reeves, Marilyn Monroe, Ramon Novarro, etc.) in page-turning detail and relates accounts of folks spotting these celebs still tooling around despite a change of address in The Great Beyond.

Speaking for myself: I’m a tremendous skeptic when it comes to the paranormal.  To paraphrase Bert Lahr’s Cowardly Lion: “I don’t believe in spooks…I don’t believe in spooks…I don’t, I don’t, I don’t.”  So I was a little leery about the ghost aspect of the book…but even those who remained unconvinced about such phenomena will enjoy Hollywood Obscura, a refreshing read by an author whose other works include California’s Historic Haunts (co-written with Bob Davis) and who’s contributed to such TV shows as Dead Files and Ghost Hunters.  Brian Clune is also the co-founder and historian of Planet Paranormal Radio and Planet Paranormal Investigations, the website for which can be found here.  His book is well-documented, and I was particularly tickled by the fact that he drew on material from some of my fellow classic movie bloggers including fervent Shirley Temple disciple Page at My Love of Old Hollywood (where a lot of the Thelma Todd biography was borrowed—odd, in that I’d think Pagey would be a natural for Ramon Novarro) and the now-defunct The Silent Movie Blog, once owned and operated by Facebook compadre Christopher Snowden (now blogging at Television Diary).

Hollywood Obscura isn’t all about celebrities.  It features chapters on would-be celebrities, like the legendary Black Dahlia, and some semi-celebs who achieved fifteen minutes of fame, as in the case of the notorious Manson family.  There’s even a section on the infamous Los Feliz “Murder Mansion,” a case whose particulars I was not familiar with, so it made for a pretty riveting read.  Rounding out the book are chapters on “Bugsy” Siegel, John Belushi, Tupac Shakur/Biggie Smalls, and recent TCM Star of the Month Natalie Wood.  (Since I’m one of those people convinced that Wood’s husband—Robert Wagner—introduced Nat to a deeper part of the ocean, I don’t mind telling you I was a little uncomfortable watching R.J. and daughter Natasha Gregson Wagner chat it up in between those Wood movies showcased on The Greatest Cable Channel Known to Mankind™.  But I digress, even though this theory of Wagner's possible complicity is touched upon in the book.)

Hollywood Obscura is a most diverting tome, one you’ll navigate it very quickly (I took it with me when my fadduh had to have some tests done at Athens Regional and had it finished by the time they were done poking and prodding him) while being thoroughly entertained all the same.  Published by Schiffer Books, a family-owned independent based out of Atglen, PA, Hollywood Obscura is also available from fine bookstores (Barnes & Noble) and those not so fine (you know the behemoth I’m talking about).  Many thanks to Meghan Schaffer for sending the review copy my way.