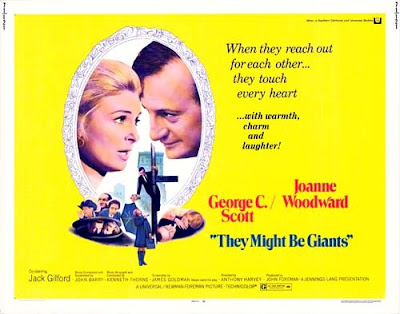 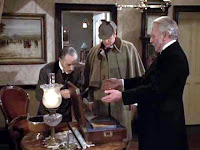 As a Sherlock Holmes fan, I’d always viewed They Might be Giants (1971) as a variation on a theme, bringing the Master Detective into present day by means of a mentally deluded person channeling Holmes. I remember first seeing it around the same time as a made-for-TV movie featuring Larry Hagman as a motorcycle cop who comes believe he is the World’s Greatest Detective after receiving a conk on the head. Consequently, They Might be Giants never impressed me much. Now, many years later, I feel more justified in that assessment.

The movie is the story of the growing relationship between Justin Playfair (played by George C. Scott) and Dr. Mildred Watson, portrayed by Joanne Woodward. Playfair, a wealthy retired judge, suffers a break from reality following the death of his wife, and comes to believe he is Sherlock Holmes. He lives under the car of his brother, Blevins (Lester Rawlins) and his wife, Daisy (Rue McClanahan).

But all is not well. The philandering Blevins is being blackmailed, and hits upon the idea of having his demented brother committed so he can take over his money and pay off his blackmailer. Despite Justin’s delusion, he will not hear of it, choosing instead to track down said blackmailer, whom he is certain is none other than that Napoleon of Crime, Prof. Moriarty. Unfortunately, this only adds credence to the case that Justin needs professional treatment.

Enter Dr. Mildred Watson, a dedicated psychiatrist who is fascinated by Justin. With a name like Watson, you would think she would be the logical choice to feed on the man’s eccentricities, but it’s not until their second meeting that Justin blatantly points out the irony of her name and profession. Methinks it’s something that should have occurred to the schemers earlier.

Under Mildred’s observation, Justin then begins following up an assortment of random clues, interpreting them brilliantly (though wrong), and what we the audience witness is an extended date between these two fractured people. Justin displays Holmes’ deductive reasoning, and discerns that Mildred’s personal life is a mess. But thanks to Justin, she soon becomes a more fully-realized human being. 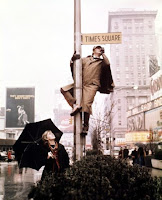 Justin is not a threat to himself or others, but he is surrounded by any number of eccentrics who are indifferent to his questionable grip on reality. But that’s because they themselves are damaged in some way. The story deteriorates into a simple good (crazy) vs. evil (sane), the for me being Justin’s explanation of the appeal of Westerns.

The title has its roots in the story of Don Quixote, explained when Justin says, “He thought that every windmill was a giant. That's insane. But, thinking that they might be, well... All the best minds used to think the world was flat. But what if it isn't? It might be round. And bread mold might be medicine. If we never looked at things and thought of what might be, why we'd all still be out there in the tall grass with the apes.”

The film was written by James Goldman, based on his play, which explains why some scenes appear to be taken directly from the stage script. The ending is less than satisfying, as there is no firm resolution. Will Justin and Mildred stay together, or will he be committed? Will Blevins go to jail? And what of Justin’s entourage? Will they make the necessary emotional adjustment to this crazy world? Do they even need to?

None of the plot points are ever fully answered. Instead, the audience is left to wonder “what might be.”
Posted by Ivan G Shreve Jr at 7:00 AM

I like this movie quite a big. Glad to see it remembered here.

I'm a big fan of this movie, mostly for the performances by the two leads. I think it's Scott's best-ever performance actually.

Disinvite this guest--shallow, superficial review. Anytime I hear someone complaining about an open ending, I know there is a problem.