I reached into the prize drum and…

…pulled out a winner in Dennis B. from , who can now brag to his friends and neighbors that he is the proud owner of a copy of the Mill Creek Entertainment collection Dark Crimes, generously donated to us here at Thrilling Days of Yesteryear by media rep Barbara Pflughhaupt.  Congratulations to Den and my only regret is that I wasn’t able to give out copies to everyone who entered since I had a really good response to this one, but I think the Mill Creek people probably want to sell a few copies.  Let me just state that it’s well worth the investment, and if you use the discount code on this page you can pick it up for “a mere bag of shells,” as The Great One often said (it's good until May 31).  (Barbara has even suggested we do another promotion like this in the near future, something with which I would be totally on board.)

I guess you can think of this post as a sort of “Wednesday’s checklist”—I regretfully didn’t get an “Overlooked Films” post up yesterday due to a couple of last minute deadlines but I am working on today’s B-Western feature and hope to have that completed this afternoon.  I mentioned last week that I was honored to be asked to join the roster of fine classic film writers at The Cinementals but I have also recently been at work fashioning some pieces that will be published at Radio Spirits’ weblog, something which I am very excited about.  (One of the projects that I was attempting to finish up yesterday is RS-related, and I will have more details on that forthcoming.)

TVShowsOnDVD.com had an interesting press release up last week that announced the acquisition of Timeless Media Group by Shout! Factory—and since I have long considered both of these companies to be the ne plus ultra where TV-on-DVD is concerned, I’d like to wish both of them success in their merger.  In fact, one of the company’s future releases (no street date has been announced yet) will be a 12-disc set entitled Peter Gunn: The Complete Series, which will contain all 114 episodes of the cult private eye series (created by Blake Edwards) starring Craig Stevens, Lola Albright and Herschel Bernardi…and will also include a CD of the show’s music composed and conducted by Henry Mancini.  (Those of you lucky to get Me-TV are probably familiar with the series, which is shown in the wee insomniac hours of the morning on weekdays.)

With his typical flair for understatement, Mr. David Lambert notes of this news: “There have been sets released of this show before, but never to completion...unlike this one!”  (Here’s a riddle: what has two thumbs and has already purchased the Region 2 copies of Seasons 1 and 2 of this show?  This guy!)  Oh, well…whaddya gonna do…stuff happens. 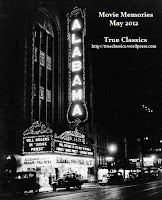 Finally, I mentioned in an earlier post about the “Movie Memories” event currently underway this month at one of the best classic movie blogs on the web, True Classics.  This morning, the proprietors—Brandie, Carrie, Nikki and Sarah (aka The Marx Sisters)—graciously allowed me to go on a bit about my earliest film influences and as Brandie joshed on Facebook, it “reveals the origins of his madness...I mean, the roots of his classic film fanaticism.”  (Yeah, she had it right the first time.)
Posted by Ivan G Shreve Jr at 12:00 PM

I've just started watching Peter Gunn on RTV a few weeks ago, and I have a question about it that you might be able to answer.

Did ANY part of ANY episode take place in the daytime?

Did ANY part of ANY episode take place in the daytime?

Barry, if there is an episode like this--I've not come across it yet. I've long suspected Peter Gunn was a vampire. :-)

Thanks for the praise--you're too kind, sir--and for writing such a wonderful post for us! We have been lucky to get some really great writers and film fans to play a part in this event, and I'm not exaggerating when I say that yours is one of my very favorites from an entire month's worth of contributions.

I'm going to show my age and let you know that I saw at least one of the late seasons of "Peter Gunn" as a pre-school type child. Say what you want but Craig Stevens as Peter Gunn has to be high on the "Coolness scale," at least on TV.