Due to circumstances beyond my control...

…I had to abandon this week’s Overlooked Films post.  I got preoccupied with a project earlier this morning and by the time I finished completing what I set out to do I was just not in the mood for anything that involved me watching a movie and then thinking of something witty to say about it.  This has happened often in the past, and I thought that I had thoroughly wrestled that problem to submission but it would appear that I still have miles to go before I sleep.

A week or two ago, the ‘rents got a look at the most recent of our cable bills and noticed that CharredHer had decided to raise our bundle rate to roughly the size of the national debt.  After having a brief meeting to discuss the problem, we formed a committee of one (me) to look at two proposals.  The first (endorsed by Mom and Dad) involved switching from our current service to AT&T U-verse.  The disadvantage to this would be that I would have bid my fiancée Me-TV a sad fare-thee-well (and also my mistress Antenna TV)…plus I would have had to spend precious time resetting the wireless router, something I was not particularly looking forward to with relish.  Todd at Sweet Freedom did explain to me that it would be possible to get these two stations with the aid of a antenna but I’m not completely positive about the signal strength, and I’d hate to invest in something like that without being 100%.  The only advantage to U-verse would be that I would at least be able to watch The Greatest Cable Channel Known to Mankind™ on my bedroom TV.

My proposal was that we jettison the landline telephone part of the CharredHer bundle—which my Mom has been wanting to do for sometime now—and eliminate one of the tiers on the cable service…something that was received quite favorably when I suggested it during dinner.  My dad was a little verklempt when he learned that he would no longer have access to “The Hitler Channel,” as ClassicBecky calls it, but other than that he was a brave soldier.  I thought I was the actual winner in this deal because not only did we get to keep the classic television channels but TCM is intact, too.  TCM used to be on Channel 52 on the cable lineup but they moved it into the upper tiers sometime back…and apparently recognize it in the basic tier package. 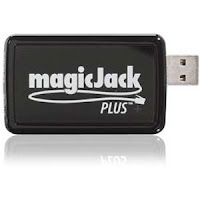 We really weren’t too concerned about the phone situation because my Dad has a cell phone (the fact that he has one and I do not is one of life’s little ironies) and he had planned to put Mom on his account to get one as well…but yesterday, he decided to invest in a Magic Jack and he picked one up at a Radio Shack here in Athens.  I was hoping my name would not be on the assignment sheet to install this…suffice it to say, I was doomed to disappointment.  He hands me the MagicJack apparatus and instructions, telling me to install it in my own free time…and then proceeded to ask me every hour upon the hour if I had read the instructions yet.

So I put the doggone thing together this morning—and I know what you’re probably thinking: “It couldn’t be that hard…”  But you need to keep in mind that a) I am technology-challenged, and b) there’s never a fershlugginer extension cord available in this house when you need one.  (I didn’t come across such a cord until the last box I looked in…because I am rarely fortunate to look in that box first.)  After I had it installed (and figured out the reason why it didn’t seemed to be working was this crappy telephone that we’ve had since Alexander Graham invented them) I am pleased to report that the halftime score is Technology 7, Ivan 3.  Rest assured, I will have things back to normal with our regularly scheduled B-Western Wednesdays tomorrow.
Posted by Ivan G Shreve Jr at 3:45 PM

proceeded to ask me every hour upon the hour if I had read the instructions yet.

I'm starting to think your dad was my dad's younger brother.

Have you considered DirecTV?
As long as you don't want the Premium channels like HBO & ShowTime, you can get East & West Coast feeds of the networks (ABC, CBS, NBC, Fox, WB) which comes in handy since, if you miss something, you can catch it again three hours later!

Guess what Ivan, we are going through this mess too. I'm without TCM until sometime next week.. Thankfully, I have a husband to figure out this stuff..

I also wanted to stop by and thank you for your support during my illness.. It really helps in my recovery. Hugs to you..

Yowsa, all this is conspiring to make Verizon look not so bad in comparison, something I wouldn't've thought possible...catch you next week...(and, of course, you can invest in the antenna and try the local signal clearance of the broadcast affiliates without giving up on any cable...and keep the receipt in case your local signal strength is essentially nil, for return...)