“Please excuse Ivan from the blog…he was sick at home…”

Since I’ve already gotten word that a few people have organized a search party to look into my disappearance for the last seven days, I would like to take this moment to apologize for letting the lights on the blog go dark this past week.  I could go through the usual gamut of excuses—“My dog ate the Internet,” etc. but I have a legitimate absence (and a note from Mom) this time…I’ll try to fill in some of the details without getting too graphic.

There was a time in my young life when I was invincible when it came to eating…and because I’ve never really been a “breakfast-y” kind of person (I have sort of come around as I’ve gotten older) I would often select items from the menu that are not normally associated with the first meal of the day.  For example, before fast food places hopped on the McMuffin bandwagon there was a time in this country when you could order a hamburger for breakfast and no one would blink twice…now you have to wait until in the am before they “start serving lunch.”  (There are still places you can go where this is possible—Denny’s, IHOP, etc.—but it’s just not the same.)  I remember a time from my youth when my family was on vacation somewhere out in the Midwest (I’m thinking around Illinois) and we went to this greasy spoon where you could actually order a chili dog for breakfast…which I think may have sparked my lifelong breakfast irresponsibility.

Anything in the fridge that needed to be tossed fairly soon was fair game for breakfasting during my carefree bachelorhood days—and among the food items frequently chosen was cold pizza, something that became as familiar to me as…well, as toast, juice and coffee to the average person, I suppose.  Last Wednesday, we had a few pieces of leftover ‘za in the fridge (from the Transmetropolitan, the best place in the to get a slice) here at Castle Yesteryear and so I decided to have a couple as the first meal of the day. 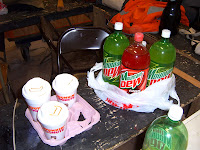 Alas…I am not a young man anymore.  My days of getting by on donuts and Mountain Dew for breakfast are behind me, but every now and then my body needs to remind me of this…and it generally does so in a rude fashion, far beyond nudging or loud throat-clearing.  The pizza bestowed upon me intense abominable abdominable tummy ache that literally felt like a couple of the neighbor kids were playing jump rope with my intestines.  This lasted well unto Sunday morning, when my system finally decided it had finished giving my body the equivalent of a swirly and found some other kid to pick on.  I was pretty sore from the experience and so I needed to rest up a couple more days (I had planned to get a Mayberry Mondays up on that same day, but a last-minute babysitting session with my nephew put that on the backburner).

I continue to argue that the pizza gave me a mild bout of food poisoning; mostly because of the excruciatingly painful stomach cramps…my mother has a dissenting opinion, probably because she loves pizza and doesn’t want us to give up eating it anytime soon.  (It’s possible she is correct about this—I’m not a doctor, though I do find I get free drinks if I tell the bartender I am.)  Nevertheless, this experience has left me a sadder but wiser individual…and I think there’s a lesson for all of us to learn here.

But I’ve remembered that I needed to announce a winner in Thrilling Days of Yesteryear’s That ‘70s Show giveaway…and I’m pleased to reveal…that there wasn’t one.  I had one person enter the thing, and since he had already won one of the previous contests I sort of had to eliminate him as a contestant.  So I have set Seasons 3 and 4 on a shelf for another time…and I’ll also announce another contest later today (I’m hammering out the details right now, in tandem with an “Overlooked Films” post).

For those of you who missed the regular features last week—my humblest apologies.  I’m going to do whatever I can to get back on track but I will warn you in advance that I’m facing a deadline on an outside project and if it turns out I can’t juggle the two I may have to jettison blog stuff.  Once again, thanks to all who e-mailed to make sure I was okay.
Posted by Ivan G Shreve Jr at 11:15 AM

Hey, Ivan, I'm sorry to hear you've been having tummy trouble! I can certainly sympathize, since I discoverer in my late 30s that I couldn't chow down on junk food with wild abandon without getting literally sick to my stomach. I also found a name for my pain: gluten! When I got tested, my doctor diagnosed me with gluten sensitivity, as opposed to full-blown celiac disease, which is way worse. Either way, you have to nix foods with gluten, but luckily, nowadays there are plenty of delicious and even nutritious gluten-free goodies available, even pizza! In any case, good luck, my friend!

I know how you feel, Ivan. I recently discovered, to my astonishment, that yes, eight ounces of cheddar per day, or so, for about a week, can have bad effects. Such a thing as too much cheese? I had not previously conceived it. But the department of my interior certainly had.

Ivan, I hope you and your tummy are on the mend.. Please change your diet. Oatmeal with blueberries makes a wonderful breakfast.. Even, peanut butter on an English Muffin is good. Or.. how about a smoothy and pretend it is a milk shake. Sorry, if I sound preachy, but.. the mother in me could not be stopped :)

I also found a name for my pain: gluten! When I got tested, my doctor diagnosed me with gluten sensitivity, as opposed to full-blown celiac disease, which is way worse.

My cousin Janice suffers from the same ailment. When she, my sister and a few other members of the Shreve cousintude got together for my Uncle Don's funeral they all had lunch at a place that had nothing--nothing!--gluten-free on the menu.

I recently discovered, to my astonishment, that yes, eight ounces of cheddar per day, or so, for about a week, can have bad effects.

By the time I read this, I had just finished a leftover chicken-and-cheese enchilada for lunch. You really know how to worry a guy, Andrew. :-)

And Dawn gets the last word:

Please change your diet. Oatmeal with blueberries makes a wonderful breakfast.. Even, peanut butter on an English Muffin is good.

Before moving back in with the 'rents, peanut butter on an English muffin was my breakfast of cherce. Now I can't get Mom to make it (peanut butter revolts her). So Dawn is now my new mom.

Sorry to hear about your gastrointestinal hijinks. Twice this week I started an email and then forcibly stopped myself, because I've bothered you so many times in the past for no reason... and of course THIS time was the one time I should have mailed. I'm telling you, my *dar is shot.

I'm not a breakfast person, either, mainly because I just cannot stand the stuff usually served for breakfast. Orange juice, eggs, oatmeal, pancakes... bleah. But I have an unhealthy passion for healthy cereals, strangely enough. It's the milk I can't have anymore, but almond milk (or juice as Lewis Black would say) does the trick.

The nutrition teacher I used to work with when I taught at a junior high was a big proponent of thin crust pizza for breakfast.

It was food poisoning, Ivan. Stop eating leftover pizza! Glad to hear you made it through.

It was food poisoning, Ivan.

That seems to be the consensus reached after conducting a quick poll among TDoY readers. (Mom continues to argue it was not.)

Speaking of Mom, I was able to guilt her in major fashion (thanks to Dawn) and get her to make me a peanut butter bagel the other morning. High fives all around!