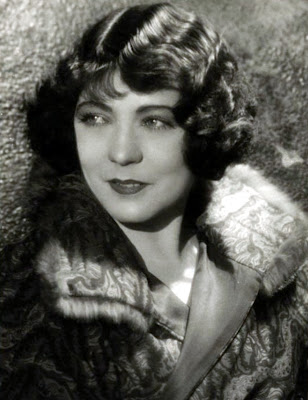 This essay is Thrilling Days of Yesteryear’s contribution to Gone Too Soon, a blogathon spotlighting stars that, though shining brightly, sadly burned out too soon.  For the full list of participants, check out the host of the ‘thon’s (Jessica of Comet Over Hollywood) post here.

On the subject of classic films…my parents and I are frequently at odds.  Not so much my mother, who can almost sit down and watch Casablanca as many times as I can…the friction comes mainly from my father, whose movie-watching policy can be charitably described as “one and done.”  He doesn’t care for anything in black-and-white (never missing an opportunity to chide me about my fondness for the monochromatic art despite the fact that we have a color television) and because of his lifelong desire to become a stand-up comedian, will often offer this editorial comment after I watch a movie I’ve seen more than once: “I see it ended the same way this time.” 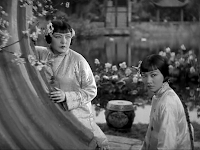 Classic movies are made to be watched—and enjoyed—over and over again.  Not only because it’s a pleasurable experience (when you think about it, have you ever refused to ride a roller coaster because you did it one other time already?) but because it’s possible to miss details and other minutia you overlooked the first time.  The first film I remember silent film actress Renée Adorée making an impression on me was 1927’s Mr. Wu, which I saw back in 2007 and even wrote about here on the blog.  It wasn’t the first of her films I had seen, because after a glance at the IMDb I realized that I had made her acquaintance before in a 1922 Buster Keaton short, Day Dreams, and what is probably her best-known showcase, the French peasant girl, Melisande, befriended by dogface Jim Apperson (John Gilbert) in King Vidor’s classic war film, The Big Parade (1925). 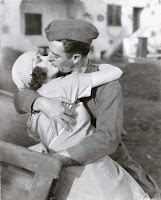 Now…I can sort of understand how Adorée made little impression on me in the Keaton film.  It was one of her earlier roles, and women in Buster’s films are often little more than props—that sentiment once expressed by Mrs. (Eleanor) Keaton in the documentary Buster Keaton: A Hard Act to Follow.  But I’m still puzzled as to how I could have only casually noticed her in Parade, where she is nothing short of breathtakingly exquisite.  The first time I saw Vidor’s masterpiece, I was probably distracted by the spectacle of the film…but when I sat down with a second time, I found myself hypnotized by the chemistry of Adorée and star Gilbert, and how I enjoy their courtship so much more than anything in the film.  (The scene where the two characters overcome their language barrier by Gilbert demonstrating the art of chewing gum is one of the most amazing scenes in silent film, as her touching goodbye to her “sweetheart” as he prepares to go off to battle.)

Landing a role in an Australian film called 500 Pounds Reward (1918) whetted her appetite for movies—she had just turned twenty by that time.  Leaving , she arrived in City, where she continued stage work until 1920 and a part in a Fox film (directed by Raoul Walsh), The Strongest.  The studio officially changed her name to Renée Adorée, which was French for “reborn” and “adored.”  Her second feature, Made in Heaven (1921), co-starred Tom Moore—whom she had met in that same year and tied the knot with in February after a mere six weeks of courtship.  Not surprisingly, the marriage didn’t last long—she divorced in 1924, and three years later married William Sherman Gill before splitting with him in 1929.  (Adorée would later work with Tom’s brother Owen in the 1926 melodrama The Blackbird, which starred her Mr. Wu co-star Lon Chaney.)

Much of Adorée’s film work did not survive the ravages of time and neglect, so many of her performances on celluloid are no doubt lost to the ages.  One film that was believed to be lost is The Eternal Struggle (1923), which was discovered in a Russian film archive in 2010 and a digital copy now resides in the Library of Congress.  It was a film she made for Louis B. Mayer, and she would eventually find herself at newly organized M-G-M by 1924, appearing in such films as The Bandolero (1924), Exchange of Wives (1925), Excuse Me (1925; a comedy starring Norma Shearer) and Man and Maid (1925).  The last of these sounds most intriguing; Adorée plays a wicked Parisian woman who comes between a man (Lew Cody) and his secretary (Harriet Hammond) in a movie based on a novel by Elinor Glyn. 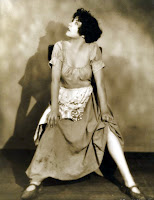 It was The Big Parade that elevated Renée to stardom—although it wasn’t her first film with John Gilbert (she had parts in three films Gilbert made at Fox: Honor First and Monte Cristo in 1922, A Man’s Mate in 1924) he would be her best-remembered leading man (and like Renée, left this world for a better one far too soon).  Two of the films they appeared in have been shown on TCM and I have been lucky to see both of them—the first being another Vidor-directed vehicle in La bohème (1926).  Adorée plays Musette, the girlfriend of one of Gilbert’s artist pals (played by Gino Corrado) who befriends Gilbert’s leading lady in the film, Lillian Gish (the tragic heroine).  Renée is a bit overshadowed by Gish (whom Bette Davis once made a memorable statement with regard to close-ups) but she does have some nice moments; she is referred to by Gilbert’s character as a “light woman” which I’m guessing is a euphemism for the more popular term “courtesan.” 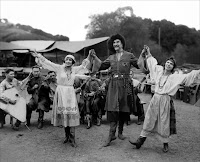 The other Gilbert-Adorée collaboration is The Show (1927), a film that I was admittedly more interested in because it was directed by Tod Browning…who demonstrates his lifelong fascination with the bizarre and grotesque (the film is set against the background of a carnival sideshow, as is his silent works The Unholy Three [1925] and The Unknown [1927]) by casting Gilbert as a carnival barker whose rakishness (his name is Cock Robin, which should indicate the degree of subtlety here) attracts the attention of a sheep merchant’s daughter (Gertrude Short) whose father is murdered after a botched robbery attempt.  She asks Gilbert to keep the money safe—he’s going to keep it permanently despite the pleas of Adorée, who answers to “Salome” (the role she plays in the sideshow) and whose jealous boyfriend (Lionel Barrymore) is out to get Gilbert.  Renée isn’t quite as glamorous in this outing as in some of her other films, but I think she gives a wonderful performance as a woman who’s not all what she appears to be at first notice.  The two of them also appeared in The Cossacks (1928) and Gilbert’s first talkie (though released after the infamous His Glorious Night), Redemption (1930)—but I’ve not had the opportunity to see either of these.

The only other Adorée film I’ve been fortunate to catch is the late Western silent Tide of Empire (1929) directed by the legendary Allan Dwan and co-starring Tom Keene as the two-fisted hero (emoting under his real name, George Duryea).  Set against the background of the 1849 California gold rush, Renée is Josephita Guerrero, the daughter of a wealthy cattle rancher (George Fawcett) furious that their placid existence has been set asunder by the discovery of the precious metal; Keene (whose character’s name is “Dermod D’Arcy”) tries to assuage her fears by telling her that even though people are mowed down by “progress” and the titular event it’s all for the good (of course, he just won her father’s spread in a horse race, so he’s understandably a bit biased).  It’s nothing earth-shaking story wise, but it’s well-made and acted…and Renée makes an amazingly fetching senorita. 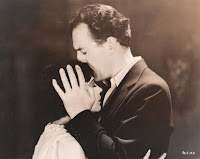 The transition from silent to sound films was the death knell for many Hollywood stars and Adorée was just one more actress to stumble in “the talkies”…but much of this had to do with the fact that after appearing in some forty-five films (the last was a talkie with Ramon Novarro, 1930’s Call of the Flesh) Renée was in poor health and diagnosed with tuberculosis.  In fact, her physician had advised her not to complete Flesh but she insisted on doing so and as a result spent a two-year stay in an sanitarium in an attempt to recover.  She was thought well enough to continue her career at the time of her release in April 1933, but her health quickly deteriorated and passed away a few days after her 35th birthday in a Tujanga, CA health resort.  Leaving no will and a paltry sum of $2,429 to her mother in , Adorée’s further film potential may have been stonewalled but her legacy has earned her a star on the Hollywood Walk of Fame…and a watchful eye for more of her films from yours truly.
Posted by Ivan G Shreve Jr at 6:30 PM

I've only seen Mr. Wu and The Big Parade, but she made quite an impression on me. Exquisite woman and wonderful silent actress. How sad to go so young and after all that work, with so little to leave. Very interesting article about someone many of us don't know that well.

Nice profile of Adore. You are right about her chemistry with Gilbert in The Big Parade.

Wonderful write up on the silent actress, Adore. After reading your review I want to see more of her films.

Ivan, lovely to see you remembered Renée Adorée in a blogathon dedicated to actors and actresses who left us too soon. I was first introduced to Renée in "The Mating Call", thanks to a male friend who has a wild crush on her. I have seen most of the films you mentioned, and several of them more than once. I want to see her in "Man and Maid" and "The Forbidden Hours" in which she appeared with Ramon Navarro. I tried endlessly to convince my friend of the existence of the film, which even Kevin Brownlow claimed was a lost film. I was recently vindicated when the film began appearing at film festivals. Thanks again for a lovely tribute to a lovely lady, Renée Adorée.

Great piece. Adorée is someone I know of but know little about. I loved her in The Big Parade and The Show (two of my favourite silents) but have not seen anything else the beautiful actress was in. I do so love reading about the nooks and crannies of cinema I know little about. Thanx for such a write-up.

Ah ha, I wondered if you were doing a post on Renee for the blogathon!

I really loved Adoree in Mr. Wu, though I seem to have grown impatient with silents in general the older I get. I hope it's just a phase. She was very good in The Show (are you the one I finally got a copy of that from? If so, thanks again!) which was a rather flat Browning affair, surprisingly.

Also surprising are the number of silent film stars who died so very young. Life was cheap in the days before antibiotics, it seems.

Just watched The Blackbird with Miss Adoree. Found her to be mezmorizzing.
I was captivated by her style.
She did a lot of films for her age.
Sad that she died so young from TB.
She had a lifetime of work ahead of her.