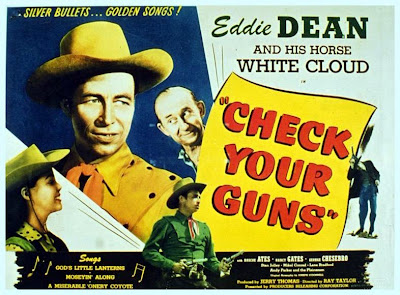 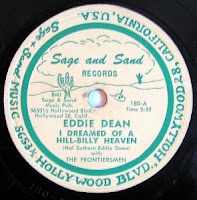 Two weeks ago in this space, I made a joking reference to a country music hit that Tex Ritter recorded in 1961, I Dreamed of a Hillbilly Heaven, in talking about his 1937 oater Trouble in Texas.  The tune would be Ritter’s last trip to the Top Ten on the country charts (it also was a Top 20 Pop hit), but the song was actually a remake that had been recorded six years earlier by singer-songwriter Eddie Dean.  Dean, who recorded the tune penned by Hal Southern (the inspiration actually did come in the form of a dream Hal had), took the tune to the #10 position in 1955 for the small Sage and Sand label…giving that company its only chart hit.

Dean’s country music legacy was an important one, not only as a singer but as a wordsmith—the man born Edgar Dean Glossup in 1907 in Posey, TX wrote a goodly number of the songs that he recorded throughout his lengthy music career, which began at the tender age of sixteen.  He and his brother Jimmie (not the Big, Bad John guy) formed a duo that often performed on the National Barn Dance radio show over WLS in in the early 1930s, and began making records shortly after that.  But Eddie wanted to try his luck in Hollywood by moving out west in 1936—and two years later plied his new trade in a number of Gene Autry and Hopalong Cassidy westerns with bit parts and small roles, both credited and uncredited (he additionally turns up in several serials, including The Lone Ranger Rides Again and Don Winslow of the Coast Guard).  His big break came later in the forties when he was cast alongside such B-western stalwarts as Ken Maynard (in Harmony Trail) and Bob Steele (Wildfire).

And then he really lucked out—with his own Western series, beginning with a production from “the new” PRC, Song of Old Wyoming (1945).  Eddie may have been the headliner in that film, but all of the fan mail went to a supporting player whom I discussed last week—“Lash” LaRue.  (It would also be SOP in two other Cinecolor westerns he made with the “King of the Bullwhip,” The Caravan Trail (1946) and Wild West (1946), until the studio wisely chose to give LaRue his own series as well.)  From that point on, the only person Dean had to worry about upstaging him was his faithful sidekick Roscoe Ates, who played the ever-loyal “Soapy” Jones

Check Your Guns (1948) is a cut above the average Dean programmer even though the plot isn’t anything you haven’t already seen before.  In the small hamlet of Red Gap, (no, Charles Laughton isn’t in this), law and order is having difficulty getting a toehold thanks to the machinations of Brad Taggert (I. Stanford Jolley), a cattle baron who has the town in his greasy clutches.  His henchman Slim Grogan (Lane Bradford) shot and killed the father of rancher Cathy Jordan (Nancy Gates) in an attempt to allow Taggert to take over their ranch—Judge Hammond (William Fawcett), the alleged legal representative in town, issued a “not guilty” verdict in Slim’s favor, buying the man’s claims of self-defense.

But help is on the way in the form of our hero (who essentially plays himself).  Eddie’s barely had time to shake the dust off his boots when Red Gap’s sheriff (Ed Cassidy) is gunned down by another of Taggert’s goons, Ace Banyon (Mikel Conrad).  Eddie, his pal Soapy (the town barber) and a few of their friends (ranch hands played by Andy Parker and the Plainsmen) haul Ace off to the Grey Bar Hotel, and having meted out justice Eddie is convinced to take over as sheriff.  His first order of business is to institute the titular ordinance, requiring every man moseying through Red Gap to leave their guns at the sheriff’s office.  Some folks simply don’t want to play by the rules, however, including a pair of gunmen (one of them played by the late Russell Arms, who passed away in February) hired by Taggert to dispose of Sheriff Dean.  When releases Ace in the same manner as he did Slim, the forces of law and order decide enough is enough and arrange for the Solemn Ole Judge to be replaced with a more honest adjudicator, Judge Walsh (Steve Clark).  It takes our hero all of fifty-three minutes to make things right in Red Gap before he rides off into the sunset on his faithful steed White Cloud…though for reasons I still can’t fathom he turns down an offer to stay with Cathy to go traipsing off with Soapy.

Roy Rogers and Gene Autry considered Eddie Dean to be the gold standard of singing cowboys, which is certainly heady praise indeed…and the musical numbers in Guns are quite entertaining, including a song Dean co-wrote that’s performed by Ates, Parker and the Plainsmen (A Miserable ‘Onery Coyote) as the movie commences and a nice little duet between Eddie and leading lady Gates that brings the curtain down on the entire sagebrush saga (Moseyin’ Along).  Dean’s female co-stars often alternated between Jennifer Holt and Shirley Patterson (among others), but it’s a shame this was Nancy’s only appearance in a Dean western—they have a nice chemistry and she sings quite well. 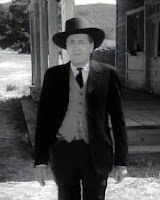 The action sequences and fistfights are handled well by Bob Woodward (Dean’s double), Dee Cooper, Carl Matthews and Wally West (like the stuntmen at Republic, they also doubled up in bit parts) under the competent direction of our old pal Ray Taylor, who keeps things going along at a brisk clip.  I thought the situation involving the “firing” of Judge Hammond was handled in an interesting fashion in Guns: normally, westerns have an election that the bad guys try to fix until the good guys prevail at the last minute…but in this one, Dean just escorts Hammond to the county line and tells him to keep on moving particularly if he’s concerned about his health.  There is also a banker character in the film, Farrell, who turns out to be in league with the head villain…and while this is certainly nothing surprising, George Chesebro’s portrayal of the snake is interesting to watch because he switches sides back-and-forth so often you almost have to have a score card to keep track. 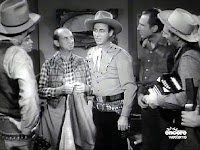 Eddie Dean made a total of eighteen westerns for Producers Releasing Corporation between 1945 and 1948 before hanging up his silver screen saddle; the “singing cowboy” craze had sort of cooled by then and he never was really what one would call a critical darling (a NY Times review once remarked: “Instead of the usual black and white, Eddie Dean's newest western has been shot in Cinecolor, but it's not an improvement; you can still see him”). He appeared briefly in an ABC-TV Western in 1950 called The Marshal of Gunsight Pass (with his saddle pal Roscoe Ates and TDOY goddess Jan Sterling), which was telecast live from a studio lot at the famous Iverson Movie Ranch in Chatsworth, CA (where Check Your Guns happened to be filmed, in an amusing coincidence).  He did a few guest appearances on TV after that but concentrated more on his musical career as a performer and songwriter (in addition to Hillbilly Heaven his best-known effort remains One Has My Name (The Other Has My Heart), a #3 country hit for Jerry Lee Lewis in 1969, and was one of the founding members of the Academy of Country Music in 1964. Before his death in 1999, singing cowboy Eddie Dean was also recognized by his peers with induction in both the Cowboy and Western Music Association Halls of Fame…and since many of his PRC B-pictures have been spotlighted on Encore Westerns from time to time, this definitely won’t be the last we hear of him here.
Posted by Ivan G Shreve Jr at 4:00 PM

You know your music and your B Westerns Ivan but that doesn't surprise me, being a genius and all!

I really enjoyed this and I'm going to email the link to my dad. I'm sure he's seen Check Your Guns a few times.
Have a great weekend and Giddy Up, Keep Your Powder Dry!
Page