“So they call me ‘Concentration Camp’ Ehrhardt, eh?” 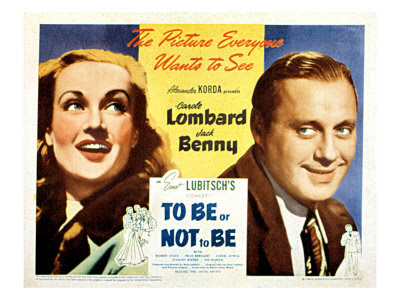 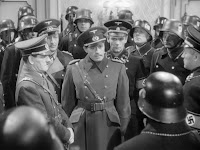 I thought we’d roll out a honkin’ big sheet cake (like I need a reason) and celebrate the 70th anniversary of To Be or Not to Be (1942), Ernst Lubitsch’s classic WW2 satire that’s a huge favorite of yours truly (the fact that one of my comedy heroes, Jack Benny, stars in it might be a reason) and a movie that is…well, it’s kind of a cliché to say it but I still find myself awed by its brilliant mix of comedy and suspense.  I wrote a little tribute to the film over at Edward Copeland on Film…and More, and I hope you’ll take a moment to check it out when you get a chance.  (If you've never seen the film...Hulu will be more than happy to accommodate you.)
Though I knew in advance what today’s “Overlooked Films” movie was going to be, my plans to work on it last night went awry and so I was very late in getting it posted, for which I humbly apologize.  I even changed the design to allow me to work on it this morning, only to find myself accompanying Ivan, Sr. to the post office early in the a.m.  (This wasn’t a total loss, in that I actually got the Life of Riley prizes out after a slight delay…but I’m telling you, don’t ever ask me to become a super villain because I swear nothing will ever get done around here.)

The Life of Riley CD sets served as a reminder that I should jog the memory banks of interested TDOY readers by mentioning that the deadline for entering the latest blog giveaway for a set of Phil Harris-Alice Faye shows (two copies of the Radio Spirits release, Private Lives, originally priced at $39.98) is creeping up on us—you need to get an e-mail with “Phil and Alice Giveaway” in the subject header to me at igsjrotr(at)gmail(dot)com before Thursday (March 8) at 11:59pm EST.  Friday morning I will choose two winners via Random.org and then—knock wood—will mail out the prizes to the lucky people…faster than I did the Rileys, anyway. 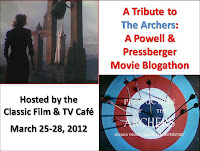 Last week I mentioned that the Classic Film & TV Café had a blogathon in the works to salute master filmmakers Michael Powell and Emeric Pressburger from March 25-28; there’s a post over there now that will give you a rundown on what films will be covered and which days they will appear.  (My reputation for procrastination precedes me—I’m slotted for the final day on the 28th.  I should also point out, though, that if you’re interested in participating—it’s not a CMBA event, so everyone can crash the party—the deets can be found at the Café.)
There’s also additional information available about the Gone Too Soon blogathon at Comet Over Hollywood; according to webmistress Jessica around 30 bloggers will be participating and if you’d like to get in on the action she’s even got a list of subjects that haven’t been covered yet.  (I also drew the final day in this ‘thon, so look for a post here on March 10.)
Posted by Ivan G Shreve Jr at 5:00 PM

A very nice piece on "To Be or Not to Be", but I do have to correct one slight factual error. Edwin Justus Mayer was a good friend of my father (when I was a small child, I used to visit him with my father -- unfortunately Mayer
died before I was old enough to know his work). Although it was Lubitsch's idea to cast Jack Benny in the role, the part was actually conceived by Mayer for John Barrymore. As a huge Benny fan, I have always been grateful to Lubitsch for giving him such a magnificent part, but it is interesting to imagine the film with Barrymore in the role.

Hey, many thanks for the correction, Mr. Bazzle. Most of the sources I'm familiar with don't mention the Barrymore angle so it's always great to learn something new. And I agree that it would have been interesting with John -- a reunion with his Twentieth Century co-star Lombard.