"...in this business there's only one law you gotta follow to keep out of trouble: Do it first, do it yourself, and keep on doing it..." 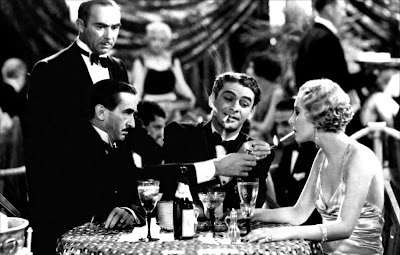 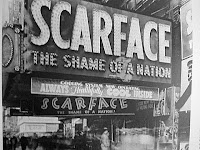 You’re going to have to brace yourselves for this revelation…because I know there are a number of people who are simply not going to believe this.  The very first time I saw the 1932 gangster film classic Scarface—which celebrates its 80th anniversary today—was on the cable network.  Honest to my grandma, I’m not making this up.  Once upon a time, the channel whose notoriety today resides in how many Law & Order: Special Victims Unit or NCIS marathons they can run in the span of a week actually showed older movies: among the TDOY faves that I first caught there were Cat People (1942) and Targets (1968).  (And a fistful of features that rarely turn up on any outlet today: Taking Off [1971], Your Three Minutes are Up [1973],  Citizens Band [1977, aka Handle With Care] and—as Bill Conrad used to say on Rocky & His Friends—“a host of others.) 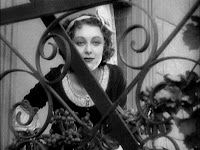 Despite my enthusiasm for the other two movies in the “Gangster Trilogy”—Little Caesar (1931) and The Public Enemy (1931)—Scarface is my favorite of the three; a work of intense thematic complexity and good old-fashioned pre-Code naughtiness that introduced me to two of my favorite unsung actresses, Karen Morley and (heavy sigh) Ann Dvorak.  I leapt at the opportunity to toast the film at Edward Copeland on Film…and More, so while I’m putting the finishing touches on today’s riveting installment of Jungle Queen (1945), I invite you to saunter on over and have a look at your leisure.
Posted by Ivan G Shreve Jr at 9:30 AM

I'd forgotten USA used to show old movies! You're right, a lot of cable channels filled out the late night and early morning hours with old movies. Nowadays it's all commercials.

Shamefully, I admit I hadn't even seen the original Scarface until... oh, I guess 6 months ago. Sometime within the last year. It's amazing the films I have not yet seen.

Definitely agree. Despite Little Caesar and The Public Enemy's charms, Scarface is head and shoulders above them.