Here’s not looking at you, kid 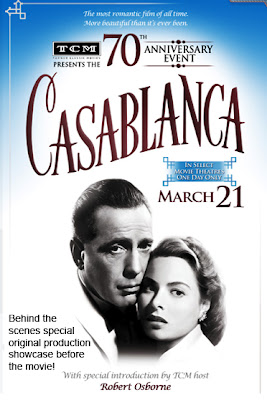 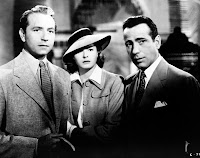 You’ve no doubt heard the scuttlebutt on the Internets that my favorite classic movie of all time, Casablanca (1942), will be shown in select theaters across the U.S. this evening at 7:00pm as part of a 70th anniversary celebration engineered by Warner Brothers and, of course, The Greatest Cable Channel Known to Mankind™.  It’s one of those deals where they wanted you to purchase your tickets in advance…something that I would have been only too enthusiastic about doing so until I hit upon one teensy snag.
They won’t be showing the movie in .  Here’s a list of the lucky cities that will get to play it again, Sam, and I was slightly bummed about the snub the first time I glanced at the list.  But I’ve seen on the big screen before (several years ago in ) so it’s not a crushing disappointment—what I can’t quite figure out is this part, courtesy of the press release:
The event will begin with Turner Classic Movies host Robert Osborne taking audiences behind the scenes of this epic love story in a special original production showcasing stories from those who were on set and those who simply admire this timeless classic. Audiences will then be able to see again on the silver screen this beautiful and timeless classic. 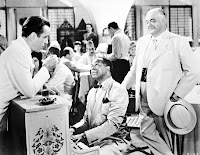 A few years back, Bobby Osbo hosted an annual event here in the Classic City entitled The Robert Osborne Classic Film Festival but ever since the University of Georgia “postponed” the event two years ago (blaming it all on the economy) the film fest has become a mist in the memory, and Rob has moved onto to other pursuits like the honkin’ big TCM Classic Movie party held in Hollywood each year.  (I had tickets to see two of the presentations in 2010, until that whole hospital deal reared its ugly head.)  You would think that he could have pushed aside some room on the circuit to give a shout-out to the hamlet where the classic film festival wheels first got rolling, but apparently this is not the case.  (Ingrate.)

But don’t let my loud sour grape-munching spoil the experience for those of you who are getting to go this evening; my RS compadre Rodney Bowcock mentioned on Facebook that he’s going, though I don’t know if our pal ClassicBecky will still be able to attend (she had a small surgical matter to attend to this morning, and I hope she’s back in the pink PDQ).  The people putting on the show have also got a contest you can enter to win a romantic weekend getaway at a B&B (plus din-din) for two—and all the details are here.  (They want you to do this on Facebook, with the photo and the “My most romantic experience” stuff, just to let non-Facebook fans know.)
Posted by Ivan G Shreve Jr at 12:15 PM

I was tempted, too, until I saw it wasn't playing anywhere in the entire State of Nebraska. *sheesh* Still, I will take solace in having seen Casablanca on an IMAX screen several years ago, and you can't beat a five-story tall image of Peter Lorre wigging out as the Nazis come for him.

Man I wish I could've seen this on the big screen.

They probably figured the Kansas City dates would serve Kansas and Nebraska both (all the Kansas cities listed are really suburbs of KC). None in Iowa, North Dakota, Vermont, or Wyoming, either.

An excellent point. I think Athens is just like your hometown (except the Chinese food is better and it's much more temperate, weather-wise) and we have a very nice arthouse cinema that could have accommodated Casablanca fans. To hear that there were no showings in Iowa (sister Debbie's neck of the swamp) or Nebraska (Brother Kelso) is mind-boggling.

And of course there isn't a single city, town, or unincorporated hamlet in Canada to get the movie. Like you I've seen it on a screen larger than a TV - at my university's small theater (now closed) that was operating as a rep house at the time.

Regarding missing Casablanca on the big screen, you may take solace in the fact that these fathomevents things are actually satellite broadcasts at 1k resolution, max 16:9 aspect ratio, and stereo sound only. So it's like watching a giant tv.

you may take solace in the fact that these fathomevents things are actually satellite broadcasts at 1k resolution, max 16:9 aspect ratio, and stereo sound only. So it's like watching a giant tv.

And I'll bet there isn't a hot wing or cold beer in sight, either. Thanks for the info, Barry...consider the solace taken.

Looks like the event wasn't as big of a success as some had hoped. I think 10-15 minutes was missing at an Atlanta showing.