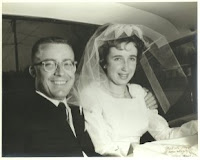 Fifty years ago on this very date, a young girl from said “I do” to a roguish young man from the wilds of who just happen to have a bitchin’ Cadillac.  And lo and behold: the blogosphere’s wackiest parents were born…though they wouldn’t technically become parents until the following September (and even though I’ve been called one often enough, I need to reassure the TDOY faithful that it was not a shotgun wedding).

Ivan (Ike) Sr. and Irene Shreve are celebrating their golden one today—but lengthy marriages are kind of a thing in my father’s family; my grandparents (Steve and Bertha) were married for fifty-plus, and my Aunt Jane and Uncle Marvin chalked up the big five-o this year as well.  (My Aunt Nat/Uncle Ted are also enjoying their twilight years, and before the passings of my Uncle Joe and Uncle Don they both were well acquainted with marital longevity as well.)  If you were to ask me how “the ‘rents” continue to make it work I’d be stymied for an answer—I only know that though some of the arguments would rival any sitcom couple (Frank and Marie Barone are the first that come to mind) my Mom and Dad genuinely love and respect one another, and fifty years in the trenches hasn’t changed that one iota.

Dad got Mom a nice watch to mark the occasion, and she in turn purchased for him a new recliner that has not only gotten a good workout from the person sitting in it (Dad) but has inspired a new round of wisecracks from their smartass son (for some reason the chair is higher than his old one, so I have suggested getting him a stepladder in order to allow his grandson to approach the recliner come lap time rather than teaching Davis to pole vault).  There will be a celebratory dinner at the Double K Ranch this evening, followed by a surprise that will knock both of their socks off.

As such, I’m going to have to put the start of Serial Saturdays’ presentation of Don Winslow of the Navy off until next Saturday.  (I’m also racing a deadline on an outside project, so…)  So, yeah—this was the earth shattering announcement I alluded to in my last post and while it might not seem that way, I just wanted to give a shout-out to my favorite couple.  Mom and Dad…I love you both very much.
Posted by Ivan G Shreve Jr at 10:30 AM

Congratulations to the happy couple!

O how cool! Congratulations to the Shreves on the golden anniversary, and thanks for somehow finding the time to raise 'em up young Junior here.

These days it IS an earth-shattering announcement when a couple is able to keep renewing their love and commitment every day for so many years. Congratulations to your Mom(Irene to me) and your Dad (the remote bandit) on their very special anniversary. They must have done something right to be able to put up with you all these years -- um, I mean, to have raised such a great son!
From Errolette

By the way, my parents went through the same "first child" ribbing! My brother was born nine months and 12 days after their wedding!

Congratulations to your parents on their anniversary!

This is such a beautiful tribute to your parents and their marriage. Congratulations to them!

These are some great shots, especially the drive-in shots. I watch at least one movie on Turner Classic Movies every day, and the shots remind of some scenes in those movies.

Nice blog work. I came across your blog while “blog surfing” using the Next Blog button on the Nav Bar located at the top of my blogger.com site. I frequently just travel around looking for other blogs which exist on the Internet, and the various, creative ways in which people express themselves. Thanks for sharing.

Ivan, all the best to your parents. Hanging in there for 50 years is a huge accomplishment. And good for you for sharing it with all of us.

Congratulations to the happy couple. Mattapoisett, Mass. girl...your papa knew how to pick them.

Congratulations to you and your folks!

IKE: Smile, honey. Say, you think we'll ever have kids?

IRENE: Sure. Hell, there's a good chance we're having one right now.

IKE: Uh, Can it at least wait until after the wedding?

IRENE: By the way...what the heck is that morbid growth on your jacket lapel? You know, Palm Sunday isn't until April this year.

IKE: (NERVOUSLY) Right, right...Hey, is that a gun in your dad's pocket, or is he just unhappy to see me?

IRENE: Oh, relax. I bet in 50 years we'll laugh about all this. Of course, our gestating spawn will be a half century old by then, and probably using some kind of futuristic home ENIAC machine to random strangers around the world all about our private life.

IKE: What! I don't want the intimate details of our personal business freely distributed on punch cards!

Congrats! I wish them many happy years to come.

What a wonderful post, Ivan! A big congrats to your parents. :)

Oh, those pictures are so sweet! I'm so glad you posted them, Ivan, and best wishes to your parents!

You know, Ivan, "Los Parentes Yesteryear" really does have a dashing ring to it! Happy Anniversary to the lovely Ike and Irene on your golden anniversary! Please accept Team Bartilucci's joyful wishes from Dor and family on this momentous day, and have a very Merry Christmas and Happy New Year while you're at it! :-D

Congrats to the golden couple! When I proposed to my wife, I got a mug with a pig on it (she wasn't expecting a proposal and the mug is actually very cute...I still cherish it).

Congratulations!! To your wonderful parents on their anniversary!