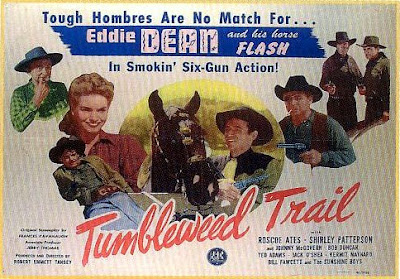 Well, due to some time constraints and a project or two that I am currently juggling, I decided that for this week’s adventure on the Old Blog-holm Trail I’d grab the first DVD-R from my pile of recorded B-Western material and select the first oater I stumbled across.  It’s Tumbleweed Trail (1946)—and it’s not to be confused with an earlier Western made with that same title in 1942 (that starred “The Frontier Marshals”: Bill ‘Cowboy Rambler’ Boyd, Audrey ‘Art’ Davis and Lee Powell) even though both films were made at Producers Releasing Corporation.  This one stars singing cowboy Eddie Dean, accompanied by his loyal sidekick Soapy Jones (played by Roscoe Ates). 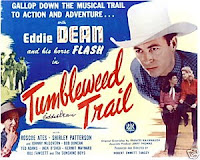 Chuck Anderson at The Old Corral notes that among B-western fans and buffs, Republic was king as far as oaters were concerned...followed by Columbia and Universal.  Then came Monogram, and at the bottom of the barrel was PRC.  Dean, ‘Lash’ LaRue and Buster Crabbe were the studio’s big cowboy stars, but despite their sincerest efforts PRC’s westerns often couldn’t overcome their production shortcomings and minimal budgets.  So when you go into a PRC oater you shouldn’t expect much…and that’s precisely what you get with Tumbleweed Trail.

It’s a tale told a million times onscreen: the evil relative of a successful cattleman plots to take over his operation…and in this case, the relative is half-brother Brad Barton (Bob Duncan)—who has his henchies (Carl Mathews, Lee Roberts, Matty Roubert) ambush rancher Bill Ryan (Kermit Maynard) and apparently leave him as a drowning victim.  With the help of an attorney named “Lawyer Small” (everybody actually refers to Ted Adams’ character in that fashion, almost like “Barber Andrews” or “Undertaker Graves”), Barton emerges as the sole heir to Ryan’s spread…effectively cutting out daughter Robin (Shirley Patterson) and son Freckles (Johnny McGovern).  Robin is understandably nonplussed about being screwed over by her pop in the will (when she protests, a sexist judge played by squinty William Fawcett crows: “You know, it’s a strange thing…but I never have read a will that pleased a woman”) and decides that Brad will take possession of the ranch over her dead body.  She’s quite proficient with a rifle, and both she and her brother have been holding Barton and his goons at bay.

Enter our hero and his sidekick—though I should point out we see them at the beginning of the film, singing the title song with The Sunshine Boys (not Walter Matthau and George Burns…but rather M.H. Richman, A.L. Smith, J.O. Smith and Eddie Wallace).  They offer assistance to Robin (they’ve already had an encounter with Barton, and learn for themselves what a wanker he is), even to the point of helping her get back the cattle that Barton and Company appropriated.   When Barton brings in the sheriff (Frank Ellis) to put the stamp on approval on his villainy by accusing Eddie of cattle stealing, Dean is conveniently able to produce a bill of sale for the bovines—the late Mr. Ryan apparently sold them to Edward for the princely sum of one dollar.

Finally, Barton resorts to the timeworn gambit of trying to shut out Eddie by cutting off his water and grazing rights…and when that doesn’t work, he brings in a hired gunman named “Gringo” (Jack O’Shea) who’s supposed to dispose of Dean but winds up switching sides (always get references when you hire a gunslinger, good people).  At the climax of the film, the sheriff is once again brought in because Lawyer Small has concocted a plan to frame Eddie for the death of rancher Ryan…a plan that backfires somewhat when Ryan turns out to be very much alive in a “surprise” ending that really surprises no one.  Barton and his men shoot it out with the bad guys, expending a lot of gunplay that gets him nowhere…and at the end of the movie we learn that Eddie had been asked to investigate cattle thefts by the U.S. Marshal (was this common practice, farming out your work to others?) when he came across the injured Ryan and the two men decided to pretend Ryan was dead to smoke them varmints out.  This less than 60-minute lackluster sagebrush saga then calls it a wrap as Eddie and Soapy ride off. 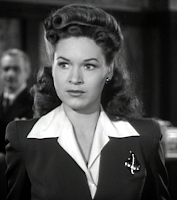 Eddie Dean and Shirley Patterson, the leading lady of Trail, made a total of four films together—apparently the studio was trying to establish a precedent by casting her in this first venture and the subsequent Driftin’ River (1946), Stars Over Texas (1946) and (1947).  Patterson started out in the picture business as a contract player at Columbia, and spent most of her time at that studio in walk-on roles in their features (Boston Blackie Goes Hollywood, The More the Merrier) and two-reelers (she’s in two of the Three Stooges’ comedies, Spook Louder and Phony Express).  Her big break came in 1943 when she landed the female lead in the original Batman serial but when the studio dropped her option a year afterward she worked at M-G-M before finally finding a home in the Dean westerns.  Patterson retired from show business in 1947 to start a family—but in the mid 1950s she briefly went back into the business as Shawn Smith, appearing in several sci-fi classics (World Without End, The Land Unknown, It! The Terror Beyond Space) and in guest appearances on such TV shows as The Life and Legend of Wyatt Earp and Bachelor Father.  She then bid farewell to the world of entertainment a second time and was content before her passing in 1995 to keep occupied with volunteer work at the John Tracy Clinic for the Hearing Impaired, founded by her good friend Spencer Tracy.

Shirley’s one of the few positive attributes of Trail, which is unfortunately one of those Westerns where everybody seems to be phoning it in (even Dean’s musical material is pretty sub-standard) though I did chuckle at Ted Adams’ villainy (his “Lawyer Small” issues a threat to Patterson’s character that she’ll vacate the ranch within five days or “[I’ll] eat my horse!”) and a moment where Barton’s henchmen start pissing and moaning that they don’t know if they can trust him (if you can’t win the confidence of the people working for you…you’re definitely in for it by the time the fifth reel runs out).  I could have done without McGovern’s presence (just not a kid actor fan…sorry) and really, as a whole, this movie is so unforgettable I had to run the last ten minutes over because I forgot how the darn thing ended.  Tumbleweed Trail is recommended for diehard B-western fans only.
Posted by Ivan G Shreve Jr at 4:00 PM

I loved TUMBLEWEED TRAIL, so I must be a diehard. :) It was a bit phone-innish, but I thought it was a good fun. Most often the success of these depends on the main cowboy; the better the cowboy, without changing a note of the rest, the better the film. It's really old school stuff. Dean ain't no Buck Jones, hahaha.